Matt Hancock announced lockdown restrictions would be in place for several areas in the north of England last night. Naga Munchetty interviewed the Health Secretary on BBC Breakfast and asked him to explain the new rules and what members of the public could, and couldn’t do. However, those watching at home felt the politician “struggled” to give a concise answer and were left utterly confused.

“Good old @MattHancock fudging and bluffing his way through yet another interview.  Talk about promoted beyond his abilities. #BBCBreakfast,” someone tweeted.

Another wrote: “He really doesn’t have a clue what he’s on about. Does he #hancock #bbcbreakfast.”

“This is painful stuff. #BBCBreakfast,” a third remarked.

Someone else mentioned: “Hancock struggling to explain, go out, don’t go out bubble thing. #BBCBreakfast.” 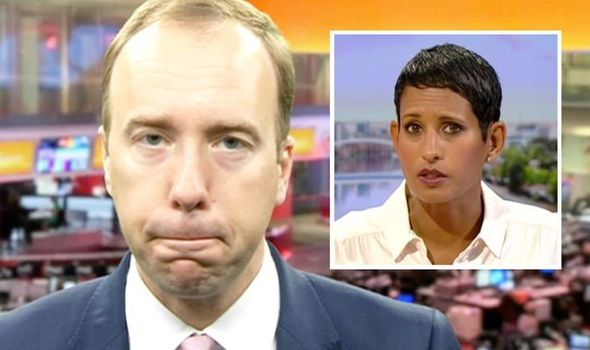 “This is absolutely amateurish from Matt Hancock. Bear in mind this man is our Health Secretary and yet he’s struggling to string a coherent sentence together about the guidelines. If he can’t be clear in what he says, how on earth are others going to understand. #BBCBreakfast,” a viewer wrote.

“You what, Matt? #BBCBreakfast,” a tweet read and another said: “Matt Hancock just needed to say either yes or no. #BBCBreakfast.”

An example of Hancock “struggling” to respond with clarity was when Munchetty asked about places in which people can meet. 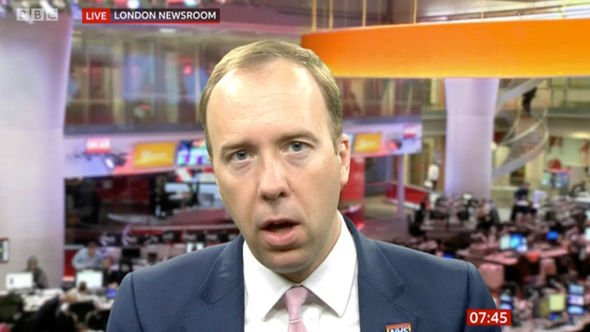 “You can see, you can go to the pub with members of your own household -” Hancock replied but was cut off.

Munchetty interrupted: “It is inevitable isn’t it though that when people do go to the pub, even if you’re a hosuehold there well be another household you may have arranged to see – so they’ll be there.”

“No, meeting another, people form another household in a pub or restaurant or hospitality, is against the guidance and for exactly the reason I set out,” the politician replied.

“But this is all about trying to stop the spread from one household to another which is at the heart of the increase we’ve seen across this area.

“Now we have said two households can meet at a social distance in a public place outdoors, because the evidence is outdoor transmission is much lower,” he added.

The BBC Breakfast host asked: “So a pub garden is fine?”

“An outdoor public place is fine, like a park for instance,” Hancock clarified.

“What about a pub garden?” Munchetty asked again.

“No, well not in hospitality no, partly for the reasons you set out, whereas  in parks there are much more space,” the guest explained.

“So imporant people follow the social distancing rules – I know they’ve been there for a long time and people are yearning to see one another -” Hancock said.

But Munchetty interrupted once more: “I think you’ve made that clear, in one of your tweets you said ‘the reason for this lockdown is due to households gathering and not abiding by social disatancing rules.’

“If today, you see parks in these areas not abiding by social distancing rules, what’s the next step?”

“Well, Naga, we’ve shown throughout this crisis we are prepared to take rapid action if we need to, I don’t want to have to take any further steps,” he replied.

“But meeting at a social distance in parks is okay,” Hancock added but Munchetty said: “That’s not what I was asking!”

BBC Breakfast airs everyday at 6am on BBC One.