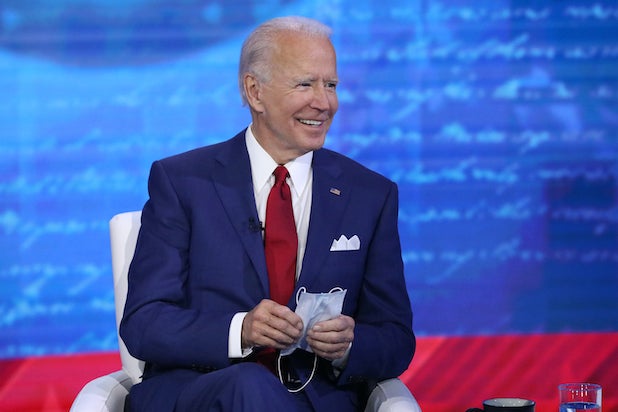 Final Nielsen numbers are in, and Joe Biden has comfortably claimed victory over Donald Trump in the battle of dueling Thursday town halls.

Biden’s town hall on ABC averaged 14.1 million total viewers across the program’s 8 p.m. to 10 p.m. time slot. From 8-9:30, which was actually Biden’s time answering questions with moderator George Stephanopoulos for the benefit of the television audience, his average audience was 15.1 million total viewers. The final half-hour was saved for ABC News analysis, though Biden could be seen sticking around to converse with the sparse and socially distanced studio audience.

Trump’s Savannah Guthrie-moderated town hall, which was simulcast across NBC, and NBCU cable channels MSNBC and CNBC, drew 13.5 million viewers from 8 to 9 p.m. Looking at it head-to-head, Biden’s 14.3 million total viewers from 8-9 made his margin of victory about 800,000 viewers.

Clearly, it was not enough to topple Biden on ABC alone.

Trump’s town hall was live coast-to-coast on cable, but waited until 8 p.m. PT to air on broadcast for west-coasters. A few NBC affiliates in the Mountain and Pacific time zones may have elected to air Trump live. The Biden town hall aired live coast-to-coast on ABC, which is owned by Disney, and does not really have sister cable channels that would make sense for a news programming simulcast.

NBC decided to proceed with its decision to schedule Trump’s event directly opposite ABC’s broadcast with Biden amid backlash on social media and from news personalities, stars and producers — including some of its own talent and creatives.

“We share in the frustration that our event will initially air alongside the first half of ABC’s broadcast with Vice President Biden,” Cesar Conde, chairman of NBCU News Group, said in a statement Thursday. “Our decision is motivated only by fairness, not business considerations. We aired a town hall with Vice President Biden on October 5 at 8pm. If we were to move our town hall with President Trump to a later timeslot we would be violating our commitment to offer both campaigns access to the same audience and the same forum. We hope voters will watch both discussions – ours will be available at any time, free and on-demand on YouTube, Peacock and all our digital news platforms.”