The Big Brother finale is coming up soon and it will feature Kaysar Ridha and Janelle Pierzina.

While finale night will be primarily focused on deciding the Big Brother 22 winner, a lot of fans are excited to see Janelle and Kaysar again.

Since getting evicted from the house, Janelle and Kaysar have each been really busy on social media. And their followers are loving it.

We reported recently on Kaysar hanging out with Keesha Smith and a former Bachelor in Paradise star.

As for Janelle, she has been sharing a lot of her opinions about the current season. Recently, she called Nicole Franzel jealous of Tyler Crispen and that it was the reason why Nicole was treating him so negatively in the house.

Janelle and Kaysar have also been doing live chat online, which is where the idea about what they should do at the season finale surfaced.

Will Janelle and Kaysar wear crowns at the Big Brother finale?

Following one of their Jaysar live chats, several fans were posting on social media about how the two legends of the show should be wearing crowns at the finale.

That idea led to someone offering to make them those crowns. Janelle then responded to the fan by linking Kaysar, and later, Kaysar responded to Janelle’s post by saying, “Let’s do it.” 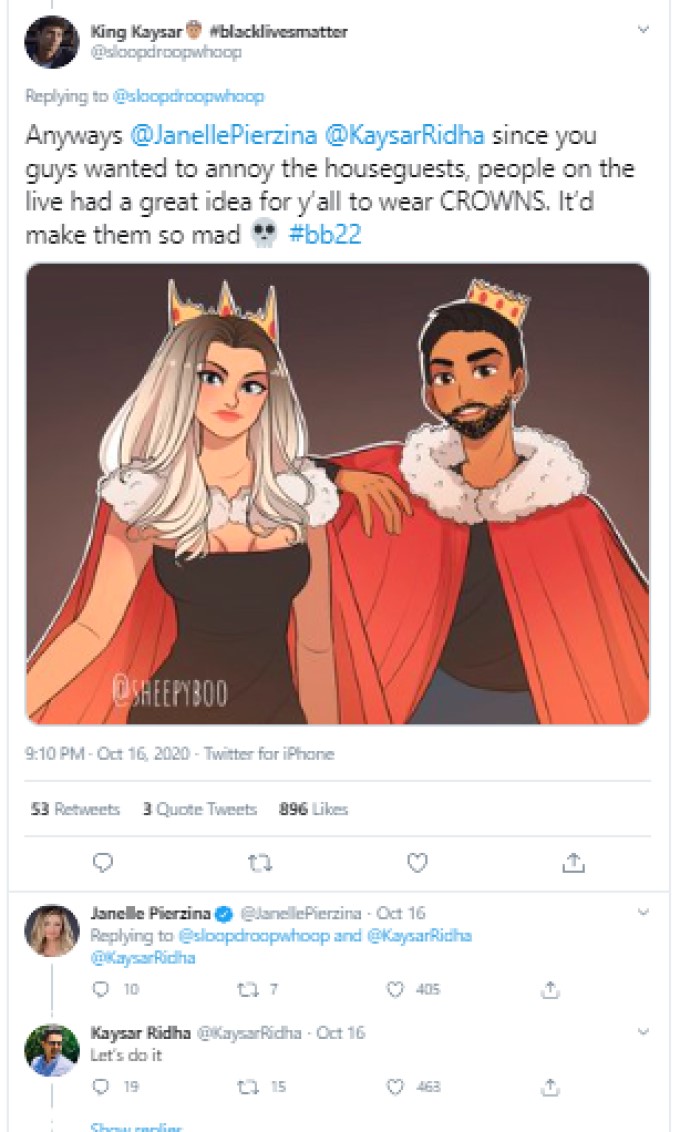 The picture alone really got people buzzing on social media. It represents how a lot of fans of the show continue to view Janelle and Kaysar, despite the fact that they are now watching most of this season from home.

It’s possible that Janelle and Kaysar are just joking about wearing the crowns, but it sure would be funny to see some of the faces on the rest of the BB22 cast if they looked up and saw the duo presented as royalty on finale night.

There are just six episodes left on the Big Brother schedule this fall, showing how close we are to the season finale.

That’s when the BB22 jury will take the stage and select the summer 2020 winner.

Within those episodes, a lot will be shown that has already taken place inside the Big Brother house. We already know who won the final four HOH, who they nominated for eviction, and who won the final Power of Veto this season.

Though the season is winding down, we also received some great news in the fact that producers are already casting for Big Brother 23.