Bodyguard episode 3: Who's behind the bombing and 9 more HUGE questions

After a stellar opener kicked off with that train sequence and the second episode featured an insanely tense assassination attempt on Julia Montague (Keeley Hawes), we felt sure that the BBC One thriller couldn’t up its game any further.

Not a bit of it. The third chapter closed with the British government devastated by another terror attack, with one major character left in the hospital and a whole host of suspects in our sights.

Here’s all the questions – and theories – we have right now. (No decryption needed to review this material.) 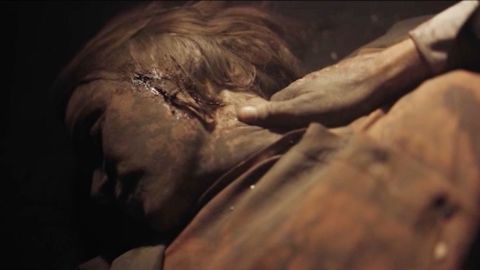 Budd takes her pulse in the aftermath of the RIPA ’18 bombing, but his reaction is hard to read… did the Home Secretary perish in the blast?

We don’t see Julia again after this and while the official line is that she’s merely badly injured and recovering in hospital, it’s possible this could be a cover-up. (We’re betting she’s alive, though – if anything, Montague will end up faking her death in an attempt to mislead the terrorists.)

2. Who’s behind the bombing? 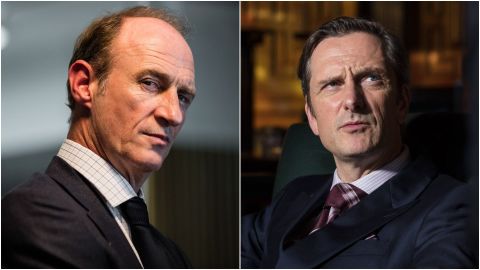 Like a Jed Mercurio take on Dallas‘s ‘Who Shot JR?’ (or EastEnders‘ ‘Who Shot Phil?’, depending on your age), the third episode of Bodyguard saw Julia antagonize pretty much every other major character, leaving us a list of suspects that’s essentially the show’s entire cast list.

Was MI5’s director-general Stephen Hunter-Dunn (Stuart Bowman) and his enigmatic accomplice Longcross (Michael Shaeffer) involved in the bombing? Despite their apparently cosy relationship, Hunter-Dunn was furious with Julia for visiting the PM behind his back. “Do you want A PLAN put in place?” asked Longcross, ominously.

“Julia’s snatching the key to No.10,” Penhaligon told Travis. “We need to do something… fast.”

Is Roger caught up in a plot to bump off his former spouse?

Of course, it was PR adviser Tahir Mahmood (Shubham Saraf) who apparently delivered the suitcase bomb that took out the RIPA ’18 conference. But is he really the guilty party? 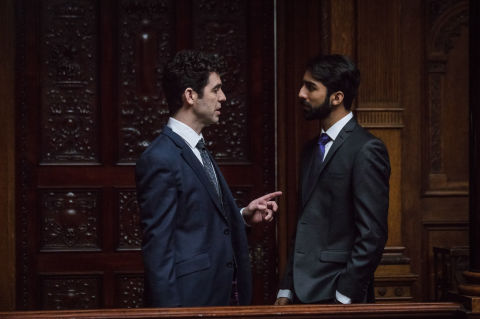 Julia’s snivelly special advisor Rob Macdonald (Paul Ready) has undermined PR adviser Tahir at every opportunity, but suddenly, moments before the Home Secretary’s team leaves for the RIPA ’18 conference, he decides to send Tahir in his place.

Rob hands Tahir a silver briefcase, apparently containing “background material” for Julia’s speech. Then later, he calls Tahir and warns that there’s been “a massive f**k up” and that he needs to deliver the “research files” to Montague on-stage, since they’re essential to her address.

What we assume happens next is that Tahir steps on-stage, the briefcase detonates and takes half the conference with it.

So was Tahir a stooge? Did Rob set him up by handing him a briefcase bomb? Again, there may be more to it…

4. Why didn’t we see inside the briefcase? 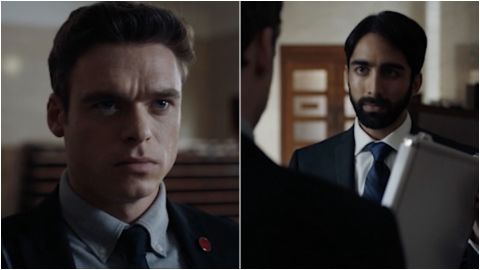 David Budd (Richard Madden) demands to see what’s inside of Tahir’s briefcase before he allows him onto the stage. The briefcase is opened and David sees inside… but we, the audience, do not.

Was this just a directorial choice, or an indication of something bigger? Did David, for whatever reason, see an explosive device inside the case and agree to let the bombing go ahead? (Surely not.) 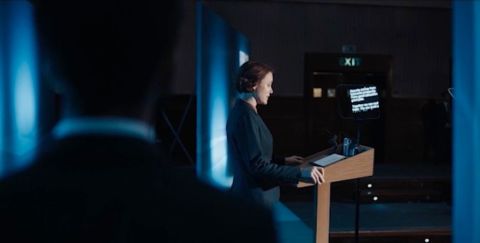 It seems suspicious, too, that we only see the figure we assume to be Tahir from behind, in shadow, in the seconds before the bombing. What was his state of mind at that moment? And can we even be 100% sure that it was Tahir up on that stage?

5. WTF is going on between David and Julia? 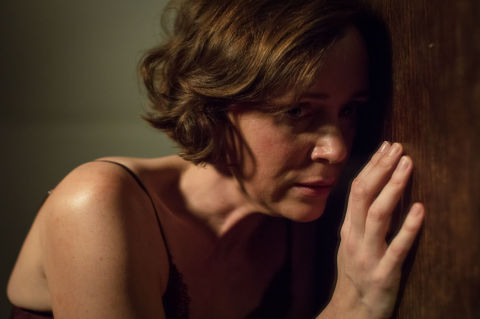 Halfway through the first series of Bodyguard and we still have absolutely no clue how David Budd and Julia Montague really feel about each other.

The previous episode saw David agree to spy on Julia for the police and while he does listen in to her conversations with Stephen Hunter-Dunn, he fails to disclose the full details of those chats with his police handlers.

Has David been utterly seduced by Julia, or does he have his own reasons for lying to the police? He seems genuinely upset by the prospect of losing his position as her minder. But then again, he doesn’t tell her what Anne Sampson (Gina McKee) and her ilk are up to. Maybe he’s playing both sides? 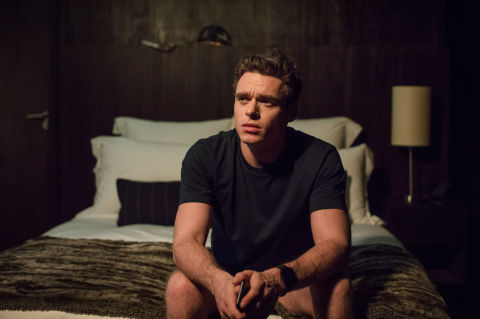 It’s possible that Budd doesn’t even know exactly what he’ll do from one moment to the next. He’s clearly not in a well frame of mind – not only does he attack Julia after being stirred suddenly from his sleep, but he also appears to lose concentration and ‘space out’ while driving her to the RIPA ’18 conference.

As for Julia, writer Mercurio has hinted that there might be a “manipulative” angle to Julia’s actions, that “maybe it’s in her interest” to have seduced Budd. Montague might insist that her feelings are genuine, and deep, even suggesting that David step away from his role as her protector so that they can take their relationship public. But is she just using sex as a weapon? 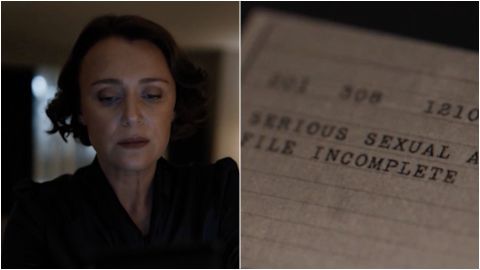 Longcross delivers Julia a tablet containing sensitive material – we don’t see it in full, but from the brief glimpses we do get, it appears to be a folder containing dirt on a certain individual, with mention of alcohol and drug abuse and a “serious sexual assault”.

Having reviewed the material, Julia says it’s “her duty as a public servant to take action” and shortly afterward pays a surprise visit to the Prime Minister, with Penhaligon asserting that she’s “snatching the key to No.10”.

Presumably, then, MI5 has handed Julia the necessary materials to oust the PM? But will we ever discover the full extent of what was on the tablet? Budd got a glimpse and didn’t look at all happy with what he’d seen. 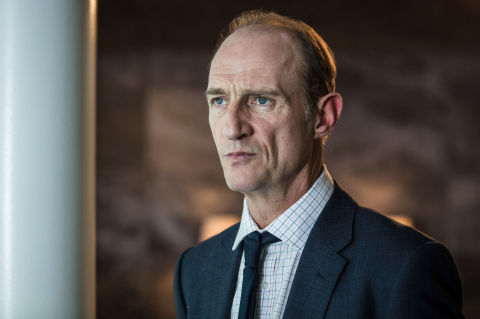 During her meeting with Stephen Hunter-Dunn, Julia makes reference to her “arrangement” with MI5 and how it needs to remain a secret. “No-one knows,” promises the top spook.

What exactly is the deal between Montague and Hunter-Dunn? Is it as simple as securing her place as Prime Minister, in which position she’ll give increased powers to the security services? Or is there more to their partnership?

8. Who is Richard Longcross? 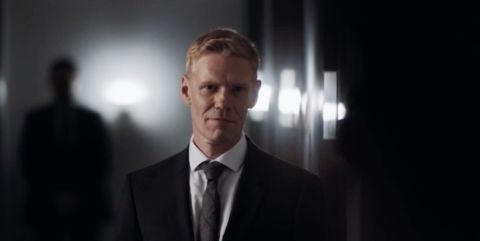 There’s no record of Julia’s sinister visitor in the police archives… is Richard Longcross (if that is his real name) just another MI5 heavy or does he have another stake in all this?

9. Will David’s link to Andy be exposed? 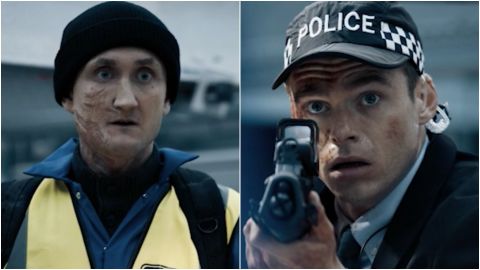 Though they’re still unable to identify Andy – David’s old army pal who took a shot at Julia – the authorities are closing in. They suspect he might be “ex-forces”, have pulled together an E-fit image good enough that it sends Budd into a panic, and have intel that Andy (who they know by the alias “Adrian Smith”) might have had “at least one accomplice”.

Will SO15 be able to make the connection between David and Andy, potentially placing Budd in their crosshairs?

While we’re on the topic, why is it taking so long to identify the corpse of a former serving soldier, one with rather distinctive injuries? Even assuming he didn’t submit a DNA sample (servicemen often do this to aid in potential identification following combat fatalities), did Andy’s family not submit a missing persons report? 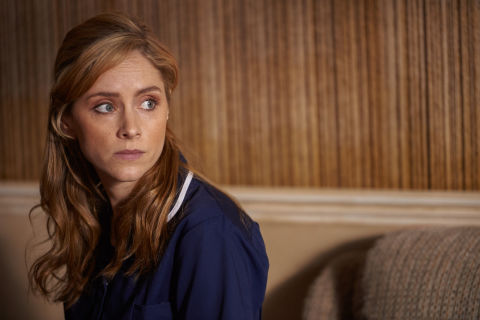 David is becoming increasingly isolated from his family, with wife Vicky (Sophie Rundle) ducking his calls. She’s spending more and more time with her new boyfriend, who we’re yet to meet.

Is Vicky’s man a government spy? A terrorist? Or has this show just made us paranoid? Anything’s possible – though the last option is most probable!

Bodyguard continues next Sunday at 9pm on BBC One. 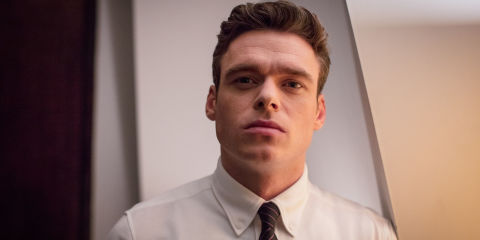 Related ArticleBodyguard writer has no firm plans for series 2 yet