BoJack Horseman is holding himself accountable, and so is “BoJack Horseman.” By the end of another remarkable season, the eponymous horse on two feet walks himself into a rehabilitation facility with the help of his friend, Diane (voiced by Alison Brie). BoJack (Will Arnett) spends Season 5 trying to get better, but his best efforts are undermined by unavoidable circumstances (his mom dies) and past mistakes (nearly sleeping with a teenage girl). Near the end of the new episodes, he snaps and chokes his female co-star, Gina (Stephanie Beatriz). So he’s lucky to have a friend remaining who can usher him toward getting help.

In a way, Raphael Bob-Waksberg’s series didn’t have such a friend. Of course, it never committed any narrative sin as heinous as what BoJack has done, but it only received encouragement despite traversing rocky terrain. The Netflix original has been critically hailed in each of its five seasons. Aside from freshman year, which was sabotaged by critics (like this one) who didn’t know what to make of the first six episodes, the dark comedy has earned enough raves to justify shifting to autopilot; to keep following its drunk, narcissistic antihero without second-guessing what, exactly, viewers were taking away from his increasingly distressing adventures.

“BoJack” Season 5 is built around personal accountability. As meta and insightful as ever, Netflix’s best series mirrors the growth of its star by accepting controversial associations and taking measures to make sure it doesn’t become the very thing it satirizes. This year, that “thing” is explicitly “Philbert,” BoJack’s new detective drama that’s so dark it uses “darkness as a metaphor for darkness.” But it’s also issues of representation and normalization brought on by comparing “BoJack” to series made about (or by) problematic men. It may be clear to some what separates “BoJack,” “Mad Men,” and “Breaking Bad” from series about bad men doing bad things for the sake of looking cool, sounding cool, or otherwise appealing to audiences for the wrong reasons, but Season 5 reinforces those barriers until they’re basically impenetrable.

So it’s befitting that to kick off a season of accepting past errors, Bob-Waksberg gave an honest interview to Slate’s Inkoo Kang on the series’ “original sin”: casting a white actress to play an Asian-American character. The controversy surrounding Diane has been circulating for some time, but the creator first addressed the issue head-on in 2018, both on Twitter and in interviews. Given the journey Diane takes to Vietnam in Season 5, “BoJack” is prepared to address representation issues like it hasn’t in the past — certainly dozens of articles will address how well the episode works from perspectives more valuable than mine — but there’s decisive action taken beyond her character throughout the new season. 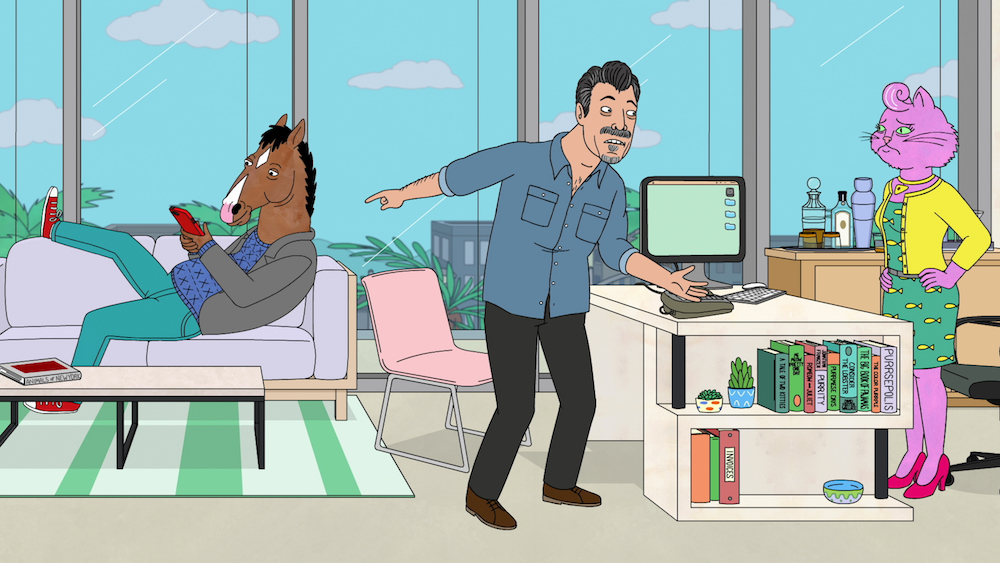 In the opening episode, BoJack starts to notice similarities between himself and his character. “I don’t like Philbert,” BoJack says. “He’s a drunk, he’s an asshole. I don’t want to be him.” Of course, he has to be — it’s his job — but the show doesn’t. “BoJack Horseman” doesn’t have to be “Philbert,” and even when the characters begin to reflect each other’s worst vices, “BoJack” draws clear lines between what it’s doing and what “Philbert” becomes. At one point, Diane even draws a chart for BoJack to outline the dangers of normalizing bad behavior.

In fact, every time “BoJack” holds up that mirror and acknowledges the comparisons, it further distances itself from the problem. When Diane draws the chart, she’s trying to illustrate why Vance Wagonner (Bobby Cannavale) — a character who starts as a Mel Gibson stand-in but ends up representing so many more bad men — shouldn’t be allowed back into Hollywoo’s good graces. But when Vance isn’t cast in the show, it quickly becomes clear that the problematic person is BoJack himself. Diane hears the tape recording of BoJack discussing how he almost slept with a teenage girl (which dates all the way back to the end of Season 2), and as she starts to wrestle with who BoJack really is, the audience is reminded of his many serious slip-ups.

Meanwhile, BoJack’s quest for self-improvement repeatedly hits road blocks. His job won’t let him get any distance from his dark side. He’s attracted to a co-worker who doesn’t want to date him seriously (at least, at first). His mother dies. Hollyhock (Aparna Nancherla) forces him to confront his pill addiction by accidentally dumping them down the toilet, and, oh yeah, BoJack is addicted to painkillers. Painfully ironic and real, the very crutch BoJack leans on to help him through these hard times turns into his primary vice. Not only does it send him driving head-first into traffic (in order to have a legitimate excuse for more pain pills), but soon he’s so hopped up on drugs he can’t distinguish between role and reality.

It’s then that BoJack snaps. In a blackout from overdoing his meds, he can’t stop himself from choking Gina even after the director yells cut — BoJack and Philbert have blended into one maniacal criminal. And as so often happens for rich and famous men, he’s let off the hook. Gina won’t press charges (and even defends him on camera) because she doesn’t want to be defined by his story. She’s finally being recognized for her acting, and she knows if she goes after her assaulter, she’ll always be known for that instead of her work. Another woman’s career would be lost because of a man’s violence. 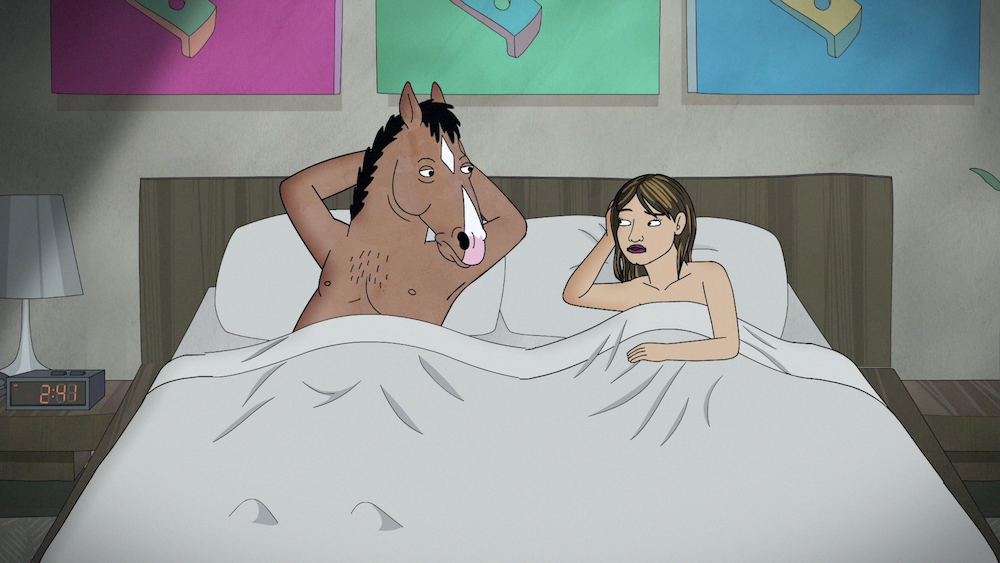 It takes seeing all that for “BoJack” Season 5 to really hit home, just like it takes Diane actually watching “Philbert” to understand why it’s so harmful. “I made him more vulnerable, and that made him more likable, which makes for a better TV show, but if ‘Philbert’ just makes it easier for dumb assholes to rationalize their behavior we can’t put it out there,” she says. It’s exactly why “BoJack” tells this story: to exemplify the dangers of normalizing bad behavior by openly engaging with the issue head-on. “BoJack” doesn’t normalize such behavior. If anything, it goes out of its way to show the drastic consequences of BoJack’s actions. But it can still be very, very funny, and people who watch just for laughs may skirt over some of its more salient points about responsibility. By letting BoJack off the hook with Gina, the show (again) forces its character to take responsibility for his actions.

Again, Diane gives a speech, and again, she’s right on the mark. “No one is going to hold you accountable,” she tells BoJack outside the rehab center. “You need to take responsibility for yourself.” The series has done exactly that already — you could say Season 5 has been in rehab all along, but let’s not. It’s been self-evaluating in a way few people were demanding, yet none should be surprised to see. Bob-Waksberg’s comedy is constantly, persistently, and keenly in tune with its own identity, just as BoJack struggles to be. He’s been obsessed with being loved, then being seen as good, then being good, and only now is he starting to realize “there’s no such thing as ‘bad guys’ and ‘good guys,’” as Diane says. “You’re never going to be ‘good’ because you’re not ‘bad.’”

The speech actually drew to mind another moment from Season 2 — its motto, if you will. “Every day, it gets a little easier,” the bearded monkey jogger tells BoJack. “But you gotta do it every day — that’s the hard part.” The most BoJack can hope for is trying to be a better person; an honest effort toward self-improvement is all anyone can really ask of anyone else. It’s what we so often don’t see from famous men who keep repeating the same mistakes, or refuse to acknowledge mistakes when seeking forgiveness. BoJack is on the right path now, and yes, he’s been there before. But seeing the effort makes all the difference in being able to identify with his journey and empathize with his struggle.

Before he checks into rehab, it’s hard to separate BoJack and everything he’s done wrong with someone like Vance Wagonner. But it’s not hard to see the difference between “BoJack” and “Philbert.” It’s done the work to get better, even when it was already great.