‘Can You Ever Forgive Me?’ Director Marielle Heller on What Gets Lost When Movies Strive For Clarity

There’s a scene in Marielle Heller’s new film “Can You Ever Forgive Me?” during which Lee Israel (Melissa McCarthy) is having a dinner with Anna (Dolly Wells), a bookstore owner who buys Lee’s forged letters that are, to Anna’s knowledge, written by famous literary figures. The dinner could be interpreted as a date – the two women have become friendly and it seems as if they like each other.

“I remember getting the note from somebody, ‘Is it clear that they are asking each other out on a date?,’” said Heller when she was guest on IndieWire’s Filmmaker Toolkit Podcast. “And I was like, ‘No, it’s not clear, and nor should it be clear because that’s what it feels like to be a gay woman in 1991 and not being somebody that wears their sexual orientation on their sleeve – this sort of slightly dancing around the issue.’”

Subscribe via Apple Podcasts to the Filmmaker Toolkit Podcast

It’s an incredible scene that reveals so much about Lee’s character. As Anna tries to pivot the conversation to being more personal, sharing intimate details about her own life, McCarthy gives a very guarded performance as Lee backs away, sabotaging any hope that this meeting this could be interpreted as a date.

“Lee is somebody who moves through the world in much more protected, not closeted, but she’s very private, and so her interactions with her potential love are therefore shrouded in these layers of mystery where they are trying to read between the lines,” said Heller. “So much of what is being said is about what they are not saying, and I found that beautiful and exciting.”

One of the things Heller found particularly exciting was that, while rehearsing the scene, both actresses and herself had a slightly different interpretations of why Lee was behaving this way. Not only did Heller see each interpretation as being valid based on what she and McCarthy had already established about the character, but there was also a joy in the audience going through that very same thought process.

“I don’t know why the note is always, ‘Is this clear?’ Why is that the best thing?,” said Heller. “There’s something really getting lost in our desire to overly clarify every detail of a script and make sure every person in the last row could understand every single thing that is happening the moment it happens and no one has to go home and think about it at all. That’s just unfortunate, because some of the joys of storytelling are doling information slowly and letting the audience catch up and letting people figure things out and question things.” 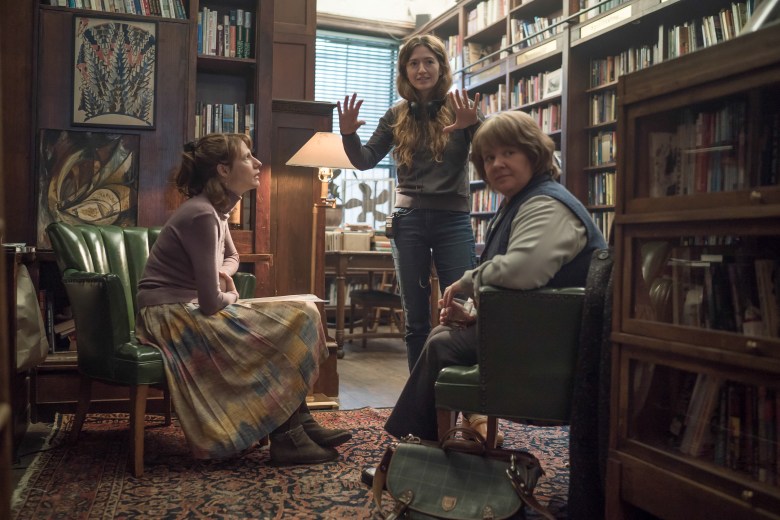 Marielle Heller directs Dolly Wells and Melissa McCarthy in “Can You Ever Forgive Me?”

While on the podcast, Heller also talked about capturing what it felt like being a struggling artist in early ‘90s New York City, why she built up the Jack (Richard E. Grant) role and his friendship with Israel, her process of working with actors and cinematographer Brandon Trost, and what drew her to directing a new movie starring Tom Hanks as Mr. Rogers.

The music used in this podcast is from the “Marina Abramovic: The Artist is Present” score, courtesy of composer Nathan Halpern.