Dan Walker and Louise Minchin handed over to Carol Kirkwood for a weather update this morning but as the BBC Breakfast star wrapped up her report, she admitted she had made a huge blunder. During her report, Carol got a little confused over the location of English counties and announced she was heading off to brush up on some knowledge.

Discussing Friday’s weather, Carol remarked: “Somewhere in central, southern England, around west London for example Hampshire, Bedfordshire, through parts of Buckinghamshire, places like that could see as much as 23, 24, even 25 degrees.”

At the end of her report, Carol realised her mistake and said: “I’m off to learn my counties now back to you both.”

“Carol, you don’t need to,” Louise said before the weather reporter explained her mistake.

“Oh my goodness,” Carol replied. “When you say something like ‘west of London’ and then you say ‘Bedfordshire’ you think, ‘Oops’.” 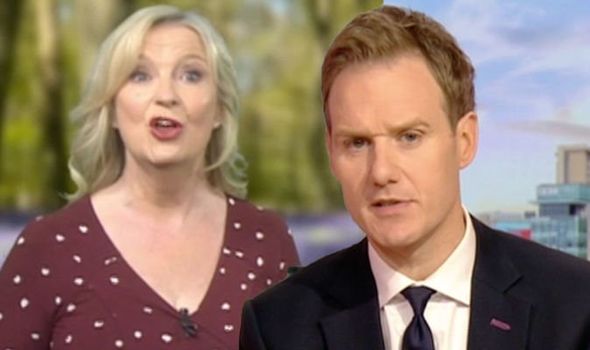 “People will forgive you anything, Carol. Don’t you worry about that and if they don’t, I’ll have them,” Dan added.