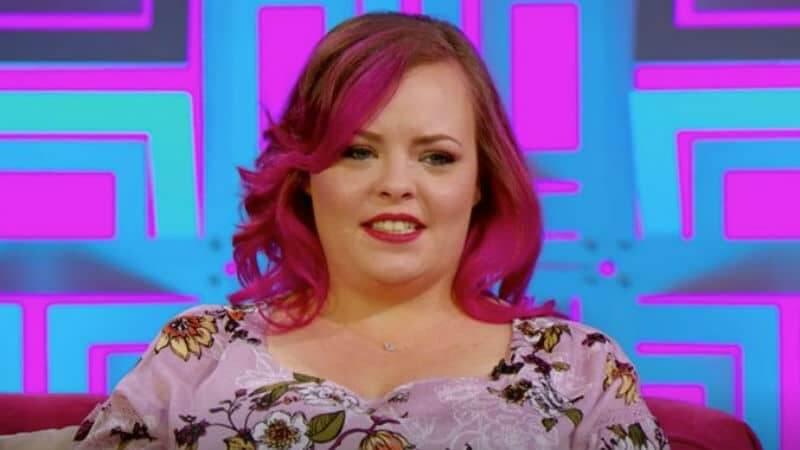 Catelyn Lowell and Tyler Baltierra have been through a lot together. The last year alone was filled with plenty of ups and downs, including nearly back to back trips to rehab for the Teen Mom OG star.

A few weeks ago, Catelynn Lowell teased fans with news that she was going to share. It was on a black canvas with rainbow letters. Immediately speculation swirled that she was expecting again. The couple seemingly disappeared from the spotlight after that.

Earlier today, Catelynn Lowell confirmed she is expecting her third child with husband, Tyler Baltierra. The two share a daughter they put up for adoption when they were just teenagers and another little girl, Novalee who they are raising together.

The couple has talked about wanting more children a lot. Last fall, Catelynn Lowell revealed she was pregnant to her husband with a shirt she bought for Novalee to wear. At this point, Teen Mom OG was filming and everything was caught on camera.

Just a few days later, Catelynn Lowell discovered she was having a miscarriage. The event took a toll on her physically and emotionally. Teen Mom OG fans watched as she struggled with suicidal thoughts and took back to back trips to rehab while filming was happening.

Details surrounding Catelynn Lowell’s current pregnancy are scarce. She confirmed the couple is expecting but there has been no due date revealed.

Though in the photo she shared there is a noticeable baby bump. According to The Ashley, Catelynn and Tyler Baltierra already know they are expecting another little girl.

so excited to finally reveal our big news #LinkInBio”

Teen Mom OG will return to MTV in just a few weeks and it is likely that Catelynn Lowell and Tyler Baltierra will share more details regarding the baby they are expecting. Many fans are assuming that Lowell is in her second trimester already because the gender has been leaked and also because the typical time frame for risk of a miscarriage has passed.

Of course, there are some people reacting negatively about the news Catelynn Lowell shared after everything she went through almost a year ago. Despite the battle and the pain that she endured, the Teen Mom OG star is ready to welcome another addition into the family.