On November 1, the 2018 IndieWire Honors ceremony will celebrate eight filmmakers and actors for their achievement in creative independence. We’re showcasing their work with new interviews this week.

While Charlize Theron was finishing up her first week of playing Fox anchor Megyn Kelly on Jay Roach’s untitled Roger Aisles film, Kelly was abruptly fired from NBC. “It was a rough day yesterday,” Theron said in an interview. “I’m trying to close everything off and stay in my safe quarters just trying to do this film. I’m watching a ton of real footage, to get her cadence and adapt my behavior. I’m sticking with my homework.”

Playing complicated, powerful women with vulnerable undersides is nothing new to Theron, who threw out a primal scream as one-armed Imperator Furiosa in George Miller’s “Mad Max: Fury Road” that moviegoers will never forget. The statuesque South African movie star has proved to be a fearless actress-producer. She’s capable of taking on roles ranging from real-life serial killer Aileen Wuornos (her 2004 Oscar-winning role in “Monster”) to depressed mother-of-three Marlo Moreau in “Tully” (2018, Focus Features), her second collaboration with screenwriter Diablo Cody and director Jason Reitman. 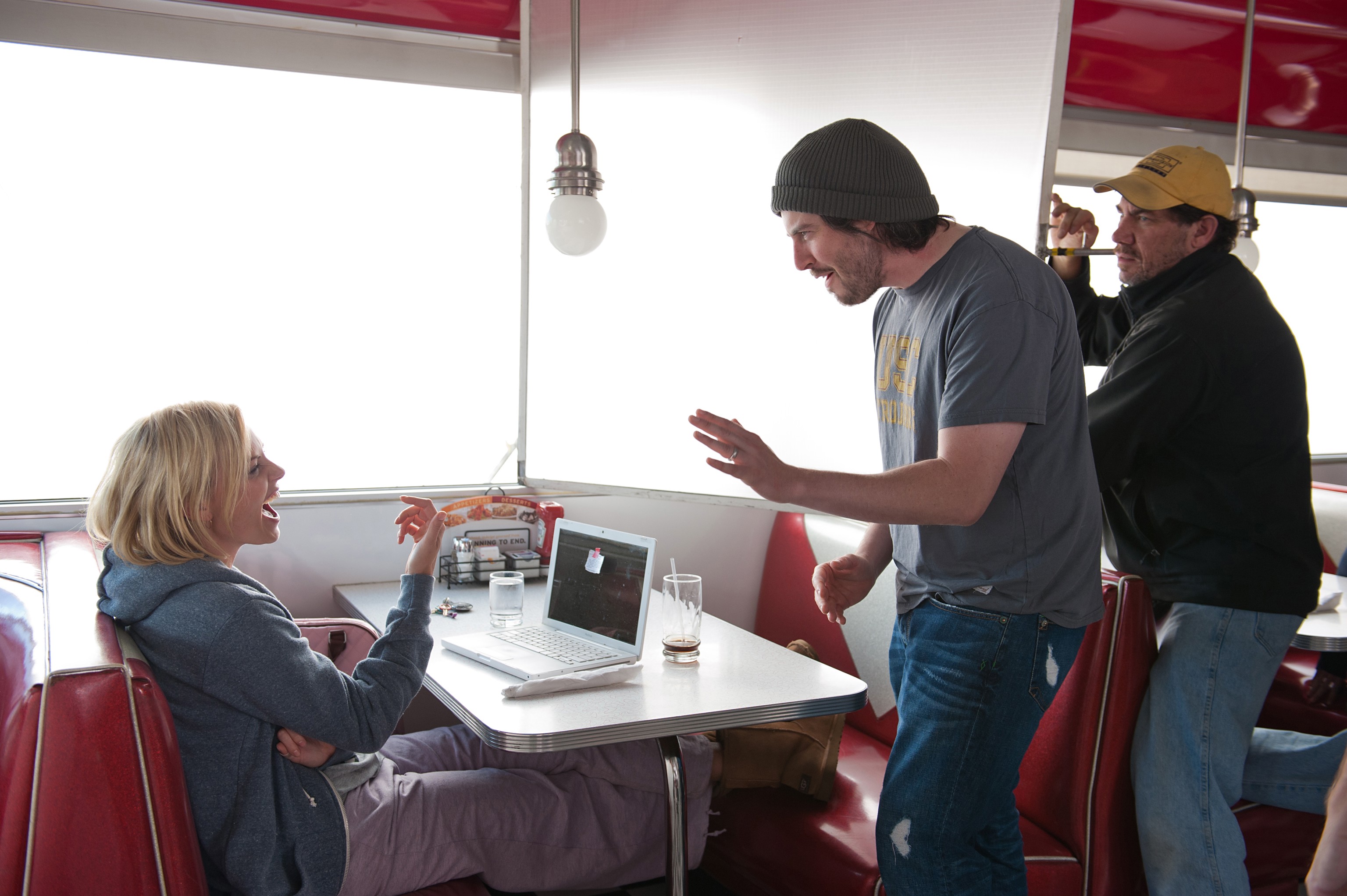 The iconic scream in “Fury Road” wasn’t originally in the storyboards, but came out of a conversation with Miller about “the agony of losing everything and what that looks like and feels like.” Working in the brutal desert of Namibia,  Miller shot the entire scene with a skeleton crew of eight people, in a couple of takes. After six months of filming, Theron was ready to let it rip.  “I was very tired, and I might not have had the greatest experience with my costar,” she said.

Reminded that she was talking about Tom Hardy, she smiled. “So…bring in the childhood stuff and it just happens!” she said.

Will she go back to Imperator Furiosa and “Mad Max?” “The door is open here on my side,” she said. “It is up to George Miller. There’s unresolved stuff between him and Warner Bros.” Miller’s production company is currently suing Warner Bros. for unpaid earnings, and he recently announced plans for a new project, “Three Thousand Years of Longing,” a romance. “That tells us he needs a break from it all,” Theron said. “I would do anything with him, and hold him in highest regard.” 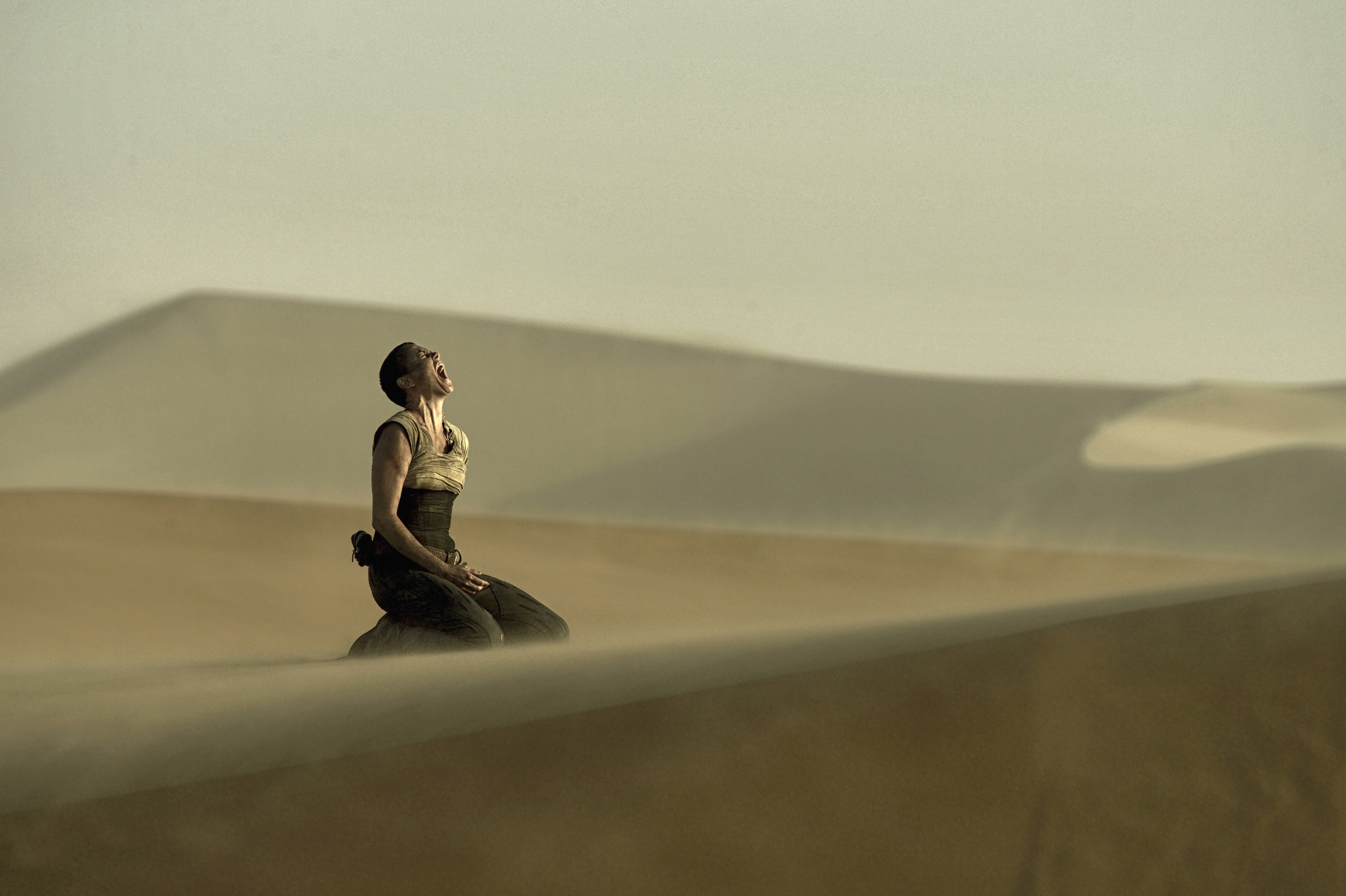 Theron’s first language was Afrikaans; she had to brush up her English when she moved to New York at 19 to study at the Joffrey Ballet. Before that, she modeled in Milan in order to escape from her hardscrabble country upbringing outside Johannesburg. (Famously, her mother shot and killed her abusive, alcoholic father in self-defense when she was 16.)

One way that Theron survived and thrived in an unforgiving business: early in this century, she founded Denver & Delilah, a production company named after two adopted dogs. “I had no reason to stay here after I left South Africa with a suitcase held together with bobby pins,” she said. “I’d rent rooms, find a bed somewhere. I was not settled. …I ended up staying, I got a film, my first acting job. It was almost as if the dogs knew I was going to stay here for a while. I named the company after the two of them, as the first representation of stability.” 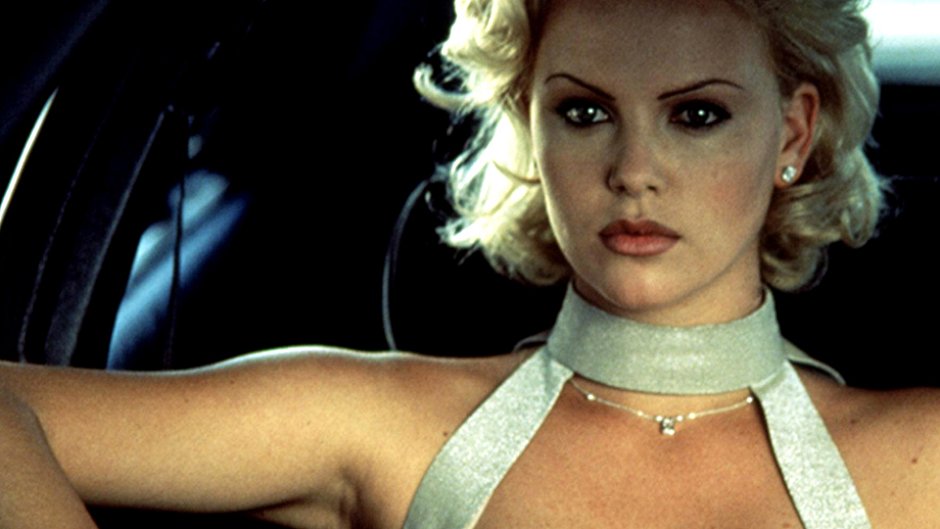 “Two Days in the Valley”

Curiosity drove Theron from the start. “From the first set I’ve ever been on, I want to know what everyone is doing, which is unusual,” she said. “Actors go to their trailers. But I stay on set, fascinated by the guy who puts tape on the floor. ‘How do you do all this?’ Back then actors didn’t produce. They were considered vanity deals.” But a handful of producers showed Theron the ropes. “I watch movies,” she said, “and when something raises the bar, I ask, ‘how can I do that, take a story and inspire people in the same way?”

The last movie that tore off her head was Ryan Coogler’s “Black Panther,” “a big film that people embraced,” she said. “And I’m going home to my own African-American daughters.” (Her kids are now two and six.) Elsie Fisher’s performance in “Eighth Grade” also blew her away. “When you watch actresses that young, it felt authentic,” she said. “I was moved by her.”

The actress has produced some 16 projects since “Monster,” including Netflix series “Mindhunter,” which she brought to David Fincher, figuring the director of “Zodiac” might be as obsessed with serial killers as she was. “We’re getting ready for Season Two,” she told the crowd at a recent San Francisco Film festival tribute. “Dream big, motherfuckers!” Among the other movies Theron produced are  “East of Havana” (2006), “Sleepwalking” (2007) and Cody and Reitman’s “Young Adult” (2011). 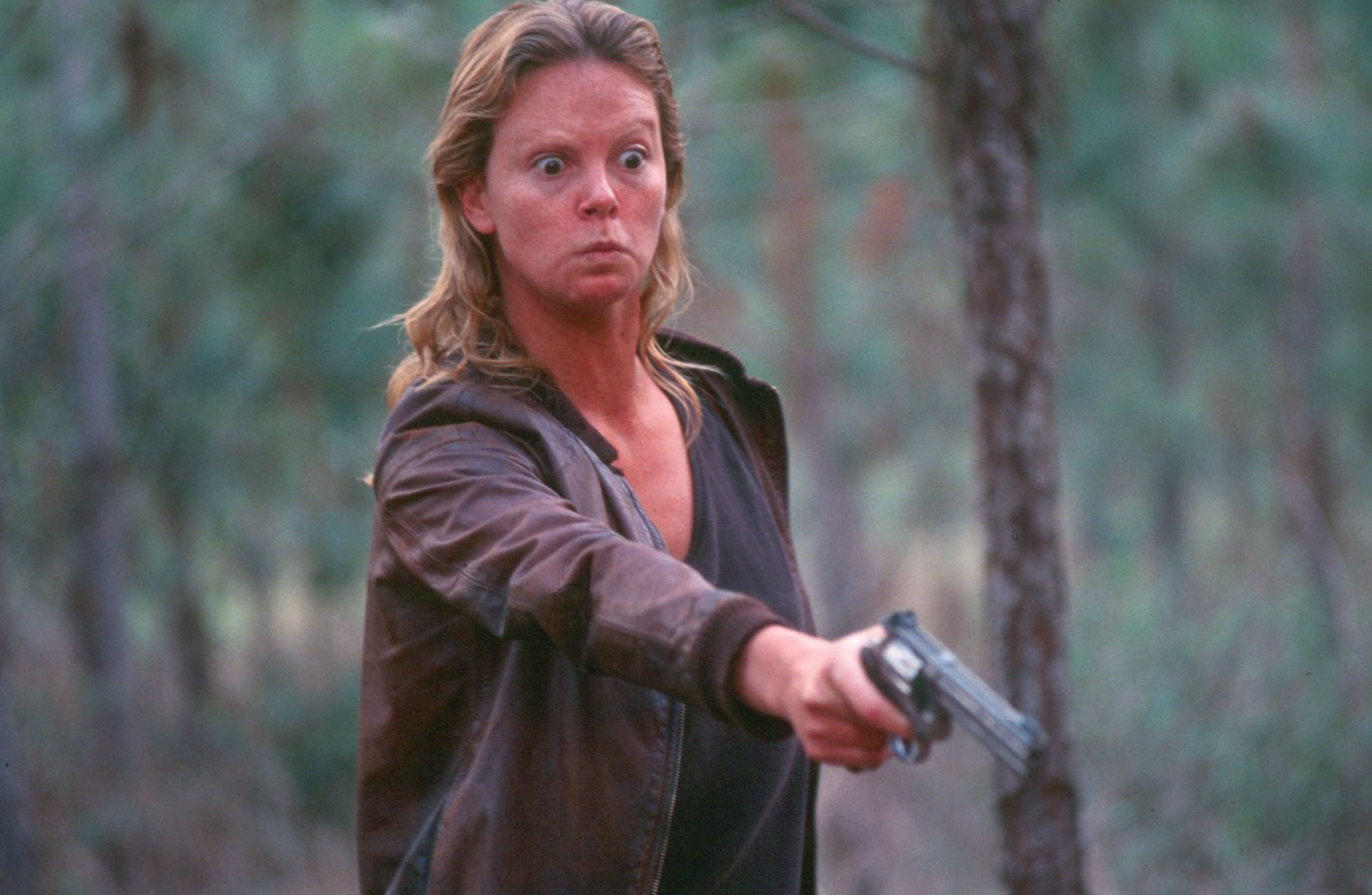 “I’m proud of even the ones that turned out not so good, that nobody saw,” she said. “We worked together as a team. We’d do some crappy work and end up shooting six weeks in crowded places with no preproduction and a first-time filmmaker. If we didn’t have those first go-rounds, then we wouldn’t have been able to do something like ‘Atomic Blonde,’ adapted from eight pages of an unpublished graphic novel. That I’m proud of!”

Early dance training boosted Theron’s athletic prowess and muscle memory. Her mother put her in a ballet class at four; she was a natural performer. She used that strength on “Fury Road,” and even more so on martial-arts actioner “Atomic Blonde.” She has never been afraid of her dark side and describes a recent spate of femme villains as her “bitch period,” including Furiosa, the evil queen in “Snow White and the Huntsman,” and the tough powerhouse women in Ridley Scott’s “Prometheus” and F. Gary Gray’s global blockbuster “Fate of the Furious.”

Theron took another turn after reading Cody’s script for “Tully” when her second adopted baby was six or seven months old. She related strongly to the gut-punch drama about motherhood, sleep deprivation and postpartum depression. “But it’s really about a woman having to find herself and make peace with ending one chapter of her life to make room for the next chapter,” she said. “It feels like a continuation of ‘Young Adult.’ A lot of it is not pretty.” 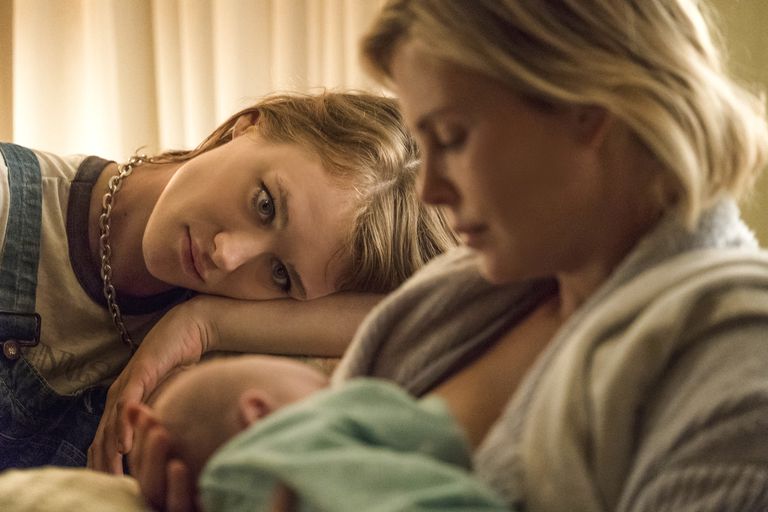 After getting into the best shape of her life for “Atomic Blonde,” Theron gained 50 pounds in three months for “Tully.” To represent the new mom low on time, money, or energy, Theron didn’t want to use prosthetics; she binged on cheeseburgers and sugar. “I couldn’t sleep,” she said. “I’m not a method actor, and all of sudden I became one.”

Sometimes Theron stars in her productions and sometimes she doesn’t. In the end due to scheduling, Rosamond Pike took on war correspondent Marie Colvin in Matt Heinemann’s “A Private War” (November 16), which was in development for 10 years. “I can’t imagine anyone else playing that role,” Theron said.

Next up: “Atomic Blonde 2” and Season Two of Netflix series “Mindhunter,” as well as more television. In this #TimesUp era, Denver & Delilah is “super-aware of who we hire,” said Theron. “I still hear stories that women are not getting paid equal to men on shows where it doesn’t make any sense. Like what happened with me and the Universal sequel to ‘The Huntsman,’ you have to ask sometimes. The studio said ‘yes’ and it was done with. But there are a lot of women who can’t ask. A lot of my friends don’t have that luxury.” 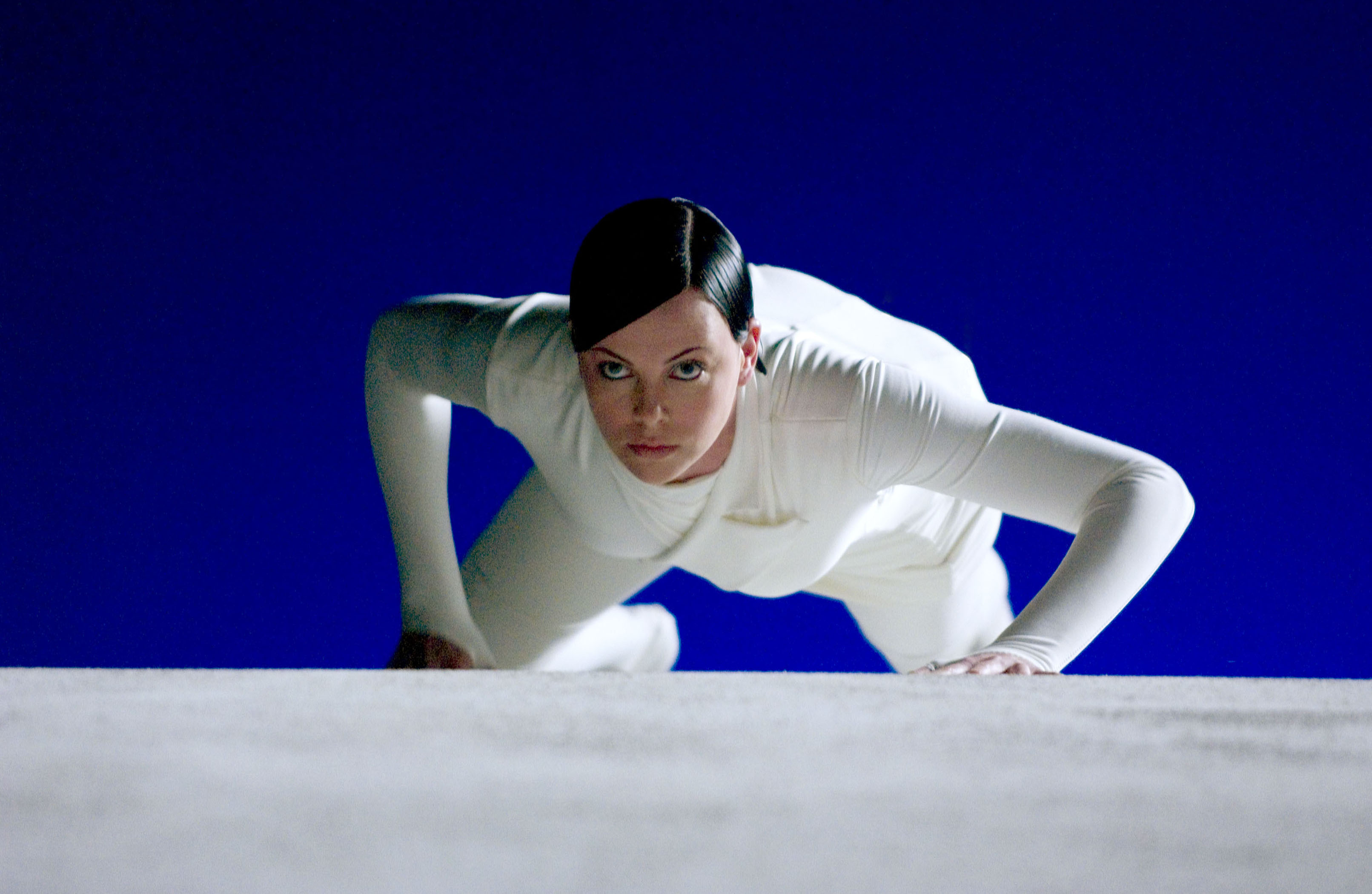 Also in the works is Theron’s production of Park Chan-wook’s 2005 “Sympathy for Lady Vengeance.” “We just got a draft in,” she said. “We have a director, we’re doing a notes session right now, and we’re hoping to shoot this next year.” Park approached her to play this signature role in a western remake. “It’s complicated and layered and it’s not easy to translate to our western civilization,” she said. And she’s not sure whether the movie will wind up as a dark indie or an entertainment for a wider audience; they’re trying to figure that out.

Feminism informs many of Theron’s decisions. She stars opposite Seth Rogen as a man who chases his fantasy woman (Theron) in Jonathan Levine’s upcoming romantic comedy “Flarsky” (2019, Lionsgate) which she just saw for the first time. “It’s another challenging story,” she said. “It feels good to be part of the women’s movement and turn a romantic comedy on its head, as girls are not just going to be chasing guys anymore. It can be the other way around. It’s fun and romantic and beautiful.”

Theron likes to look for new ways to surprise audiences, “how to take a story and turn it on its head,” she said. “How to find a different angle and push boundaries so that something is not regurgitated and predictable, not something we’ve seen before. I love it when movies do that for me.”