Chicago P.D.'s LaRoyce Hawkins Teases a 'Divided' Unit for the Rest of Season 8

Chicago P.D.’s latest assignment could spark a rift in Intelligence as they take on a sensitive case that forces them to think about police reform on a deeper level.

This Wednesday’s episode (NBC, 10/9c), titled “The Right Thing,” is the penultimate one of Season 8 and finds Voight and the rest of the team investigating a ruthless crime ring which hits close to home. As they dig deeper and uncover new leads, they quickly learn that the situation is far more dangerous than they initially thought. It’s a big case that will occupy this week’s episode as well as the season finale, and it finds Deputy Superintendent Samantha Miller second-guessing her decisions.

“I think this episode is a pretty interesting example of the way reform challenges all of our integrities,” LaRoyce Hawkins, who plays Atwater, tells TVLine. “It challenges everybody’s character a little bit.”

Hawkins also notes that as we get towards the end of the season, “the team that we love may find themselves divided — some people on one side of progress, and other people on the other.” 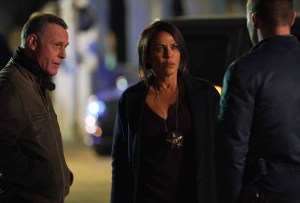 As the remaining two episodes of Season 8 deal with this serious ongoing case, friendships and working relationships will be tested. How that affects the bond between Atwater and Burgess (who started the series on patrol together) and Atwater and Ruzek (who call themselves brothers) remains to be seen. Regardless of what happens on the job, though, you can probably count on Atwater to be there for his closest friends when it comes to helping with Makayla.

As you’ll recall, Burgess declared Ruzek the custodial guardian in the event that anything ever happens to her. Hawkins says that while Atwater might not be a guardian on paper, he’ll still be on hand to support his besties with whatever they need.