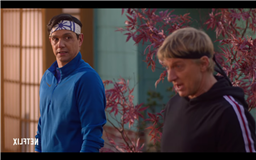 Netflix’s Cobra Kai Season 5 will be released on September 9, it was revealed in the action-packed teaser trailer above.

The video sees the story pick up after the events of the Season 4 finale where Tory Nichols (Peyton List) emerged as the champion of the All Valley Tournament earning a major win for her dojo, Cobra Kai. But she didn’t really win, a fact she was made aware of in the final beats of last season when she overhears Terry Silver (Thomas Ian Griffith) admitting to rigging the results.

It appears Tory has not revealed the deception in the teaser, as Cobra Kai has now become the dojo for teens to kick butt in the valley in full franchise mode shuttering Miyagi-Do Karate and Eagle Fang.

Silver is back and holding a prominent position of power at the dojo and will face resistance.

Following the epic partnership between the Karate Kid himself Daniel LaRusso (Ralph Macchio) and his nemesis Johnny Lawrence (Billy Zabka), Season 5 will see the return of Chozen (Yuji Okumoto).

Chozen replies, “Then I am gasoline.”

The teaser also reveals a reunion between Johnny and his son Robby Keene (Tanner Buchanan), who embark on a journey to Mexico in search of Miguel Diaz (Xolo Maridueña).

In true Johnny fashion, he doesn’t have a plan but hopefully, things will work out as they should regardless.

What is Miguel doing in Mexico anyways? He is shown briefly in the teaser having to defend himself with his karate skills against some grown men. Let’s hope his former sensei finds him in time.

Also worth noting is the appearance of Samantha LaRusso (Mary Mouser), who was defeated but continues working on mastering the art of karate.

Whether or not this leads to a full The Next Karate Kid style showdown is yet to be seen but as series co-creator Hayden Schlossberg told Deadline recently, “Anything is possible.”

That, of course, means that an appearance from Hilary Swank as Julie Pierce is also within the realm of possibility.

Watch the teaser in full above.