Colbert: 'The One Who Put Our President in Danger Is Donald Trump' (Video) 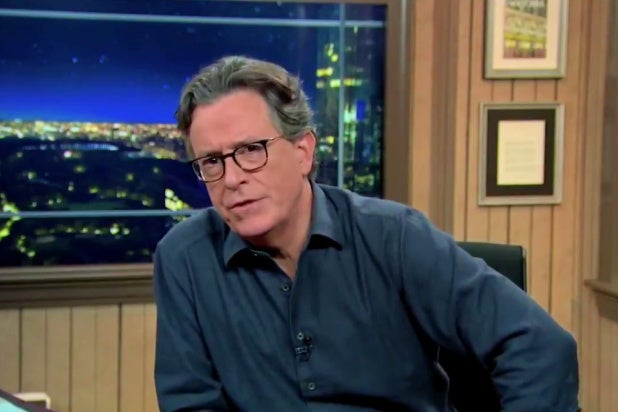 There was not supposed to be a new episode of “The Late Show With Stephen Colbert” Friday. But with the news breaking late Thursday night that Donald Trump had COVID-19, Colbert and his writing staff and crew assembled for an emergency episode.

And it opened with a monologue that was, for the most part, pretty serious.

“Now say what you will about the president, and I do, this is a serious moment for our nation. And we all wish the president and the First Lady of the United States a speedy and a full recovery,” Colbert said.

“I really think it’s important for all of us to separate the man from the office. And I hope on November 3rd, we literally do,” Colbert said. “But for now, I find it troubling, moving even, to see the president of the United States being taken to the hospital and to imagine the responsibility those service members flying that helicopter must feel.”

That said, Colbert certainly isn’t going to let Trump off the hook for getting himself into this situation.

“The commander in chief of the most powerful nation on earth has fallen ill with a virus that has hobbled the entire world. This after spending the last few months holding rallies, mocking people who wear masks and generally acting like he was invincible even though he’s a 74 year old man with pre-existing conditions,” Colbert said.

“And a lot of people are calling this in October surprise. I think it’s more like an October ‘well, yeah’. But it’s still disturbing. I’m worried for the president of the United States. Specifically, I’m worried why someone didn’t protect our president from this pandemic. It is important that our president not get sick, and it is upsetting but not surprising that the one who put our president in danger is Donald Trump.”

“Well wishes for the president poured out across the internet, including from his rival Joe Biden who tweeted, ‘Jill and I send our thoughts to President Trump and First Lady Melania Trump for a swift recovery. We will continue to pray for the health and safety of the President and his family.’” Colbert read.

“That’s a classy response. And let’s not forget: Biden needs Trump to get better. I mean, at the next debate Joe can’t interrupt himself.”

You can watch the opening of Friday’s “The Late Show With Stephen Colbert” in the embed above, or on Twitter.