Cord-Cutting Spiked During the Pandemic – Here's How High | Chart Cord-Cutting Spiked During the Pandemic – Here’s How High | Chart

In the time of the pandemic, the trend has become clear — cord-cutting is happening faster.

While widespread stay-at-home orders have catapulted the growth of streaming, the coronavirus pandemic has accelerated a parallel  trend: a sharp decline in subscriptions to the cable bundle.

Pay-TV providers are coming off their worst quarter ever, shedding more than 2 million subscribers in the first three months of 2020, or around 3% of the customer base.

That’s equal to roughly 40% of the total losses pay-TV providers suffered all of last year. As multiple analysts and studies have predicted, the economic impact from the global health crisis has hastened the decline of the pay-TV universe, a trend that was already keeping many cable and satellite executives up at night. This is despite the fact that people will actually watch more television on legacy platforms this year.

But cord-cutting isn’t exactly a new phenomenon: The industry has been losing subscribers for some time. According to MoffetNathanson data, pay-TV ended last year with a 7% year-over-year drop in the fourth quarter of 2019. In fact, the rate of year-over-year decline has increased in every quarter since Q1 of 2018. That means that each year’s losses compared to the same time frame from the year before are growing wider.

Below is an up-to-date look at how many subscribers have cut the cord now that first the quarter of 2020 is in the books: 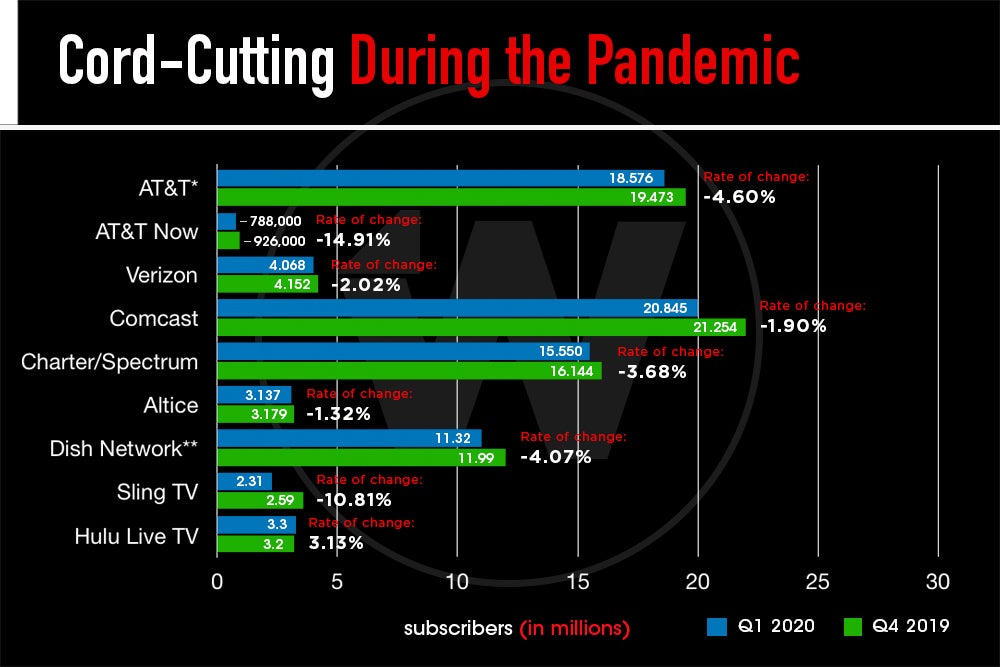 The coronavirus, which has put millions of Americans out of work and forced them to cut their budgets, hit the U.S. in March. That year-over-year decline in the first quarter was around 8%.

“Given the unfortunate rate of U.S. unemployment the rising cost of Pay TV, the current lack of live sports and much cheaper OTT alternatives, we expect that rate of cord-cutting to materially accelerate in the coming quarters,” MoffetNathanson analysts wrote in a late-April report.

Making matters worse, the streaming TV bundle that has been a small panacea for Dish Network went the other way this quarter. Sling TV lost subscribers this quarter, reversing the one growth area for Dish. For AT&T, it’s AT&T Now service continued its losses as well. Those losses mounted at the same time the top streaming services, including Netflix and Disney+, were adding subscribers by the millions.

Dish was hit particularly hard in the quarter, losing a record 413,000 paid subscribers. That doesn’t include the 250,000 business customers like bars and restaurants, which had to pause their service while their doors were closed. AT&T suffered the biggest losses in the quarter, losing more than 1 million customers between its legacy TV services like DirecTV and AT&T Now.

However, Bruce Leichtman, president of Leichtman Research Group, pointed to the reason the coronavirus had a negative impact on the pay-TV world: Fewer people were signing up for cable, in general, as opposed to those who just dropped their services.

Leichtman added that most of these companies are in the process of shifting their business model to emphasize broadband over video.

“Video isn’t the priority for most of these companies anymore,” he said. ” The cable companies are focused on broadband (and had the most net adds of any quarter in over a decade), video is to add value to broadband now.”

For a view of the parallel universe, here’s our chart on the growth of streaming: 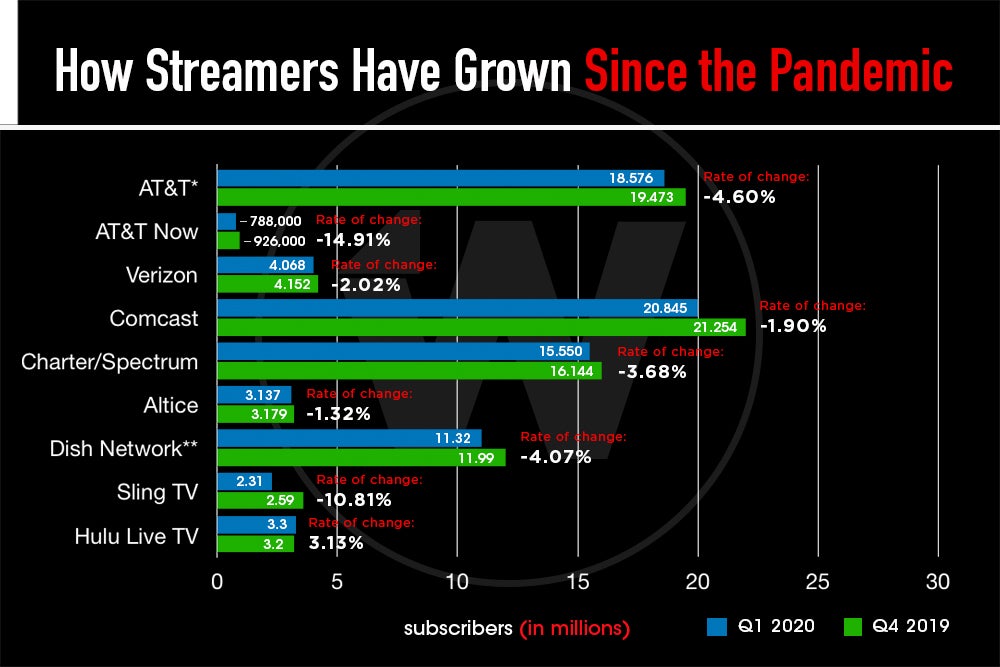