Coronation Street: Angie kisses Adam after she learns the truth about Jude

It’s taken some time, but Jude finally owned up about not being a marine biologist to Angie in Coronation Street tonight (May 2).

Jude planned to dupe his other half with an ingenious plan by Mary to have amateur actors pretend to be his co-workers at the marine biology… place (don’t ask us, we’re not marine biologists). It didn’t go well.

Upset by Jude’s revelation and his lies, Angie headed to her office where she poured her heart out to Adam over some drinks. Then, she leaned in for a kiss…

But to be fair to Adam, he pulled away, knowing she was just angry because she loves Jude so much.

Returning to Jude, Angie confessed what she had done and Jude, completely unaware of how much of an idiot he sounded, berated her for betraying their trust.

She reminded him he lied to her for two years, and it wasn’t his job that made her love him, but the person. Things ended on a decidedly frosty note. 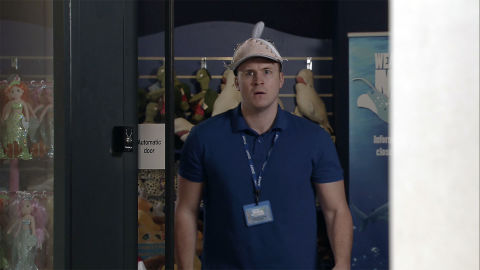 Meanwhile, Aidan heard that Toyah was there for the birth of their ‘surrogate’ daughter and began to suspect things aren’t as they seem…