Tyrone Dobbs has got an interesting time ahead of him, as Maureen Lipman is set to join the cast of Coronation Street as his grandmother.

It was confirmed today (August 3) that the popular actress will be joining the Corrie family as the “outspoken battleaxe” Evelyn Plummer.

Evelyn is set to make her entrance on the cobbles after Tyrone decides to research his family history following the recent shock death of his mum Jackie.

Getting more than he and Fiz Stape bargained for, Tyrone will soon be welcoming his grandmother into number 9 – and it sounds like Evelyn will waste no time in making herself comfortable. And a bit of a nuisance. 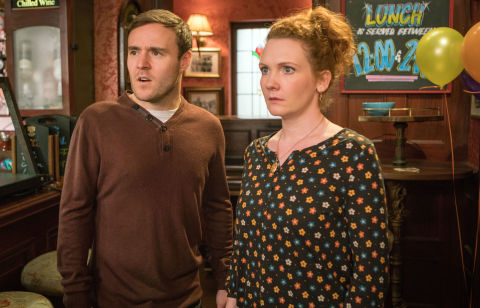 Corrie‘s producer Iain MacLeod said that he was “beyond thrilled” to be introducing the new character. “Evelyn is eye-wateringly withering and will add a fresh dollop of northern humour to the show as she turns Tyrone and Fiz’s lives upside down,” he teased.

Eagle-eyed fans may have already spotted as much, but Evelyn Plummer isn’t Maureen’s first role on Coronation Street, as the actress made a brief appearance as landlady Lillian Spencer in 2002.

Lipman has had an illustrious career, starring in the likes of Roman Polanski’s The Pianist, Educating Rita and Oklahoma. She has also trodden the boards in more than 25 West End productions and appeared on the small screen in the likes of Doctor Who, Casualty and Holby City, so fans are in for a right treat with Evelyn.

Maureen Lipman will make her first appearance on the cobbles this September.