Coronation Street: Kevin tells Sally he’ll ‘be there for her anytime’

Stars from the country’s most popular soap will be banned from the set for at least two weeks. Meanwhile it was revealed that production of Emmerdale was cancelled all this week following an outbreak of the virus on set. ITV said yesterday that “intensive cleaning” had been carried out on site in Leeds and filming is due to resume on Monday.

However, Corrie, filmed in Trafford, Greater Manchester, will be shut down for twice as long – despite no Covid-19 cases being reported among cast and crew.

The time will be used to change scripts to reflect the pandemic and to take stock of measures taken to protect the actors and other staff, a spokeswoman explained. She added: “We will pause filming from Monday for two weeks to undertake some rewriting of stories and scripts as a consequence of the coronavirus pandemic.

“We will also be taking the opportunity to review all health and safety requirements to ensure we continue to provide a safe working environment for the cast, crew and production team.

“This pause in filming won’t affect our ability to deliver six episodes of Coronation Street each week.”

An Emmerdale spokeswoman also said that its break from shooting would not affect ITV’s ability to broadcast six episodes each week. 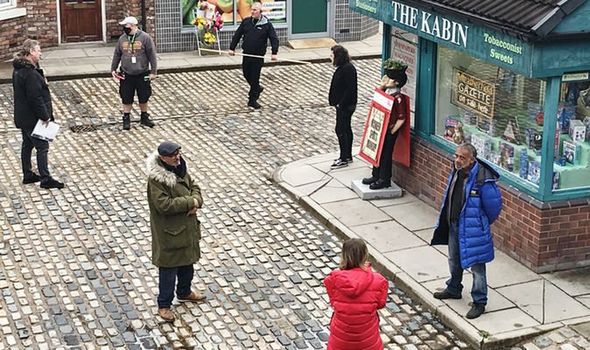 She said: “We paused filming on Emmerdale last week due to some members of the team testing positive for Covid 19.

“We’ve carried out proper track and trace measures on those cases and undertook intensive cleaning of the production building, whilst reinforcing the health and safety protocols we have in place.

“We’re returning to filming from this Monday.”

Shooting for both soaps first ground to a halt last March during the initial lockdown in England.

ITV bosses were forced to cut back on the number of episodes they broadcast each week to make what they had filmed in advance last as long as possible.

They managed to air three episodes a week until both soaps were able to safely get actors and crew back on set – albeit with the more elderly cast members absent.