The ITV soap will be continuing its annual tradition of airing a dramatic set of episodes to tie in with the Britain’s Got Talent live shows.

From Monday, May 28 to Friday, June 1, Coronation Street will air an episode at 9pm each evening – sandwiched in between the Britain’s Got Talent performance and results shows on ITV.

The explosive storylines include the return of Pat Phelan, Michelle Connor and Robert Preston’s wedding, a shock shooting, and David Platt finally deciding to speak out about his rape ordeal. 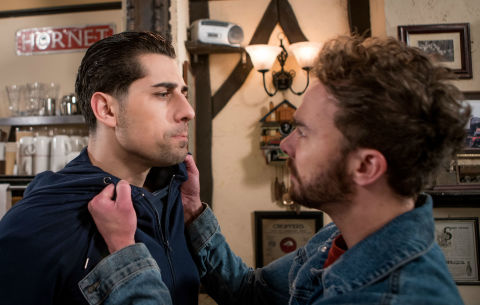 You can see the full set of short spoilers for the week below:

David finds the strength to face his demons. Ryan vanishes on the morning of Robert and Michelle’s wedding. Gary surprises Sarah with a souvenir from Wales.

Gary snaps when Phelan pushes him too far. Robert does a runner from his wedding. Shona stuns Alya with the truth about Josh.

Eileen finds Phelan on her doorstep armed with a gun. Michelle blames Steve for Robert’s departure. David finally opens up to his family.

Chaos reigns following a gunshot at Number 11. Phelan heads to the Bistro and takes a hostage. A desperate Gail reconnects with Rosemary.

Full spoilers and pictures for this week will appear on Digital Spy on Tuesday (May 22) at 7am.

Speaking to us, he revealed: “It’s a real compliment. So I’m delighted, of course, and I think everyone’s risen to these really exciting episodes to film. I hope everybody enjoys it and I’m sure they will.”

Digital Spy Soap Scoop video – hit play below for all the latest Coronation Street spoilers, as Phelan makes a shocking return and David hears his sentence.