Coronation Street low-life Geoff (played by Ian Bartholomew) reached a new earlier this week when he trapped his wife Yasmeen Nazir (Shelley King) in his magician’s box and left to go to the pub. But, during Friday night’s instalment of the ITV soap, it seems he is now going to take control of every little aspect of the Speed Daal chef’s life and viewers called his behaviour “heartbreaking” and “horrific”.

In recent weeks Geoff has tightened his grip on wife Yasmeen, with him managing to convince her to give him control of all her finances.

The extent of his control was obvious in a scene on Friday night, when Eileen Grimshaw (Sue Cleaver) asked Yasmeen to join her on a trip to Blackpool.

“We’re off to Blackpool on a girl’s trip. Rita’s scattering the ashes of her ex. We’re the support act. Come with us!” The cab drive controller hollered.

Uncertain and flustered at such spontaneity, Yasmeen turned to Geoff for approval. 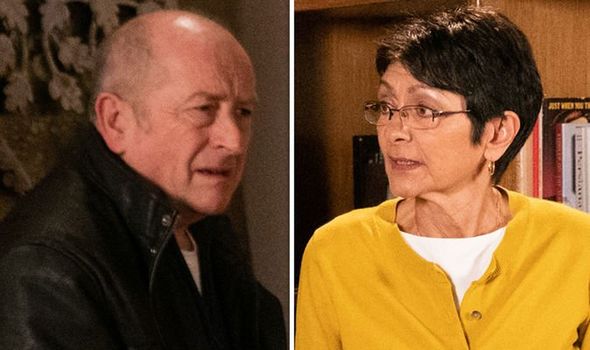 Eileen joked she didn’t need to ask Geoff, quite unaware of the controlling influence he has instilled over her.

Then, with a cruel irony, he yelled back: “Like she needs to ask my permission!”

Geoff patronised her, as if speaking to a child, handing her a five pound note: “If any one deserves a bit of fun, it’s you.”

His calculating behaviour and tight-fistedness infuriated viewers, who leapt to Yasmeen’s defence. 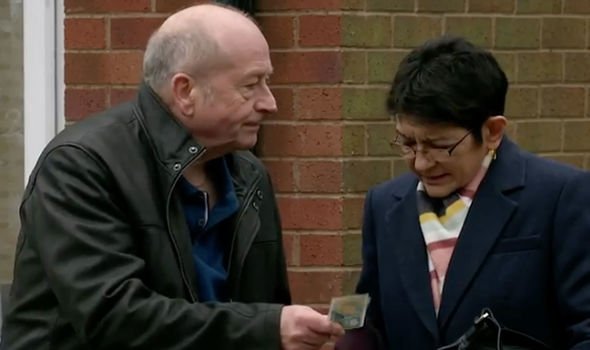 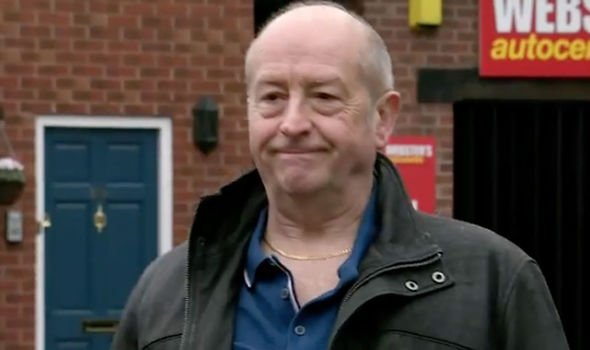 One tweeted: “The Geoff and Yasmeen storyline is so, so upsetting. I’m on tenterhooks, it’s so well-written, beautifully acted, absolutely horrific to watch, and so compelling one can’t look away.”

Another posted: “As if Geoff gave Yasmeen a FIVER for a day out in Blackpool. Would’ve taken his wallet and run and jumped on the bus.”

A third expressed concern for Yasmeen: “I’m worried for poor Yasmeen, Geoff will be furious that’s she’s been out and had a good time, he’ll make her pay – and don’t start me on the fiver he gave her!”

Another viewer had a suggestion for Geoff: “Shove your fiver Geoff you maggot.”

The development of Geoff’s coercive control over wife Yasmeen has built into a powerful storyline, with Geoff now taking control of what she spends and where she goes, what is going to happen next? Will he start deciding what she wears and who she sees?

It’s now been reported Alya Nazir (Sair Khan), granddaughter of Yasmeen, will start to dig into Geoff’s background to find evidence that will persuade Yasmeen to escape from his grip.

What Alya discovers is a past which has terrifying implications for Yasmeen’s future.

A source told The Sun Online how Alya’s suspicions are confirmed: “Alya has always known that there’s something dodgy about Geoff but she will really begin to pay attention soon.”

What she learns horrifies her: “Alya digs into his past and finds an old news report about an assault he committed on another woman and confronts her grandmother with it.”

But in an upsetting twist, the source disclosed Yasmeen won’t be convinced by her granddaughter’s discovery.

“She desperately tries to make her see sense, but it looks like Geoff’s got too strong of a hold on Yasmeen by that point,” said the source.

“He worms his way out of it and the storylines are going to run and run, but Alya has him in her sights and will do whatever it takes to save her grandmother.”

If you have been affected by Yasmeen’s storyline, you can find help at womensaid.org.uk or call 0808 2000 247 for the freephone 24 hr National Domestic Violence Helpline.

Coronation Street continues on ITV on Monday at 7.30pm.