Corrie: Asha tells Nina she didn't give Corey an alibi

Nina (played by Mollie Gallagher) has been on a path of self-destruction since she and her late boyfriend, Seb Franklin (Harry Visinoni), were the victims of a heinous hate crime several weeks ago on Coronation Street. The one person she has been hellbent on seeing get sent down for her lover’s death is villainous Corey Brent (Maximus Evans), who was recently charged with murder as new evidence had come to light about his involvement in the attack. However, when Nina goes to seek deadly revenge in upcoming scenes on the ITV soap, she will find she has a saviour in mischievous Daisy Midgeley (Charlotte Jordan).

The drama begins next week when having spent the night in the ginnel, Nina finally manages to stumble home to the café.

She lies to her uncle Roy Cropper (David Neilson) about where she has been but he encourages her to put her efforts into something else.

He suggests she tries working on a graphic novel but instead of agreeing with the soap stalwart, the youngster tears up all the pages.

Hoping to help his niece, the café owner recruits Asha Alahan (Tanisha Gorey) to asset him with putting the pages back together.

They post the pictures of Nina’s art on her social media platforms but the teenager is furious when she discovers what the pair have been up to. 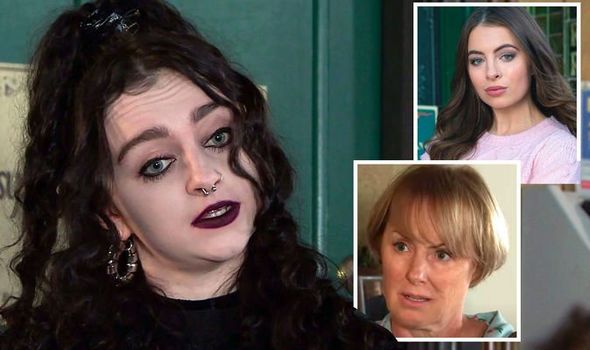 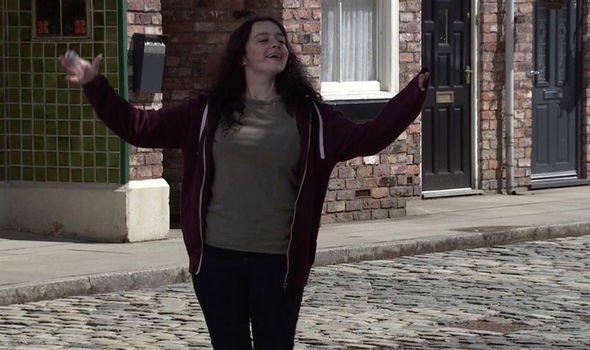 Later on, Nina is seen stealing some vodka from the corner shop but she is stopped in her tracks by Carla Connor (Alison King).

Having recently nursed her husband Peter Barlow (Chris Gascoyne) through alcoholism, she informs the teenager hitting the bottle won’t help.

The factory owner’s words fall on deaf ears as the youngster continues her venture down a dark path by joining Daisy and her friend Noah at the bistro.

As the drinks begin to flow, the troubled character flirts with the handsome man, who becomes uncomfortable with the situation.

He instructs Daisy to take the youngster home before she drinks herself silly and that’s exactly what the barmaid does. 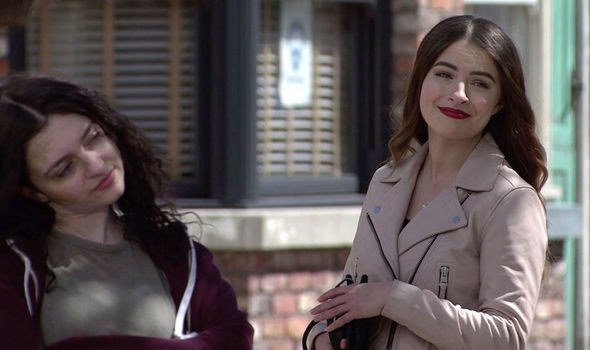 It is very much about saving herself

As Daisy goes to hand Nina over to Roy, the youngster jumps into a taxi and heads into town, leaving her uncle terrified for her wellbeing.

When she returns home the next morning, the Gothic character continues to cause worry for her uncle and he’s anxious when it seems she is ill-prepared for a job at the Underworld factory.

Unfortunately, the meeting doesn’t go to plan and she ends up telling Sarah Platt (Tina O’Brien) to stick her job.

Needing to drown her sorrows, she heads to the Rovers Return where she bumps into Hughie, a guy she met on her night out. 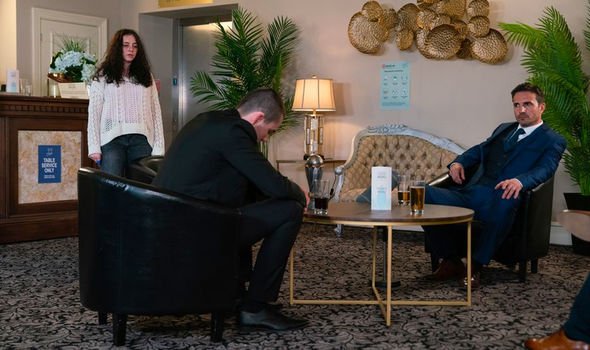 Daisy expresses her worry for Nina, especially when Hughie says they should go back to his hotel room in town.

Despite opposition, the youngster agrees to go with the stranger but her mood suddenly changes when she sees Corey at the hotel.

She watches on as he sits with the players of Weatherfield County football team after winning the Best New Talent award.

Knowing this is all wrong, Nina bursts over to the table and tells all the players how Corey murdered her boyfriend.

The players and Corey decide to leave but as they do, Roy’s niece picks up the award and follows them in quick pursuit.

It seems she has the idea in her mind to kill Corey after he took her boyfriend’s life in cold blood after being let out on bail.

However, having overheard where Nina was going and being sceptical of Hughie’s intentions, Daisy could have followed her to the hotel.

Just at the point the youngster is going to deal the fatal blow to Corey, the barmaid could stop her in her tracks.

This would ultimately save Nina from a lengthy jail sentence for murdering someone and Daisy could become a great support to Roy’s niece.

Will the Gothic character appreciate the intervention or will she be forced to push Daisy further away?

The actress who plays Nina, Mollie, has spoken out on this new direction for her beloved character in the wake of Seb’s death.

“I do think it is very much about saving herself. She has the wise words of Roy in her ear, and he is always trying to help, and it does make her open her eyes.

“We will learn a lot more about Nina, what the relationship with her dad is like and how she lost her mum and dad who were the most important people in her life.

“But it needs to come from herself. She needs people to listen to her and she needs to share her emotions which is something that I don’t think she tends to do that much,” the soap actress explained.

But will Nina allow others to help her through one of the darkest moments of her life?