Coronation Street is the longest-running soap in the UK and has seen many characters come and go over the years. However, the anniversary week episodes are known for their particularly explosive storylines. Despite this, with the ITV soap’s latest set of celebrations not far off, it seems the coronavirus pandemic has resulted in those working behind-the-scenes having to come up with a new alternative.

The soap has had some dramatic stuns in recent years, with last Christmas providing a dangerous siege which saw two characters dead.

For its 50th anniversary, the programme aired a devastating tram crash which saw multiple residents lose their lives.

And with this having now taken place 10 years ago, it’s just a matter of weeks before the soap will mark its next big milestone.

But for the 60th anniversary, things will be slightly different. 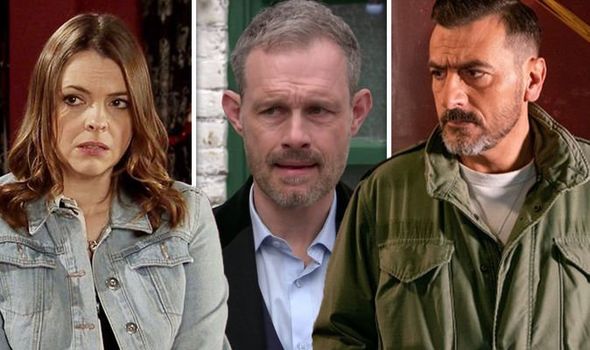 The ongoing coronavirus crisis meant the soap was forced to “shelve” the challenging stunt it had planned.

Speaking earlier this month to Express.co.uk and other press, Corrie boss Iain MacLeod explained the change of plans.

Asked whether the pandemic had affected what was originally meant to take place, he admitted: “Yes, in a word it has.

“We had planned – right before the pandemic – to be doing something that was quite a production intensive and challenging and would have required lots of SFX and elaborate design builds from our brilliant design team.”

The soap had to halt production back in March due to the new coronavirus guidelines which resulted in a national lockdown.

Iain continued: “We had all of that in play and then discovered quite quickly, that actually we won’t be able to do any of that whilst remaining socially distanced…

“All of those builds that we had planned would have taken until 2022 to get done if we had to work at two metres social distancing!”

Iain explained how it would work, adding: “So we shelved that quite quickly, but actually, what we still got in that week, are all the stories that would have generated all those big production set pieces, they’re still there.

“So we’ve just shifted the dial and made the consequences much more about human consequences, you know, love, loss, tragedy, and triumph, all of those sorts of classic dramatic impulses are still in there.”

But the show boss remained excited for what was to come and teased the dramatic scenes ahead.

“The stories broadly will be exactly the same, so is in a weird way, and I don’t think losing all that other stuff has really diminished at all.

“What we love about Coronation Street is all the other stuff I’ve just mentioned – it’s the tragedy, the human impact stuff, the love stories, it’s the shock twists, and all the rest of it,” Iain noted.

This doesn’t mean there won’t be some big-budget scenes to come.

The show boss revealed: “There’s a little bit of a stunt component! But it’s much more grounded and story-driven than it might have been if we’ve just gone to the full Hollywood extravaganza.

“So, yeah, we’ve scaled it back in terms of its visual scale. But actually, I don’t think that week has suffered at all really based on the script,” Iain added.

But will any of the ITV soap’s residents end up losing their life in the upcoming anniversary specials?