Coronation Street character Nicola Rubinstein has left the cobbles after Pat Phelan’s demise, but is she gone for good?

Kym Marsh, who plays Michelle Connor, believes that the door is open for a return for actress Nicola Thorp.

“It was announced recently that Nicola Thorp is leaving the soap,” she wrote in her OK! Magazine column. “I’m sure it’s not the last we’ve seen of her – she’s a great actress.” 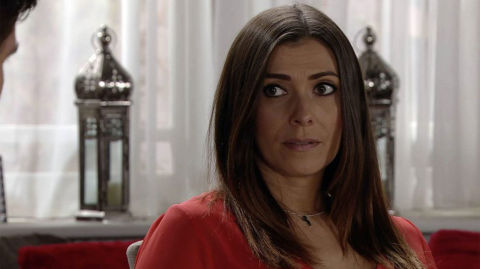 Kym also commented on Catherine Tyldesley’s exit as Eva Price, wishing her luck for the future.

“I wasn’t involved in her last scene, but I heard it was quite emotional,” she said. “Sadly, I didn’t see her to give a hug goodbye, but I sent her a text. She’s a great actress, and I’m sure she’ll do really well in whatever she does next.”

Thorp confirmed two weeks ago that she has left the soap after her character departed for Bristol with her son and Eileen.

“Hey everyone,” she said in a goodbye video. “I just wanted to say I’ve had the most incredible year here working at Corrie.

“To be involved in Phelan’s demise has been an absolute treat, and I hope you’ve all been enjoying it as much as I have enjoyed filming it. I’ve got wonderful friends, a family that I’ve made here, and I’ll be really, really sad to say goodbye for now.

“Thanks for having me, and keep on watching. You’ve been the most incredible fans that anyone can ever ask for, so thank you.”

Digital SpySoap Scoop video – hit play below for all the latest Coronation Street spoilers, as Jack’s life hangs in the balance and Ryan’s date with Bethany goes disastrously wrong.