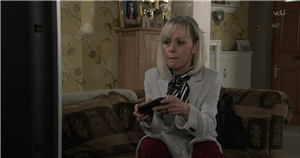 Coronation Street fans were left baffled by a glaring blunder on Wednesday night as Sharon Bentley wheedled her way into Dev Alahan's house.

Sharon pretended she'd lost an earring at Dev's in order to log into his son Aadi's Xbox and communicate with Simon.

And as she tapped out a message about Seb's death to attempt to draw the youngster back to the Street, Dev strutted into the room.

But instead of switching off the television, Sharon simply moved to stand in front of it – but only managed to shield half the screen.

And baffled viewers flocked to social media to share their confusion at the glaring blunder.

"The first thing he should've said was wtf are you doing with my TV! #Corrie," one penned.

Another queried: "Surely Dev can see the TV is on behind her, wouldn't he want to know why?"

While a third viewer posted: "So he's not gonna ask why she has the TV on ffs… this Sharon storyline is ridiculous beyond belief."

"How is Dev not noticing the TV is on?" another confused Twitter user typed, as another quizzed: "Is Dev blind? The TV is on guy!"

Sharon managed to explain her way out of the sticky situation as Dev mistakenly assumed she had been flirting, and entered his home simply so they could elevate their friendship to the next level.

"After a long and unhappy marriage, truth is I'm a bit rusty at all this," a worried Sharon said as she bluffed her way out of the burgeoning tryst.

Eventually, the two decided to remain as friends for now, as they both had things going on in their personal lives.

But she used the opportunity to get Aadi away from his games console, warning Dev that the video games he was playing were full of "violence".

"I had to ban my nephew from playing it!" she warned, terrified of being caught out by her sly messaging scheme to lure Simon home.

"After Seb, I think you playing these violent beat-em-ups is a little insensitive," Dev eventually explained to his son, as he told him he'd hid the controller.

But Aadi wasn't upset by the move – he said that if only his dad had talked to him about it, he would have stopped playing the games regardless.

But other viewers were even more distracted by the controller itself, as it didn't appear to be official Xbox hardware.

"What even is Simon and Aadi's game console supposed to be? It's not a PS5, not an Xbox One, not a Switch… Is there some secret fourth next gen console none of us know about?" one wondered on Twitter.

Someone else pointed out: "You telling me Dev who owns multiple businesses and Nick who owns a knicker factory can't afford to buy their kids an Xbox SX, PS5 or even a Wii?"

"Have the Corrie writers ever seen a gaming console in their entire lives?" a third viewer penned.