Couple renovate a 1997 double-decker bus into their dream home 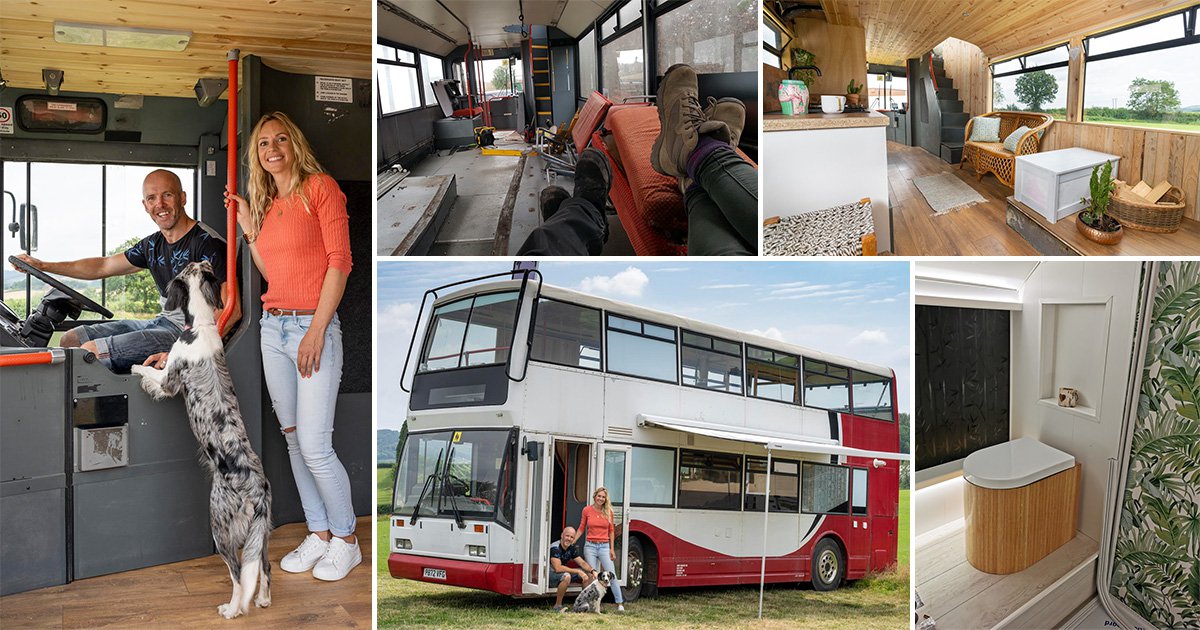 A newlywed couple spent £22,000 on converting a double-decker bus into their dream home – and their house on wheels is now ready to roll.

Gareth Hollingsworth, a 40-year-old solar installer, and 39-year-old Lamorna Hollingsworth from Hereford, UK met while they were both travelling abroad, and soon found that they shared a love of exploration.

After their wedding in 2019, the pair went on a year-long honeymoon travelling the world in a camper van.

However, when returning from their honeymoon in February 2020, the couple realised that they didn’t want to stop travelling altogether.

‘On our return from a truly epic honeymoon, talk turned quickly to the idea of buying a larger van and seeing more of Europe,’ said Gareth.

Talks of vans led to talks of buses, and after a couple glasses of wine, the couple bought a double-decker on eBay: the 1997 Scania bus for £4,000.

For them, it felt like a step in the right direction.

‘Not an easy one,’ said Gareth. ‘If it was, everyone would be doing it, but we like a challenge.’

And a challenge it has been, but one that will be worth all the effort.

Gareth likes to think of the double-decker bus as a tiny home, as opposed to a camper van.

‘We chose a bus because we wanted enough space to live in comfortably, but with the ability to move,’ he said.

The pair have spent nearly two years working on the bus, spending an estimated total of £20,000 on the project, including another £4,000 on solar power and batteries and £1,000 on getting the right driving licence.

The renovation involved entirely stripping the bus of its old floors, ceilings, walls and radiators, adding in fresh ones – as well as a water tank to allow for everyday living.

The bottom floor of the bus contains a fully-functioning kitchen, with a full-sized oven, sink, and fridge-freezer, along with a slide-out pantry and overhead kitchen storage.

There’s also a log fire to keep the double-decker warm and a composting toilet and shower too.

Upstairs is a multi-functional office and lounge area with a double bed and purpose-built wardrobes, with solar panels on the roof.

‘Every job takes longer than you think,’ said Gareth.

‘Nothing is square, nothing is level, every wall is curved and you can say goodbye to a spirit level as the bus isn’t parked on level ground.’

The pair repurposed and recycled where possible. They also shopped around online and did all the work themselves to keep to budget.

Gareth and Lamorna are currently living in a trailer next to the bus along with their dog Maya, who will be joining them on their double-decker journey.

‘We wouldn’t be without Maya now, even if she brings muddy paw prints into the bus,’ Gareth shared.

‘Space is a premium, and we have to really think outside the box to ensure we make the most of it.

‘An example of this is a bookcase which doubles up as the door, opening on secret hinges by pulling the right book.’

The pair get ‘itchy’ if they spend too long without travelling, and are looking forward to getting back out on the road.

The eventual plan is to settle down in Spain or Portugal, but for now, they’re simply excited to get going.

“Most people are either envious or think we’re mad. There are so many issues with driving double-deckers – but the challenge is part of the fun,” says Gareth.

‘We will be mortgage-free, have a house on wheels, and be free to see the world and enjoy its delights.’