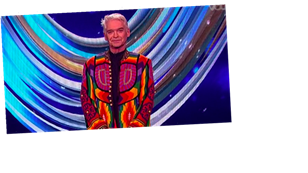 Dancing on Ice viewers were shocked on Sunday night when host Phillip Schofield made a rather cheeky comment following the first performance of the night.

Phillip, 58, hosts the popular ITV show alongside Holly Willoughby and had dressed the part for Musical Week wearing his technicolor dreamcoat.

Faye Brookes was the first celebrity to take to the ice with her professional partner Hamish Gaman and the pair paid homage to Mary Poppins for their musical performance.

After receiving positive comments from the judging panel and a score of 29, Faye looked chuffed and stunning in her Mary Poppins attire. Urging viewers at home to pick up the phone and vote for Faye, Phillip said: “If you don’t want things to turn hairy for our Mary…"

Mum-of-three Holly immediately burst into laughter, along with Faye and Hamish – and fans of the show couldn't wait to post on Twitter.

One person wrote: "That’s the greatest thing @Schofe has ever said! #DancingOnIce “If you don’t want things to turn hairy for our Mary." Another tweeted: "OMG did @Schofe really just say on telly about things going hairy for our Mary lmao #LiveTV #DancingOnIce."

However, another person found it hilarious and posted several laughing face emojis along with: "no one wants a hairy Mary Phil."