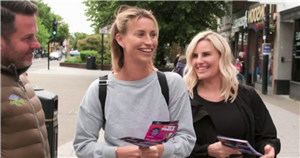 Ferne, 31, split from ex Jack Padgett in June and their emotional breakup was shown during last week's episode.

During the latest instalment, Danielle and Ferne decided to go leafletting in Essex as they promoted their health and fitness business.

And it wasn't long until Danielle played matchmaker as she encouraged Ferne to flirt with a potential customer as they spoke to him on Brentwood High Street.

Whispering in her friend's ear, Danielle teased: "Older man? Stick your number on the back of the leaflet!"

To which Ferne told the man: "I am so sorry!"

Speaking to the camera in a VT, Ferne admitted: "Oh Dan, you're not making this any easier! Last night, Jack picked up his things and the next day, she's pushing me to meet someone new whilst leafleting!"

Going back to the leafleting, Ferne and the man appeared to have a flirt, as Danielle commented: "Oh, felt a bit of a spark there!"

To which she confessed: "I've lost it, I used to be bee's knees at flirting. I need to up my game!"

At the end of the conversation, he said: "Do you want to take my number?" as Ferne punched the air in celebration.

Talking to her friends later in the show, she said: "So I went leafleting with Dan and I had a random flirt with a random guy on Brentwood High Street. He was a bit of an older guy!"

However, Ferne added: "He wasn't my type, at all, but it was just nice to have a little flirt.

"I want someone to take care of me, that's why I'm going for an older guy!"

For all your updates on Ferne McCann, her work commitments and romantic life, sign up to our daily OK! newsletter.