Declan Donnelly WILL have a co-host for I'm a Celebrity this year, it's been confirmed

Ever since the announcement that Ant McPartlin will not be hosting I’m a Celebrity this year, fans have been wondering who might take his place on the hit ITV show.

Despite all of the names that have been thrown into the hat – including Extra Camp‘s Scarlett Moffatt and BGT‘s Stephen Mulhern – many wondered whether Declan Donnelly might do the whole thing solo.

(Well, he did do a sterling job of hosting Saturday Night Takeaway and the Britain’s Got Talent live shows on his own.) 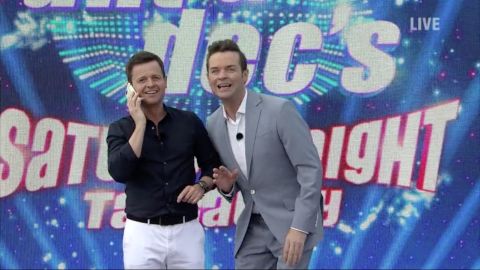 However, ITV bosses have now thrown cold water on this idea, instead confirming that someone WILL take Ant’s place for the 2018 series.

Speaking at the Edinburgh TV Festival, ITV’s head of studios Kevin Lygo confirmed that the channel will find someone to stand by Dec’s side.

News of Ant’s decision broke in early August, when a joint statement was released via the presenting duo’s Twitter account.

The announcement revealed that Ant will “continue to take a break from all television presenting roles until 2019”, which includes the 2018 series of I’m a Celeb as well as the pair’s joint venture Saturday Night Takeaway.

“They will instead bring the show back in 2020, bigger and better than ever,” the statement added of Takeaway.

At the time, Dec said: “Whilst I am obviously sad at the thought of being without my best friend in Australia this year, I am proud of the work Ant has been doing privately and I am fully supportive of his decision.

“I’m looking forward to us both being reunited on screen in 2019.”

I’m a Celebrity… Get Me Out of Here! will return to ITV later this year.