DERMOT Kennedy has teased he could team up with his pal and fellow Irishman, actor Paul Mescal, after meeting up in the US where he has been working on his new album.

The singer-songwriter befriended Normal People star Paul during lockdown and was surprised to discover he can sing as well as act. 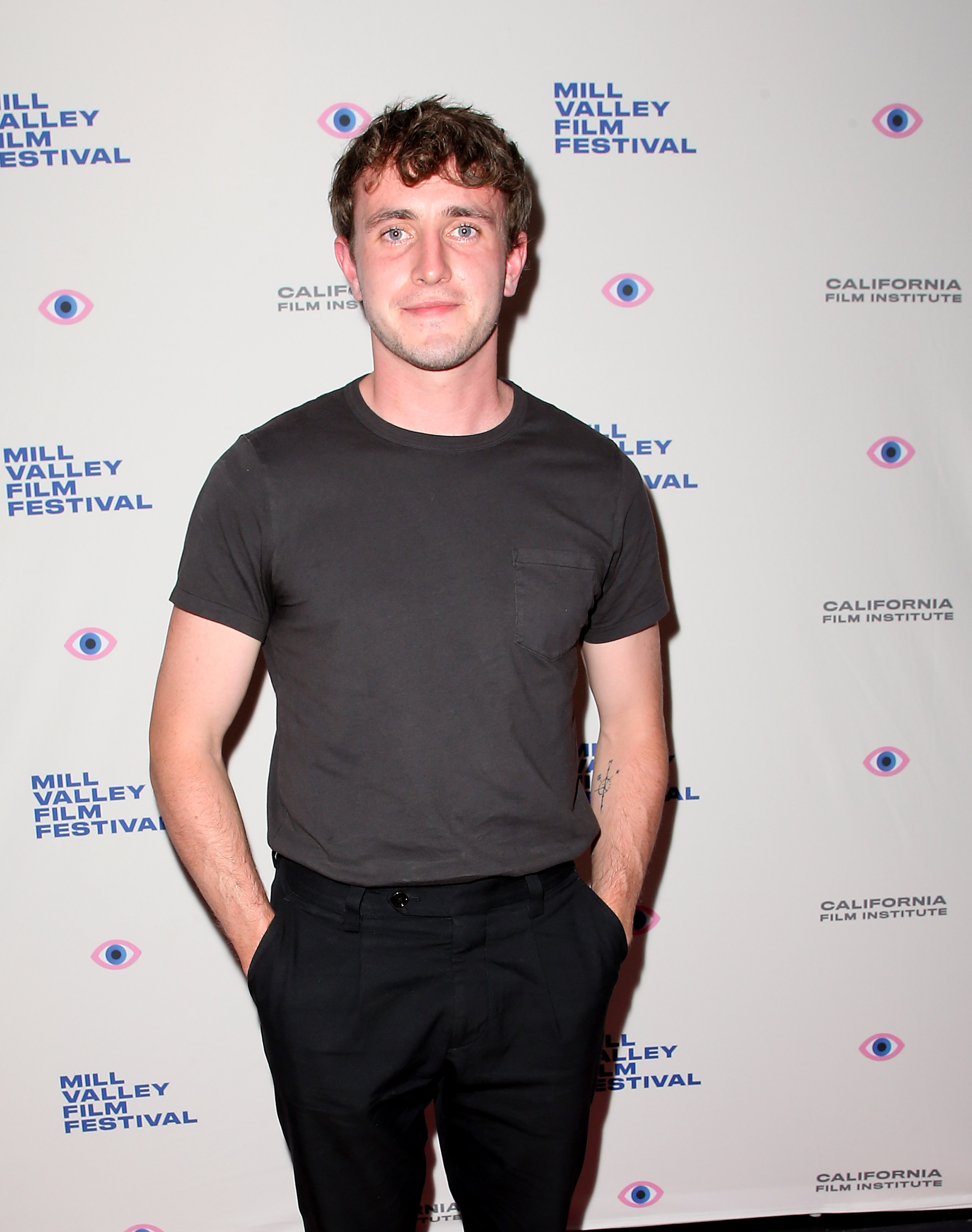 Asked about the prospect of them collaborating on a track for his second album, Dermot said: “Maybe, I’m not sure.

“I saw him just last week in Texas. He’s in good form. He can do what I do, I’m not sure I can do what he does. Acting is a whole different thing. The only way I could make that work is if I got lost in it.

“The idea of just turning it on, I could not do. But if I was like Daniel Day-Lewis, full method acting and pretending to be Abraham Lincoln at home, I would love that.”

The Outnumbered singer topped the charts with his debut album Without Fear two years ago and admitted he is feeling the pressure when it comes to his follow-up.

In an exclusive interview, he explained: “I’ve been working on music. I just got back from LA and am about to go to New York and I’m just chipping away.

“It’s the interesting thing with the second album where you don’t know how good anything is because your perspective is so different compared to the first one.

“The first album you’re so sure of everything, whereas this is trying to work it out.”

TWO'S UP FOR THOM AND NIC

I WAS sceptical when they first got together on The X Factor: Celebrity but Nicole Scherzinger and Thom Evans are going the distance as a couple.

Nicole and the former Scotland rugby union star were photographed on a date night in Los Angeles on Monday evening.

And next month will mark their two-year anniversary.

The unlikely pair had moved in together by the time the pandemic made everyone lock down and they have been more or less inseparable ever since.

Plenty has been said about The X Factor over the past few years.

But Thom must feel like a real winner to have walked away from it with Nicole as his girlfriend.

KATE Beckinsale has admitted it wasn’t a death-defying stunt for her next movie that led to her being rushed to hospital in an ambulance last month.

The star of the high-octane Underworld franchise fell over while getting dressed.

She said: “I was in my hotel room putting on a pair of leggings, then it felt like a sort of guitar string snapped.

“Everything was horrific. It was worse than having a baby. I couldn’t walk, lie down, sit down, anything.

“Eventually an ambulance came and they rolled out a sheet and picked me up in it, like a sort of a sausage, and put me on a gurney.”

CHART-TOPPING DJ Joel Corry has revealed his schoolteacher mum Debbie has become a key part of his marketing team because she forces her pupils to sing his songs in assembly instead of hymns.

In an exclusive chat, the producer, who went to No1 last year with Head & Heart and has spent the past eight weeks in the Top Ten with Out Out – told me: “Her students love it.

“What’s so sweet is that my song Sorry, they have it as their assembly song.

“The kids love it and all my mum said all the teachers in the staff room are always after the gossip of what’s going on.

“My mum feels like the celebrity mum at school which is so cute. She is quite traditional, she’s reserved. But she’s buzzing.”

Debbie was in the crowd at Radio 1’s Out Out! Live concert at Wembley Arena on Saturday, which you can catch up on through BBC Sounds and iPlayer.

But she probably won’t see him for a while again now, as he is spending this week shooting his next video and then kicks off a six week tour around the UK and Ireland on Friday with a show in Aberdeen.

IT'S ALL TOO EASY FOR ADELE

ADELE will celebrate having the fastest-selling single of the year on Friday, with Easy On Me already outselling the rest of the star-studded Top Five combined.

I got hold of sales figures for her comeback record, which had shifted 124,469 copies here since its release on Friday. 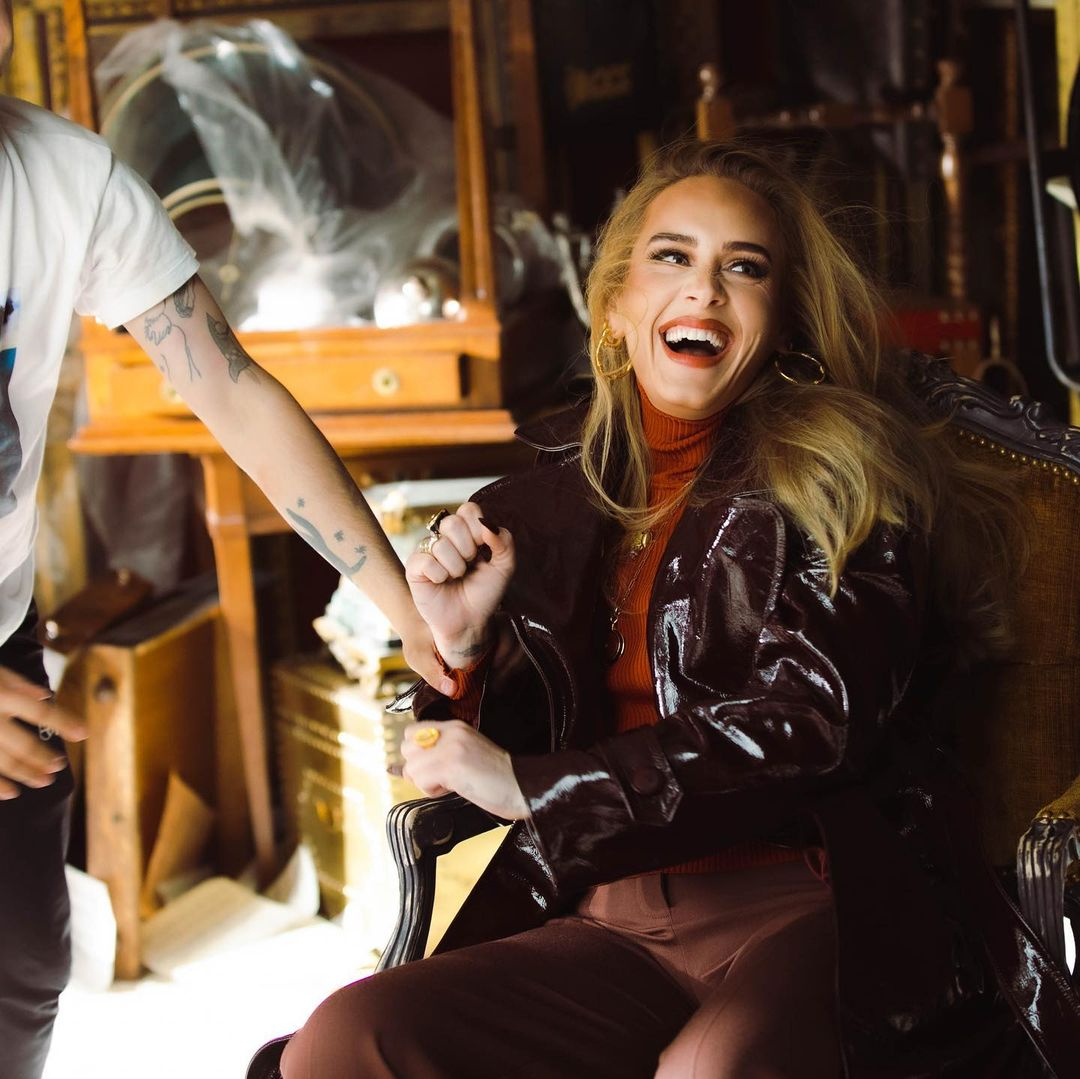 That is almost 90,000 more than her nearest rival, last week’s No1 from Elton John and Dua Lipa, Cold Heart.

The remarkable numbers put her well ahead of other huge chart forces including Ed Sheeran, with Shivers, plus Coldplay's collaboration with Korean boyband BTS, My Universe.

She’s set new Spotify records too, racking up more than 1.3million daily streams and a high of 2.8million on Friday.

The previous UK record was Ed’s 1.33million in a day for Shape Of You.

IT may be almost winter but Zendaya isn’t letting plummeting temperatures get in the way of her style.

The actress opted for a seriously skimpy brown dress as she partied in London on Monday night following the glitzy red carpet premiere of her sci-fi epic Dune. 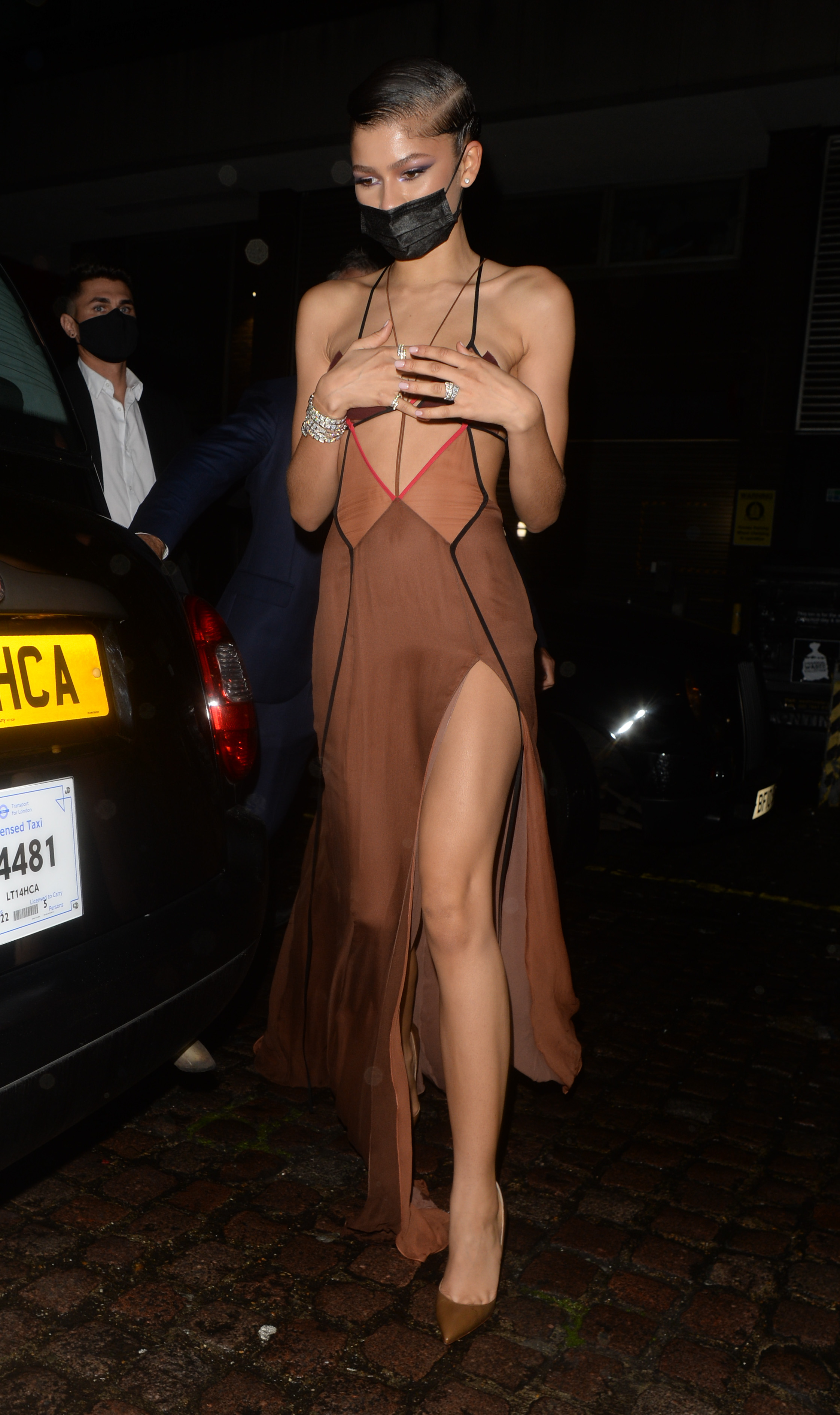 She was joined by her co-stars Timothee Chalamet and Jason Momoa at celebrity haunt Chiltern Firehouse to celebrate the movie, which had its release delayed by a year because of Covid.

Opening up recently about how she would take high street clothes over couture if she felt more comfortable, Zendaya said: “When I was 14 and at my first movie premiere, my outfit was a bunch of stuff that I had from Target. And I thought I was fly. I felt cool.

“To this day, I think that’s really all that matters. Then you know you’re doing the right thing.”

CELINE DION has cancelled November and January gigs in Las Vegas to recover after experiencing “severe and persistent muscle spasms”.

The Canadian singer said: “I’m heartbroken by this. My team and I have been working on our new show for the past eight months and to not be able to open this November saddens me beyond words.

"Now, I have to focus on getting better… I want to get through this as soon as I can.”

BASTILLE GIVING US THE FUTURE

BASTILLE will release new album Give Me The Future on February 4 and yesterday the band put out their latest single No Bad Days to celebrate the announcement.

Frontman Dan Smith said: “Working on these songs in such an apocalyptic period, with everyone stuck at home, glued to screens, fed into the feeling that what is real and what is not has become pretty difficult to discern sometimes.

“We’re in the age of deep fake, fake news and lying world leaders. But online, you can be anyone. What that does to our sense of self and to our relationships is huge and it’s fascinating.”

CARA Delevingne has revealed how a whirlwind fling ended with her having sex in a lift.

She told the Ellentube series Lady Parts: “I’ve had a one-night stand when I was a lot younger but I remember the spontaneity of it.

“The person I was with, we were playing music for three hours. I was on the drums, he was on the guitar, and then we swapped.

“Then he was going to drive me home and we had sex in the elevator.

“It was so sexy. It was amazing. It’s not that I didn’t like him, I had met him that day or whatever and was like, ‘This is crazy’.”