Domina Sky cast: Who is in the cast of Domina?

Domina airs every Friday at 9pm on Sky Atlantic and historical-drama fans want to know everything they possibly can about the gripping new series. The cast of Domina spoke to Express.co.uk and other press about the series and its characters.

Who is in the cast of Domina on Sky?

Drusilla married the future emperor Caesar Augustus, who had arranged for Livia to divorce from her first husband Tiberio Claudio Nerone.

Drusilla is suspected of killing her husband his nephew Marcellus and following their deaths, she inherited a large share of Ceasar’s property.

She was determined to secure power for her son Tiberius and establish a Republic.

Speaking to Express.co.uk and other press Smutniak said: She was so clever. She was so amazing and she was in a way the first feminist. Her whole life she fought for rights for women, for herself, for her family.”

Smutniak is a Polish-Italian actress and model who is best known for her role as Nina Morgan in Devils.

In Devils, she starred alongside Mario Ruggeri and Patrick Dempsey.

Her other credits include From Paris With love, Dolittle and Loro. 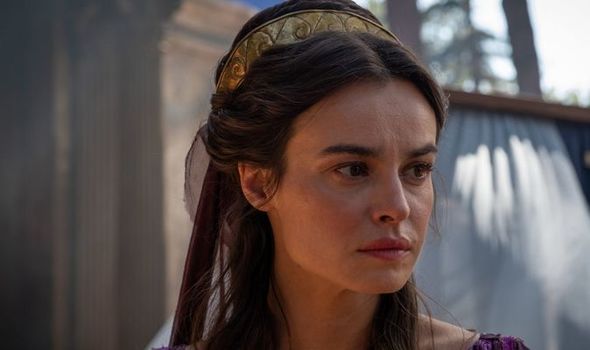 Nadia Parkes portrays the young Drusilla in Domina on Sky.

Speaking about taking on the role of the young Livia Drusilla, Parkes said: “The most interesting thing that I found out [about Drusilla] was she progressed so much of what we understand as feminism now and the female empowerment movement.”

Parkes is best known for her role as Rosa in the Starz series The Spanish Princess.

Her other well-known credits include Starstruck and Doctor Who.

Matthew McNulty takes on the role of Gaius Julius Caesar Augustus, the second husband of Livia and the future first Roman emperor.

Gaius Julius Ceasar was the great-nephew of Julius Caeser and was named in his will as his adopted son and heir.

McNulty told Express.co.uk and other press: “The great thing about Gaius and the attraction to this particular script is that he is intelligent, he is ruthless, he is scheming and he has got this drive for power that stems from a God complex basically, he thinks he is greater than humanity.”

McNulty is best known for his role as Dave in Cleaning Up and Nick Mooney in The Bay.

His other credits include The Musketeers, The Terror and Versailles.

Carney is an English singer and songwriter, best known for his role as Peter in the Christopher Nolan war film Dunkirk.

Cilenti is best known for portraying Kip Thorne in The Theory of Everything and Antonio Bonvisi in Wolf Hall.

His other well-known credits include Jonathan Strange & Mr Norell, The Martian and Luther.

DON’T MISS…
Domina Sky cast: Which characters are based on real people in Domina? [EXCLUSIVE]
How many episodes are in Domina on Sky? [DETAILS]
What time does Mare of Easttown come on?  [SHOW INFO]

Agrippa has gone down in history for establishing some of the most notable buildings in Rome, including the original Pantheon and Rome’s numerous military victories, most notably at the Battle of Actium in 31 BC against the forces of Mark Antony and Cleopatra.

Speaking to Express.co.uk and other press, Batt said: “What attracted me to Agrippa the most was I enjoyed we had this incredibly hardened battle-ready successful general who also must have been a fiercely intelligent man, designing certain infrastructure in Rome, helping to build the pantheon and sewage systems in Rome.

“He was just a very very powerful figure who did not once make a grab for power himself and I thought that must of been very interesting at the time.”

Batt is best known for his role as Joe Pritchard in Shameless and John Cartwright in The English Game.

His other credits include Blue in Our Girl and Ryan Chelford in W1A.

Marco is Livia’s father, who took his own life after the battle of Philippi in 42BC.

Speaking about his character to Express.co.uk and other press, Cunningham said: “The relationship that they have [his daughter Livia] is extraordinary.

“He didn’t treat her as, most women were, a second class citizen, he taught her about politics and diplomacy and the reasonability of duty and he treated her as an equal and has an unquestionable love for his child and I found that incredibly interesting in this huge epic story there is a humanity in it and that is the kind of thing, as an audience member, I find intriguing.”

Domina fans will most likely recognise Cunningham from his role as Davos Seaworth in HBO’s Game of Thrones.

His other credits include The Vault, 24 Hours to Live and Merlin.