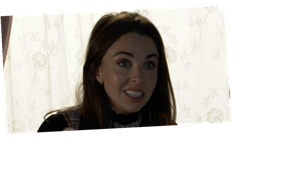 EastEnders viewers are convinced there is set to be another hot new couple in Albert Square.

Kush Kazemi (Davood Ghadami) returned to Walford on Tuesday after unexpectedly fleeing with his young son Arthur in tow.

Ruby Allen (Louisa Lytton) has attempted to get one over her rival Stacey Slater (Lacey Turner) by paying Kush to run away from Albert Square, only to later cut off the money.

Stacey was completely distraught over Kush and Arthur's disappearance and begged her former flame to bring their son home.

Kush had nowhere else to go, so he turned up on Ruby's doorstep with his suitcase in hand — insisting that he would be staying with her and Martin.

Ruby told Kush that none of his troubles were her problem, but Kush countered that "they would be if Martin found out you were funding my escape".

The drama continued during Thursday's episode and Martin made it clear he wanted Kush out of the house as soon as possible, but later changed his mind.

Kush later chatted to Ruby over the breakfast table and viewers are convinced they are going to get together.

Taking to Twitter, one fan penned: "Ruby and Kush are so going to get together, calling it now."

While a fourth wrote: "Ruby and Kush are either gonna have a affair or Martin is going to find out that Ruby helped Kush, he'll get back with Stacey and then Ruby will get wish Kush."

The couple got close when Stacey was away from the Square.

When Stacey found out the pair were an item she began stealing cash from her former best friend.

Ruby caught Stacey out and they have been at each others throats ever since.

In a shock twist, Ruby told Martin that she was expecting his baby at the end of the dramatic episode.

Will Martin go straight back to Stacey when he discovers Ruby and Kush's secret or is Ruby planning on using Kush to get her pregnant?

EastEnders continues on BBC One on Friday ay 8pm