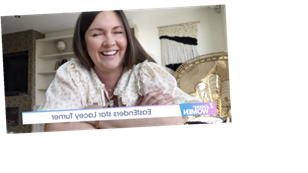 EastEnders star Lacey Turner has revealed she got back into bed after her waters broke because she was “too tired”.

The 32 year old soap actress opened up on the birth of her second child Trilby after introducing the adorable tot in an exclusive interview with OK! magazine.

Lacey, who recently shared a sweet snap of her newborn baby son, gave brith to Trilby a month before her due date.

But, has admitted how she was initially in denial that she was in labour after her waters broke.

Speaking on Loose Women via video link on Tuesday 23 March, Lacey shared her shock at how dramatically her waters broke.

She recalled: “I was sitting here minding my own business, I'd gone up to bed – I hadn't packed a hospital bag or anything.

“I’d got the case down ready to pack it that week but, you know, with the second one you're just so laid back.

“I’d washed a few babygrows but that was it. I went to go to bed and it was like whoosh! I thought that only happened in films so I was like, surely not.”

Lacey went on: “And I thought, ‘no, I can’t, I'm so tired,’ so I got into bed and pretended it wasn't happening.

“Then I thought, ‘I can't do this, I'd better phone them up,’ and they said ‘come up now,’ so I threw some Mini Eggs and a nighty in the case and off I went.”

Lacey, who is also mum to her one year old daughter Dusty, then welcomed her baby boy a month before he was due to come into the world.

And, in her exclusive chat with OK! magazine, the soap star revealed her birth with her second child was very different compared to her first.

She told OK!: “He came at 36 weeks! It was around 11pm and I was just about to go to bed and my waters broke like something out of a film.

“I had no idea that would happen, as my waters didn’t break with Dusty. I didn’t know you could have that much water, I thought it was for TV purposes only!

“I didn’t panic, although I probably should have. I actually thought, ‘Please, not tonight, I am so tired!’ I really wanted a water birth, like with Dusty, but you can’t have that before 37 weeks. That was disappointing. I just thought, ‘No, this is fine, we’ve still got time.’”

Lacey admitted to OK! that she was exhausted ahead of her son’s birth.

“I got in bed and the water was just trickling so we called the hospital and they said to come in,” Lacey explained. “My mum came to watch Dusty. When I got there, I said, “I really can’t be bothered to give birth tonight because I don’t have the energy.” I was only 1cm [dilated] but as my waters had broken, I had to stay.”

She said: “I didn’t even have time to break into a sweat!”