Emma Raducanu grips millions of viewers on Channel 4: ‘Incredible just to see her’ 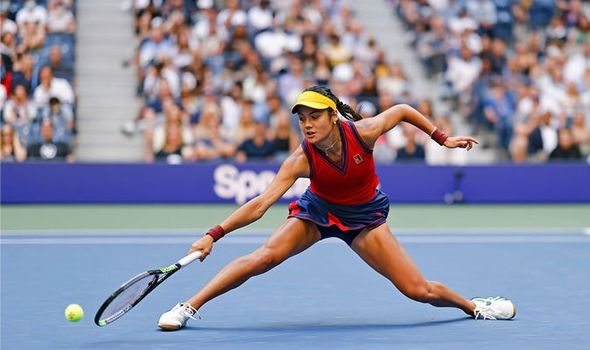 Some 9.2million watched Emma make history at the US Open on Channel 4 alone with millions more gripped via Amazon Prime.

The terrestrial channel paid seven figures to rights-holder Amazon to broadcast the match.

And it paid off as Emma, 18, become the youngest British Grand Slam champion in history.

Cheering her on courtside were tennis greats Tim Henman and Virginia Wade, the last British woman to win a major trophy – 44 years ago at Wimbledon 1977.

Virginia, who was namechecked by Emma as she lifted her trophy, said of the teenager: “I can’t tell you how exciting it is. We’ve been waiting such a long time for a British player on the women’s side to really come through.

“Every time you watch her you think she’s going to win every point… she is the real thing.”

Tennis royalty aside, Raducanu was also thrilled to receive a letter from the Queen while she was still on the tennis court – and yesterday revealed she will frame it. Her Majesty wrote: “I send my congratulations to you. It is a remarkable achievement at such a young age, and is testament to your hard work and dedication.

“I have no doubt your outstanding performance will inspire the next generation of tennis players.”

Prime Minister Boris Johnson tweeted his congratulations, writing: “You showed extraordinary skill, poise and guts and we are all hugely proud of you.”

Closer to home, friends of the champ and those who trained her jumped for joy on Saturday night at the Parklangley Club in Beckenham, Kent, where Raducanu learned how to become a winner from the age of six.

Harry Bushnell, who coached her until she was 10, said: “It’s a testament to her because she’s such a pleasant person, on and off the court. That’s why so many people are getting behind her.”

Suzanne Williams — Emma’s strength and conditioning coach until she hit 12 — said: “It’s absolutely incredible just to see her develop and become this player. Of course, I could see there was some incredible potential there.”