Cruella star Emma Stone did her first red carpet of the year last night—and first public event since she welcomed her first child, a baby girl, in March. Stone wore a Louis Vuitton suit to Cruella‘s Los Angeles premiere with a red lip and her long red hair down in curls. 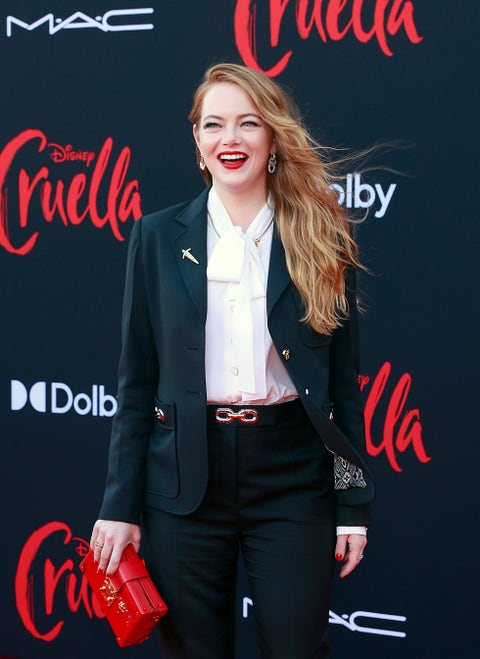 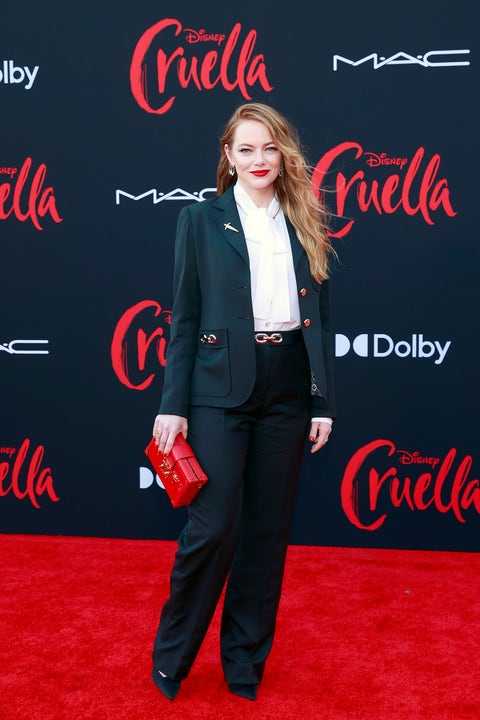 Emma has kept details on her life as a new mother private. But she did speak this week on SiriusXM’s The Jess Cagle Show about her longtime celebrity crush on Leonardo DiCaprio and how it felt accepting her Best Actress Oscar from him in 2017.

When she walked onstage to get it, Leo was what she was thinking about: “That was what was going through my mind ’cause it was him. And I was like, I’d seen Titanic seven and a half times in theaters. He was the love of my life. I had a picture of him in my bedroom that was signed, that I had gotten for my birthday when I was like 12 years old, and I was walking to Leo, and I was like, this is officially the most surreal moment of my life. I could not believe it. I think he probably thinks I’m like a little weird, cause whenever I see him, I’m kind of like, ‘Hey, how’s it going?’ You know, just in little moments either at the same event or something. He’s very sweet though. But that was truly, that was what was the craziest experience was the fact that it was him.”

“He’s very tall,” Emma added. “And he’s so lovely, but you know, it’s, it’s kind of unfair because it’s something that I don’t, I don’t really believe in that much. The idea that you like term real people into, like this other idea that’s always been so, so odd to me in my own experience. Like, it just feels so weird. So I am doing that to him and that’s not really fair because he’s like a real person and I’m sitting there going like, ‘hi Leo’ I’m like, I’m still 12 years old. But, but yeah, no, I think there’s something about that moment. The fact that it, I guess it was really, even more than that. It was the fact that it was someone that I had grown up watching and that I admired so much. And like as an actor, I think he’s fantastic. And I’d watched him in everything. And then that moment where it’s like kind of a, it’s just a, such a surreal moment as an actor anyway. So it just compounded it. And I don’t know, it’s it still feels like it, it didn’t really, occur because, because it was him there.”