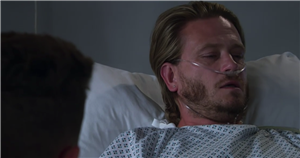 Emmerdale was full of drama on Monday as Victoria Sugden confessed her feelings for David Metcalfe before he woke up after being shot by Russ last week.

Only recently, David was shot by Russ as he attempted to save Victoria and Wendy Posner from a hostage situation in The Hide and the village's residents had been worrying about his fate as he recovered in hospital.

During Monday's instalment, Victoria, who kissed David last month despite the fact he is in a relationship with evil nurse Meena Jutla, confessed her feelings.

She said: "David just open you eyes for me, even if just for a second. You know, after everything that happened with Lee and Luke, I never thought I'd be able to trust anyone again. Never mind actually falling for someone… 'But it's different now, when it's just me and you, and we're alone, it feels right. I wanted to ask you something about yesterday, when you were on the floor and I was trying to keep you awake. Remember?

"Well, you said you wished for something. What was it David, what was it you wished for? It has been going over and over in my brain. I think something to do with me… I think you feel the same way as I do…'

To which David then started to blink his eyes as he woke up following the horrific shooting last week and left his loved ones delighted over his recovery.

However, Victoria was overheard by Jacob Gallagher as he warned his father to not "be stupid" and decide what he "really wants".

He said: "Every time you put yourself between two women and never know who to choose. You need to decide what you really want!"

It comes as Emmerdale star Matthew Wolfenden teased that there will be four huge stunts involving Meena in upcoming scenes.

Talking on Monday's Loose Women, Matthew, 41, who plays David, revealed that he has been left covered in "bruises and cuts" following the explosive filming.

Only recently on the ITV soap, Meena (Paige Sandhu) murdered Leanna Cavanagh, with her death ruled as "accidental" by police, and the evil nurse has been secretly terrorising her boyfriend David and those closest to him ever since.

Teasing upcoming storylines, he said: "David does recover and then we have a huge week coming up, which we're filming at the moment, which has something to do with Meena, that's all I can say."

Asked to elaborate by the Loose Women panellists, Matthew teased: "There's four big stunts that happen over that week. We’ve just been filming that over the last month, and over the week that it’s going to be onscreen there’s four huge stunts.

And due to the Emmerdale village's new serial killer Meena, Matthew joked that none of the cast want to be killed off.

He quipped: "We’re all very polite to the boss because we never know who’s going to be killed off next!"

Emmerdale continues on weekdays at 7pm on ITV.

For all your updates on Emmerdale and juicy spoilers, sign up to our daily OK! newsletter.