Of all the singers we were predicting to inevitably beat the UK at the Eurovision Song Contest this weekend, we weren’t expecting to be bested by a Chicken Lady.

But that may well happen, if Tuesday’s (May 8) semi-final was any indication! The contestant in question is Israel’s Netta, whose song ‘Toy’ might be the most unusual choice since the Russian grannies.

We should have guessed we were in for something special when Netta got an extremely unusual introduction from Rylan Clark-Neal during BBC Four’s coverage.

And he wasn’t kidding! What followed was a solid three minutes of chicken clucking, dancing cats and oddly catchy gibberish. Have a look above!

It’s safe to say that a star has been born:

Okay, so aside from clucking, what’s this Netta all about? Rylan shared during the BBC feed that the 25-year-old singer and looping wiz actually has a pretty impressive resume.

“She actually won the Rising Star show over there. That’s one of their biggest talent shows on telly,” he told viewers. “She says she’s ambitious, she’s determined and she’s got an extensive background in music. Now, there’s a lot of buzz about this, it’s an unusual song. Quite a memorable performance!” 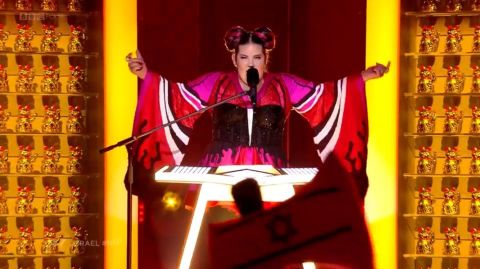 His co-host Scott Mills was caught up in the hype too, laughing: “People are living for the Chicken Lady!”

Hopefully, someone in the UK contingent is advising SuRie to incorporate the Funky Chicken into her routine on Saturday night!

Netta ended the night with the fantastic news that she’s been passed through to Sunday’s finale along with the Czech Republic, Austria, Cyprus, Estonia, Bulgaria, Albania, Lithuania, Ireland and Finland’s entrant Saara Aalto (of X Factor fame). Anyone feel like a KFC to celebrate?