It has taken 55 years for Marvel to finally make a movie about its first comic book “superheroine” character, The Wasp, and Evangeline Lilly wasn’t going to leave anything to chance.

The actress best-known for the TV series Lost and The Hobbit films acknowledges with a giggle that she worked closely with costume designers to find the perfect suit for the female founding member of the Avengers, who first appeared in a comic book in 1963.

“My butt was very flat in that first suit they made and I have a good bum, so I really needed to honour that!” she says jokingly before adding, a little more earnestly: “Sometimes I think female costumes can be all about the curves and the male costumes are all about the muscles, but I wanted her shoulders to appear more muscular and her abs to be more prominent to represent that she’s not just curvaceous but strong.”

Lilly appeared in the 2015 origin film Ant-Man as wannabe superheroine Hope van Dyne opposite Paul Rudd and says she was excited when the movie ended with the post-credits reveal of her character being presented with The Wasp suit, hinting at a full debut in Marvel’s 2016 release Captain America: Civil War alongside Ant-Man and the other Avengers.

“But then I got a call saying, ‘We’ve decided not to put you in Civil War’,” the 38-year-old says. “There was this moment where I felt devastated and their feeling was like, ‘I’m sorry, don’t be offended’ but then they explained, ‘We really want to dedicate a film to introducing this female superhero and we don’t want her just to be a side note'.”

Kevin Feige, the president of Disney-owned Marvel Studios, was more direct at a recent press day in Pasadena, where he sat surrounded by movie posters prominently featuring Ant-Man (Paul Rudd) and The Wasp (Lilly) with equal billing. “It’s about damn time,” he declared. “We always knew the next film would be called Ant-Man and The Wasp because it’s finally time to see her suit up and be the hero she said she wanted to be in the first film.” 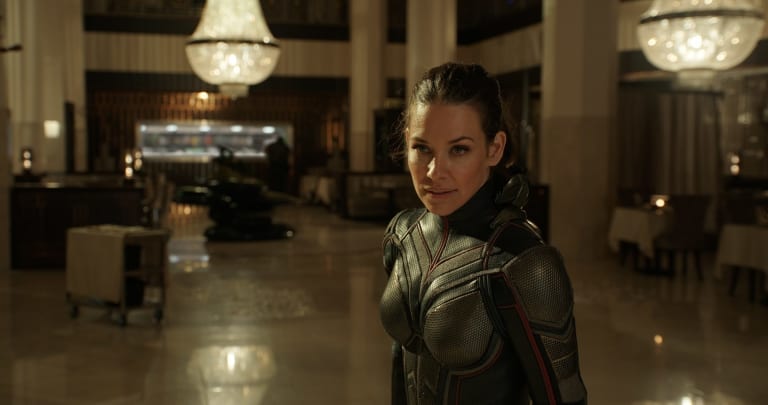 Evangeline Lilly stars as Hope van Dyne, aka The Wasp, in Ant-Man and the Wasp.

The superhero Ant-Man was created by Dr Hank Pym (Michael Douglas) when he discovered a particle that allowed Scott Lang (Paul Rudd) to alter his size and possess super-human strength. In the new film we find Lang, in the aftermath of the events of Captain America: Civil War, struggling to balance being a father with his responsibilities as a super-hero when he’s approached by Pym and his daughter Hope (Lilly) to don the suit again and fight alongside her as The Wasp to tackle a new mission.

“I think the cool thing about this Marvel Universe is that it allows for different types of heroes,” director Peyton Reed says of introducing the first Marvel superheroine. “In the context of all the other movies, this is also a little more intimate with a lot of father-daughter relationship stuff, so while Paul Rudd was one of the writers, we also made sure Evangeline was heavily involved because it’s absolutely her mission and in many ways she drives the story.”

Rudd has no problem with sharing the limelight and gushes about what he describes as the pair’s Moonlighting chemistry (a reference to the Bruce Willis-Cybill Shepherd 1980s TV detective show). “I love that in the MCU [Marvel Comics Universe] there’s a team and we’re it,” he says.

Lilly says that with this role her costume did much of the work. 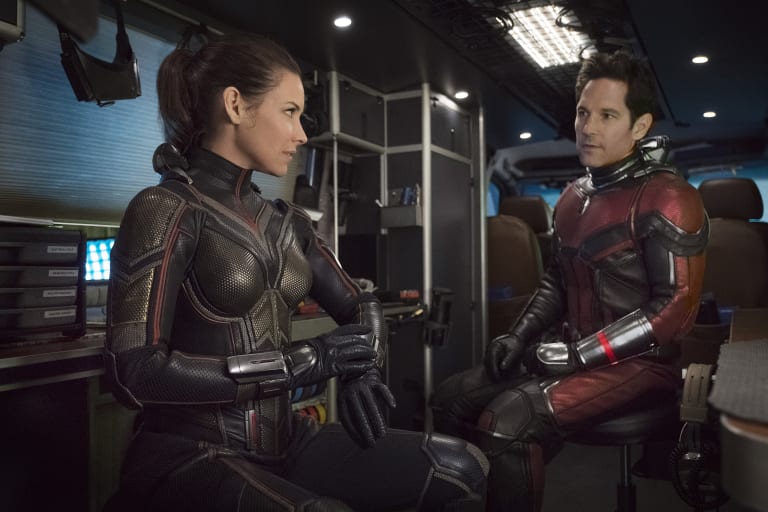 Paul Rudd (Ant-Man) says he and Lilly have some of the old Moonlighting chemistry on screen.

“I did feel sexy in my suit but more importantly, I felt incredibly powerful,” she says. “Becoming a superhero is a bizarre ask of any human being because none of us are really superheroes, so how does she walk and talk and think and behave? All of those questions are immediately answered the minute that suit fit like a glove. Being a superhero just oozed into my pores.”

In a welcome addition to the gender-busting movies of late, this blockbuster has three pivotal female roles, with Lilly being joined by Michele Pfeiffer and newcomer Hannah John-Kamen.

Pfeiffer, who played Cat Woman in the 1992 film Batman Returns, was excited and surprised to be back in that world as a mysterious former superheroine.

“People are learning that women can kick ass and studio people who green light films are learning that the public likes to see women in these kinds of parts,” the 60-year-old says. “I never expected to be back in this world, but I love that I am doing this at my age and that’s able to send a message that we are powerful at all ages throughout our lives.”

Ant-Man and The Wasp is on general release