‘F Is For Family’ Season 4 Takes a Hard Look at Bad Dads, Just in Time for Father’s Day

Despite a proliferation of “timely” TV these days, no one would be so bold as to bestow “F Is For Family” with the popular descriptor. Created by Michael Price and Bill Burr — the latter of whom also voices the lead character, Frank Murphy — Netflix’s adult, animated sitcom follows a lower-middle class family struggling to make the best of it in 1970s America. The Murphys are white, racism and misogyny run rampant in their daily lives, and most of the ongoing story circles around Frank, a member of middle-management at a failing airline and father of three, going on four, children.

Frank alternates between a lifelong Rodney Dangerfield bit (“Why can’t I get no respect?!”) and answering his own question through bad, embarrassing behavior. But “F Is For Family” doesn’t glorify any of Frank’s antics; it ruthlessly examines his tortured growth. Its satire is pointed directly at its central figure, studying Frank’s ever-increasing state of frustration, as his inability to become a better husband and father sets him off time and time again. His near-constant shouting, threats, and cursing extends to everyone around him, most often his wife and adolescent kids, even when he’s obviously in the wrong — whether you’re judging by today’s stricter parental standards or the ’70s more tolerant household norms.

Season 4 digs deeper into Frank than past entries through the arrival of his father, William (voiced by Jonathan Banks), which brings us back to the that pesky word. No, it’s not timely, but it is well-timed: The new season of “F Is For Family” arrived one week before Father’s Day, allowing viewers to process and prepare a conversation for Sunday, hopefully in a healthier way than ol’ Frank here. Season 4 could work as a cathartic experience for anyone unready or unable to confront their bad dads, but more than anything, it’s a strong illustration of how behavior can be passed down from one generation to the next — whether you want it or not.

When we meet William Murphy at the start of the season, he’s surrounded by an aura of fear and revulsion. Frank hasn’t seen his father in almost two decades, after his mother threw William out of the house for repeated physical and emotional abuse of their family. Flashbacks show William shoving an ice cream cone in a Frank’s adolescent face, smearing it across his eyes as the boy cries. In public, he’s the nicest guy in town. In private, his sense of entitlement clashes with his reality, leading to violent outbursts and profanity-laced tirades. Later, he beats Frank with a pair of crutches, upset over a failed business venture. (He tried to make money selling supplies to polio victims.)

When Frank’s mother runs into the room to stop her husband from hitting their son, she shouts: “What kind of a man takes his failures out on his son?” “Every man in America,” William replies. 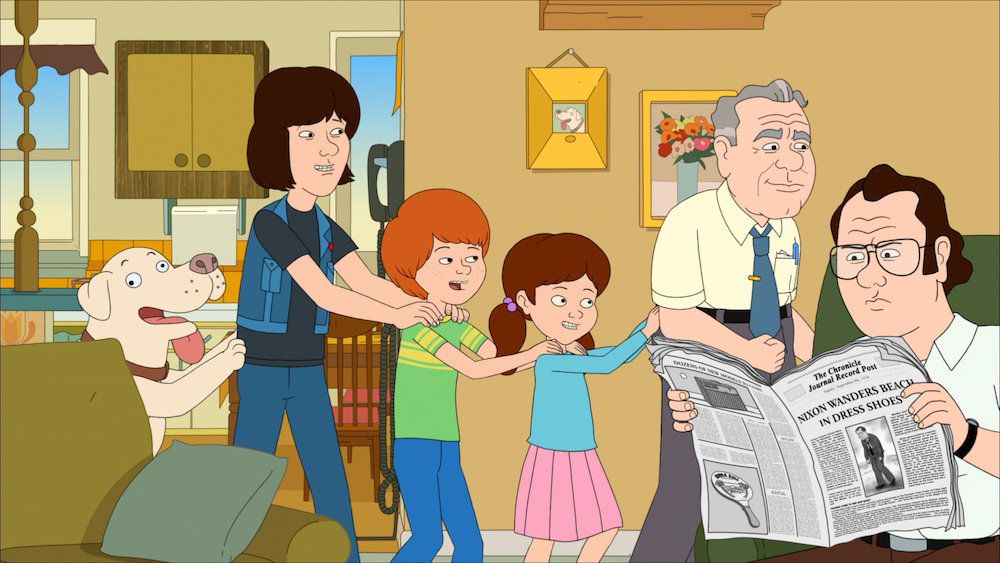 “F Is For Family”

Sans context, it’s a powerful statement, but it’s one we’ve seen Frank grow into over the past few seasons. Frank lashes out at his kids when he’s anxious about money or embarrassed about his own behavior. But those bad habits are exacerbated by William’s arrival. You see, William the grandfather is much more amiable than William the father. His public face securely in place, William takes his grandkids out for ice cream and watches in angelic silence as Frank becomes the bad guy. His long-held anger spilling out, Frank slams his fists on the table, screams at his family, and, eventually, resorts to violence.

But Frank doesn’t hit his son; he hits his father. “F Is For Family” makes it clear that what Frank hates the most about his dad is what he now sees in himself. Despite separating from his dad before his own kids came around — and harboring hatred toward his father for what he did to little Frank — big Frank inherits many of the same traits. They’re both angry. They both think the world owes them something. They both see themselves as failures, but they aren’t ready to admit it. Even during their fleeting moments of friendship, it’s clear they’re bad influences on each other. (Frank drives drunk with his dad in the passenger seat, or they bond over mocking women for their emotions.) If a grown Frank has to bend to his father’s identity in order for the two to get along, just think of what a young, formative Frank had to endure to make a few “happy” memories.

It’s difficult for anyone to individualize themselves from their parents, but for someone like Frank — whose worldview was shaped through anger and violence — it’s even more challenging, especially during a period of history when a man’s authoritative role in the household was unchecked. Set in a time when white men felt they should be handed the American dream on a platter (oh wait — a lot of this still applies today), “F Is For Family” presents a portrait of two who were denied their firmly believed birthright. 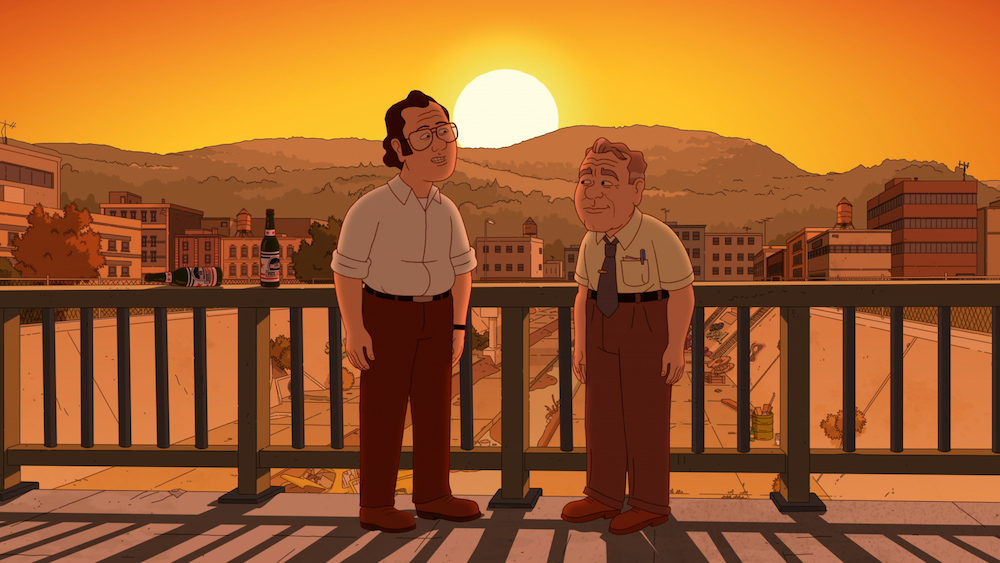 “F Is For Family”

But unlike William, Frank tries to meet a higher standard; he knows his impulses can steer him down a dark, lonely road, and he clings to his family like a life-preserver (when he’s blinded by fury). He tries everything he can, first to convince himself he’s not his father. Frank tries to expose his family to the private, monstrous version of William, hoping it will make him look all the more wholesome. Then Frank tries to ignore his dad, resolving to be a better parent without doing the work to change. Soon, he’s trying to get along with William, but, just like when he was a kid, it’s only a matter of time until something riles his dear old dad. Eventually, they have it out, and that’s when Frank hits his father.

Frank should be too mature to go around punching people, let alone the frail grandfather everyone else sees come crashing to the floor. But Frank doesn’t see a frail old man. He sees the domineering tyrant who scared him half to death as a kid. Shouldn’t he get to hit back? It’s an evocative question, but the series provides a swift response, pushing Frank to the end of his rope and forcing him to come to terms with his relationship to his father and what it means to his relationships at home.

Progress is slow, for Frank and many like him, but they are trying to be better men, better husbands, and better fathers. Haunted by their past and ashamed how it’s shaped who they’ve become, they’re still determined to find peace. “F Is For Family” may present an extreme example of continuing growth through adulthood and children’s learned traits from their parents, but it’s nonetheless an effective lesson for today’s dads. Maybe you want to be just like your dad. Maybe you want to be nothing like him. Either way, there are parts of the past that are bound to seep through into the present, and identifying them is a positive step, whether it’s an attribute or a curse.

So pick up the phone and talk to your dad this Sunday. Ask him whatever you’ve been too shy, too scared, or too distracted to ask already. At some point, he’s probably told you: “If we don’t learn from history, we’re doomed to repeat it.” But if we want American men to be better, we’ll have to look deep within ourselves. As our country’s painful past collides with present-day protests over a safer nation, now is the time to start digging. The sins of the father do not have to be the sins of the son.

Shit, maybe this is timely.

“F Is For Family” is streaming now on Netflix.