I’ve aged about ten years watching Peter Weber’s season of The Bachelor, but it’ll all be over in just a few nights. And thanks to Reality Steve we already know what happens: Peter is (according to spoilers!) going to propose to Hannah Ann and then break up with her before pursuing Madison—and it seems pretty likely that the footage of him tearfully apologizing to someone is said breakup going down.

What’s still not known? When this breakup took place IRL—but Bachelor Nation may have figured it out based on—wait for it—the length of Peter’s freakin’ hair.

Basically, Peter has a fresh new haircut in the scene where he’s presumed to be breaking up with Hannah Ann. And if you go through old press appearances, you can clearly see he didn’t have said haircut in January. However, he popped up with it at the beginning of February while giving an interview to Entertainment Tonight’s Bachelor expert Lauren Zima—who also happens to be Chris Harrison’s girlfriend. 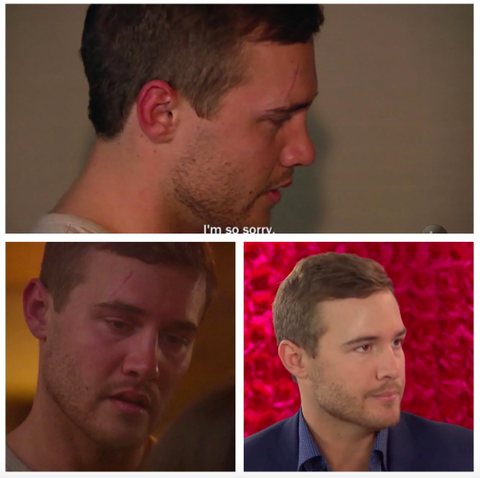 Meaning Peter and Hannah Ann presumably ended their relationship at the beginning of February, and he and Madison have been giving things a try for just over a month?

Again, this is just a theory based on a literal haircut, but a) it kinda seems to check out, and b) I’m obsessed with the fandom’s commitment to sleuthing. Lea Michele Fired by HelloFresh, Issues Apology for Past Racism
We and our partners use cookies on this site to improve our service, perform analytics, personalize advertising, measure advertising performance, and remember website preferences.Ok