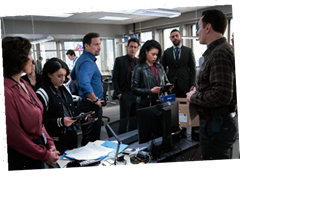 CBS is tripling down on its commitment to the FBI franchise, renewing the mothership series (for Season 4) and spinoff FBI: Most Wanted (for Season 3). Additionally, the network has handed an official series order to a second offshoot, FBI: International.


FBI: International, which was put into development earlier this year, will debut next season in a crossover episode of FBI and FBI: Most Wanted.

“FBI is the fastest growing brand on television and our partner Dick Wolf has found yet another creative way to expand its universe,” declared CBS president Kelly Kahl in a statement. “FBI: International is an intriguing and distinct drama that perfectly complements its compelling siblings, FBI and FBI: Most Wanted, creating an enviable triple-threat for next season that will fit seamlessly across our network lineup.”

As previously reported, FBI: International follows a group of elite agents from — you guessed it — the FBI’s International division as they travel the world with the mission of protecting Americans wherever they may be. Chicago Fire EP Derek Haas — who briefly served as co-showrunner of FBI — will serve as showrunner.

TVLine’s 2021 Renewal Scorecard has been updated to reflect the pickups of FBI and FBI: Most Wanted.