Fear the Walking Dead Recap: Divided We Fall — Plus, Victor Gets 'Stranded'

In Sunday’s Fear the Walking Dead, Strand did what Virginia believed was impossible, in so doing earning himself a reward that looked an awful lot like a punishment. Read on, and I’ll explain why. 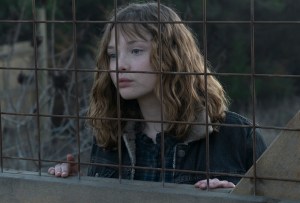 ‘YOU AND I ARE NEVER GONNA CLEAN ANOTHER LATRINE AGAIN’ | As “Welcome to the Club” began, a group of prisoners in numbered jumpers was led into a sugar-processing plant and tasked by Ginny’s Rangers — at gunpoint, natch — to dispatch the horde of walkers trapped behind a door. All of them — the survivors, that is, not the walkers — had disobeyed Virginia and therefore deserved to be in the grave; this, the head baddie explained, was their chance to dig themselves out. But the door jammed, molasses oozed out, and one by one, the Rangers and the prisoners all got dragged to their sugary deaths, all except for prisoner No. 41, Sanjay. After the opening credits rolled, Strand and Alicia, apparently on latrine duty outside of Lawton (Fear’s answer to Woodbury?), got into it with Ranger Marcus — to the point that Virginia’s teenage sister Dakota (new cast member Zoe Colletti) was moved to intervene on their behalf.

Of course, Strand and Alicia still landed in hot water, so they were ushered into Virginia’s office, where they interrupted the haircut that she was receiving from Daniel, who… whaaat? Didn’t recognize his friends at all. “His memory’s like a card catalog,” Ginny explained, “but the cards are all mixed up” since he tried too hard to keep Skidmark with him, and things got ugly. (Not my Skidmark! Ginny, you bastard!) As for the duo’s punishment, Virginia was going to send them “somewhere that better suits your natural talents” — in other words, the sugar-processing plant. Before they were driven there, Strand expressed his pity for Daniel. “You told me to remember who I was in here,” said Victor. “You can’t even do the same.” In response, the barber gave Strand his St. Christopher medal to ease the heavy burden that he seemed to be carrying. 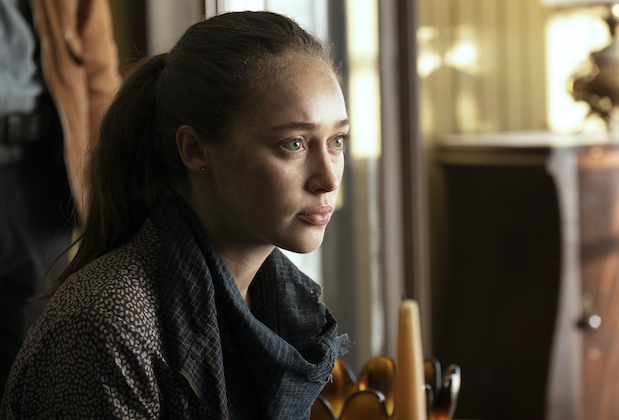 ‘HOPE YOU’RE STILL BREATHING WHEN I GET BACK’ | At the plant, Alicia and Strand were reunited with Charlie, who was being punished for trying to run away, and Janice. What had she done? The better question, she said, was “what did they catch me doing?” In no time, Strand decided that they were going to take over the place. But that was going to be tough to do when the walkers were coated in syrup like Homer Simpson’s sweetest dream and worst nightmare, the Rangers had guns, and though there were more prisoners than Rangers, they had only spears and s–t. Also, one of the prisoners was Sanjay, who admitted that when the massacre went down, “I was just the a–hole that watched.” Definitely B-team material. As Strand and Alicia were discussing their plan and whether to abort, they discovered that they’d not only gotten a delivery of pointy objects, they’d gotten a stowaway — Dakota, who revealed not only her tie to Virginia but that she was most definitely not a fan of her sib.

The teenager was, however, a fan of Strand and Alicia’s. She’d seen their old tapes; that was why she was sure they’d help her escape from Lawton. And at Virginia’s, she’d overheard everything, about the weapon at the plant that the Pioneers’ leader wanted so badly, the deal that Victor had cut with Ginny — everything. Deal? asked Alicia. The one in which Victor gave their nemesis the SWAT van in exchange for not being separated from Madison’s daughter. “Daniel told me to remember who I was,” he reiterated to Alicia. Well, being with her helped him do that, to remain someone in whose eye he could look. Hard to be mad at a reason like that. Sooo it was agreed that they’d clear the walkers, get the weapon and use it against Ginny. Easy peasy. Only it turned out there was a full-blown horde behind that door, and before you could say “change of plans,” things had started going south. 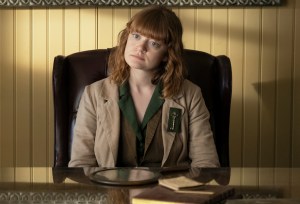 ‘THEY’LL CHOOSE FRESH MEAT EVERY TIME’ | Sanjay, as he was wont to do, froze, Charlie got yanked backwards by her ponytail and nearly bitten — Dakota leapt into the fray to save her, thank goodness — and soon, the Rangers were all being ripped limb from limb. (No big loss, that.) When Strand ran outside to honk a horn and lure away the walkers, he found Sanjay hiding in the van. Since the zombies wanted nibbles, not noise, Strand reverted to his old ways and — whoa — stabbed Sanjay, using him as live bait to distract the walkers long enough for Janice and Alicia to get the Rangers’ guns. “You said you wished you had the guts to stand up to [the Rangers],” Strand said to his victim before anyone was around. Well, “today’s your day to be a hero.” And also dinner. “I tried to stop him,” Victor lied to his friends, “but this is what he wanted. He did this for us.”

At any rate, the group now had access to the mystery weapon, which… didn’t actually exist! Dakota hadn’t made it up, she just hadn’t known there was no actual weapon. “The thing I’m looking for ain’t here,” Virginia told Strand when she arrived. “It’s you, a true leader. You are the key.” With that, she presented him with a Pioneers key — he was now an official Scout — and informed him that he’d just formed an army. He could do with it whatever he wanted, but come time for “the big show… y’all best be ready.” Whatever “the big show” was. As the episode neared its conclusion, Charlie tried to jog Daniel’s memory with the Traveling Wilburys — to no avail. Afterwards, Alicia learned that Strand was keeping Janice where she was, on laundry duty, while sending her away. He no longer wanted to remember who he was. He couldn’t. “To do all the things that I need to now, for all of us, I have to forget that person,” he told Alicia, “and I can’t do it with you by my side.” With that, he gave her the St. Christopher’s medal that is clearly going to be the season’s hot potato. 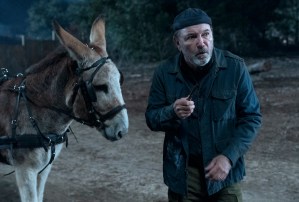 ‘YOU LOOK LIKE YOU COULD USE A HAIRCUT’ | In the hour’s final moments, Daniel waited until Ranger Hill had driven him outside the gates of Lawton (en route to Paradise Ridge) to “remember” that he’d left behind his best scissors. When the Ranger went back to retrieve them, the barber whistled… and someone whistled back — and killed an approaching walker. “Much obliged, friend, if in fact you are a friend,” said Daniel. Oh, it was a friend alright, it was Morgan! Not only that, but Daniel recognized him. “I thought it was you she was looking for,” said the barber, as sharp as his razor. So, what did you think of “Welcome to the Club”? Strand’s return to the dark side? Charlie’s near-miss? So far, I’m liking this season much better than last. You? Hit the comments.