There was a lot to talk about with Fear the Walking Dead‘s mid-season premiere, but one of the episode’s most terrifying moments was a literal attack of flying zombies. Eek!

Sunday’s opener, ‘People Like Us’, built up a torrent of bad weather that climaxed in the final scene with a literal zombie storm, where a swarm of flying walkers attacked the SWAT van. There’s a brief look in the trailer below:

This sequence was one of the show’s most ambitious ever, and cast member Jenna Elfman — who plays June (aka Naomi aka Laura) — got to watch the show’s stunt team film it from the eye of the storm.

Speaking to TV Guide, Elfman revealed that the actors playing the flying walkers “had harnesses on and were being pulled” as they were flung into the SWAT van to attack.

“That was crazy,” she remembered. “I was sitting inside the SWAT van with Maggie watching these walkers fly past and slam into the SWAT van right in front of our faces, these stunt people going through this. 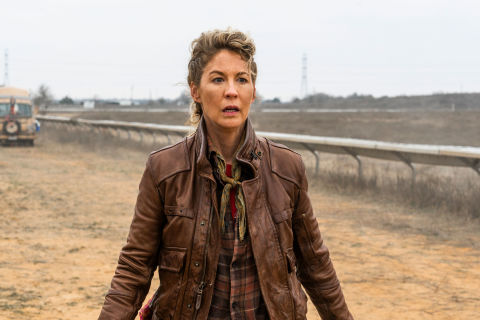 “They worked on that for a long time, figuring out how that was all gonna be. I actually have a fun little video that I’ll post at the right time which was my point of view from inside the SWAT van with these stunt people hitting the window and smashing against the car. Literally flying by the window. It was so real and so creepy in a fun way.”

Things are getting STORMY tonight on the return of @feartwd! Are you watching? Let me know your favorite moments below! ?‍♂️?‍♀️?‍♂️?‍♀️?‍♂️?‍♀️ #feartwd #twdfamily #ftwd #fearthewalkingdead

Things are getting STORMY tonight on the return of @feartwd! Are you watching? Let me know your favorite moments below! 🧟‍♂️🧟‍♀️🧟‍♂️🧟‍♀️🧟‍♂️🧟‍♀️ #feartwd #twdfamily #ftwd #fearthewalkingdead

Aside from that horrifying climactic sequence, ‘People Like Us’ once again opened the door to the possibility of Fear the Walking Dead crossing over with The Walking Dead. Fans will have to keep watching to find out if it comes to pass…

Fear the Walking Dead airs on AMC in the US and on AMC on BT TV in the UK.