Since Fear the Walking Dead only very recently reunited Dwight and Sherry, Sunday’s episode felt like a sucker punch. How dare the show make us care about the couple — and care that much — only to tear them apart again so soon? What could possibly prompt those two to step even an inch away from one another after all that they went through to be together? Read on, and you’ll get not only the answer to that question but find out why the hour ended with walkers that looked a lot like Dwight and Al. 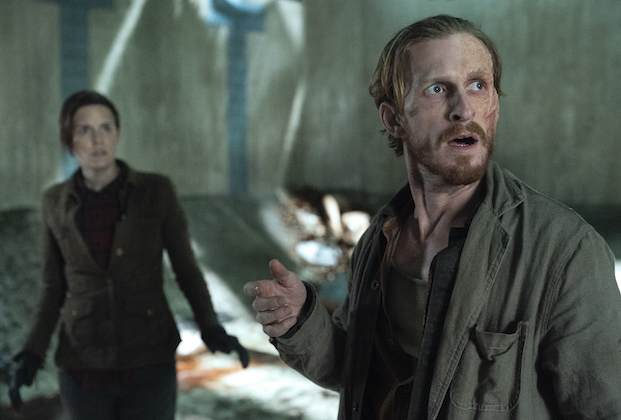 ‘I LOVE BREAKFAST FOR DINNER’ | As “Honey” began, Dwight and Sherry were about a week into their second honeymoon. As she reread the letters that she’d left for him across the miles, he reminded her, “You said you were sorry for turning me into the man that I was.” So, in hopes of giving her nothing to be sorry about anymore, he’d worked to transform himself back into the guy that he’d been before Negan and the Saviors. (Mission accomplished, as far as I’m concerned.) When Al didn’t check in with the Rangers via walkie-talkie on time, Dwight covered, spinning a yarn and insisting they needed a couple more days. In that time, he wanted to run away with Sherry, someplace Ginny would never find them. Sherry couldn’t do that, she said. Uh, why? When she left the room, Dwight heard noises. Next thing we knew, there was a masked man in the window, and Dwight had been captured and transported to a camp full of menacing types who looked like they’d just stepped out of The Strangers.

Turned out, Sherry was one of them — something she could’ve, you know, just told Dwight rather than let him get kidnapped, terrorized and held at gunpoint. Only, in her mind, she couldn’t have filled him in on her new alliance with Ginny’s outcasts, because she didn’t think that he’d want to be a part of their plan to bring her down. Now then, asked masked man No. 1 Oswald, where was Ginny going to be next? If Dwight didn’t tell him, he’d kill Al, who was also their prisoner, natch. Things got all super tense for a hot second, then in came a cooler head — the one affixed to Rollie, the henchman of Logan’s to whom Dwight gave a second chance way back when. Rollie defused the situation, then explained that they wanted to attack the SWAT van when it passed by. Quickly, Al pointed out that they couldn’t blow it up; it was built to sustain a blast. Besides, “you don’t destroy something like that,” she added, “you steal it.” Against all odds, the group managed to catch the SWAT van on horseback, with Dwight pulling some full-on Jason Bourne maneuvers to leap from his saddle onto the speeding MRAP. By the hardest, he got control of the vehicle, but… he lost the driver (whom he’d had to kick to the curb). And since the driver had seen Dwight’s face… Ruh-roh. 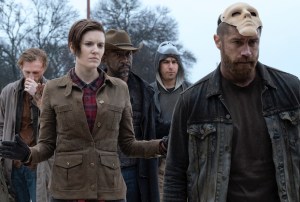 ‘YOU LOSE SOMETHING? ’CAUSE I THINK I FOUND IT’ | No, I take that back; it wasn’t “ruh-roh” at all, because shortly, coming down the road was Morgan, dragging the driver through the dirt behind his horse. After everyone caught up — and since Sherry didn’t seem to recognize Morgan, it’s safe to assume she wasn’t the person who saved him after he’d been shot by Ginny? — he floated the idea of everyone joining him at the awesome new place he’d found. Nah, said Oswald. Let’s unleash the SWAT van. Eh, maybe not. If they did that, Morgan noted, they’d be putting in jeopardy all of their loved ones that are still living under Ginny’s thumb. They just needed to get his utopia ready and wait for the right moment to move against Ginny. Later, Sherry made damn sure that Dwight knew where she stood. “I’m not leaving these people until Virginia’s dead,” she said. Fine, replied Dwight. Then they’d attack now, go with Sherry’s plan. He’d do anything not to be separated from her again.

To that end, Dwight held nothing back in questioning the driver about Virginia’s next stop. He even spattered him with blood and threatened to sick the group’s wolf dog on him. Ha, said the driver. Let him eat me, and you’ve got nothing. “Wrong,” Dwight retorted, “I got one happy dog.” Just as it started to look like the driver was going to be turned into kibble and bits, Morgan intervened, saving the Ranger’s ass and reminding Dwight of all the people he’d be putting at risk if he went through with Sherry’s plan. Hold out for the new place, it’ll be different, Morgan promised. But Dwight had heard that before. “Nothing’s gonna be different,” he predicted, “until Virginia’s gone.” And not for nothing, he added, but if it was Grace asking for Virginia’s head on a platter and not Sherry, Morgan would be 100-percent on board. 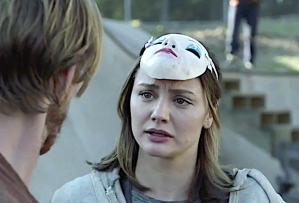 ‘I WON’T LET YOU BECOME THE PERSON YOU USED TO BE’ | Later, Sherry suggested that they didn’t need to find out where Virginia was going to be, they could just bring her to them. So Dwight walkie-talkied that he and Al had found a spot with more than 100 survivors and could really use Ginny to come by and make the first overture to them. At last, a plan was set in motion. Mind you, despite Sherry’s insistence on taking out Virginia now, now, now, she questioned Dwight’s seeming willingness to feed the driver to the dog and sideline Morgan and Al. “They are like my family,” he clarified, “you are my family.” So nothing would stop him from personally killing Ginny. Cue Sherry realizing that once again, she was turning Dwight into something that she didn’t want him to be in 3, 2…

Meanwhile, Al was explaining to Morgan that they could actually blow up the SWAT van if need be; she’d lied earlier. When the twosome were caught stealing dynamite, Rollie & Co. imprisoned them with the driver and, to Dwight’s surprise, Sherry had him thrown into lock-up, too. “I won’t let you become the person you used to be,” she told him. Alone with Al and Morgan — the driver never did wake up — Dwight admitted that he knew the time was wrong to go after Virginia. But he’d be damned if he’d let Sherry go through what he and Morgan had, losing and then finding themselves once more. So he freed himself — they all make it look so easy! — hustled to the rendezvous point at which Sherry hoped to use the SWAT van to gun down Ginny, and beseeched her not to go through with it, if only for the sake of all the people the Rangers could hurt in retaliation. In the end, Sherry didn’t pull the trigger — lever, really — but she wasn’t happy about it. “You had to make it hard!” she screamed at Dwight, beating on him.

‘I NEED THIS — THERE’S THE TRUTH’ | Back at their hideout, Dwight asked Sherry what Ginny had done to her. “It’s not about Ginny,” she replied. It was about Negan — she could’ve done something a hundred times while she was his “wife” and never did. Still, Dwight refused to let them be turned into people that they aren’t again. “Then you need to leave,” she said. She was going to kill Ginny come hell or high water. “That’s who I am.” He, on the other hand, actually managed to remind her of who he used to be. As he left the camp, he stopped by the wolf dog’s pen and set free his new four-legged friend. Later, Morgan and Al reported to Dwight that Sherry & Co. had taken off with their hostage. Dwight should come with them, they said. So they dressed up a couple of walkers in Dwight and Al drag (so as to convince the Rangers that they were dead), and led Nora and the formerly plague-infected folks to their magical new home. And, of course, Dwight drew an eternity symbol and an arrow so that Sherry could find him again.

So, what did you think of “Honey”? Could you believe Dwight and Sherry let each other go again? I hated to see them split up but understood, when she said that it wasn’t really about Ginny but Negan. Anyway, hit the comments.