'Friends' Reunion: The Most Nostalgic Moments Longtime Fans Will Love

Spoiler alert! Major spoilers ahead for Friends: The Reunion. Don’t worry, we’ll be there for you after you watch!

The bridge of the iconic Friends theme song, “I’ll Be There for You” by The Rembrandts, includes a line that has seemed to define the stars of the beloved sitcom, and the unbreakable bond they forged throughout their years in the Must See TV mega spotlight: “Seems you’re the only one who knows what it’s like to be me.”

In Friends: The Reunion, the new streaming special on HBO Max, the cast — Jennifer Aniston, Courteney Cox, Lisa Kudrow, David Schwimmer, Matthew Perry and Matt LeBlanc — reunites for the first (and supposedly last) time publicly since their final episode aired back in 2004, reconnecting on their old soundstage and the sets they called their TV home for 10 seasons.

The reunion special is a welcome addition to any die-hard Friends fan’s canon, and it’s at its best when giving viewers insight into the stars themselves, how they remember the show, how they were inextricably bonded by those years on the Central Perk couch, and what they’re willing to share now that was perhaps kept under wraps back then.

“No one was going through what we were going though, outside of the other five,” Schwimmer says as the group sits in Monica’s apartment, looking back on the 236 episodes that changed their lives forever.

“There’s no shoulders [to lean on] outside of this group,” Aniston agrees.

From never-before-seen shots of the cast behind the scenes, to surprise appearances from beloved guest stars, the special has something for every kind of Friends fan. And even longtime lovers of the series, who have scoured their DVD box set for every available bonus feature, will find something new in Friends: The Reunion, reaffirming its place as one of the greatest sitcoms of all time.

Here’s a look back at some of the most heartwarming nostalgic moments from the two-hour special:

The One Where They All Walk Onto the Old Stage

Kudos to the producer who came up with the idea to have the cast enter their old soundstage — Stage 24, on the Warner Bros. lot in Burbank, California — one by one, taking in the sets that were their TV home for 10 years. It’s a nostalgic gut punch to kick off the special, and leads to some sweet introductory moments between the cast. By the time Cox arrives and asks Aniston, “Did you cry too?,” viewers can also answer in the affirmative. 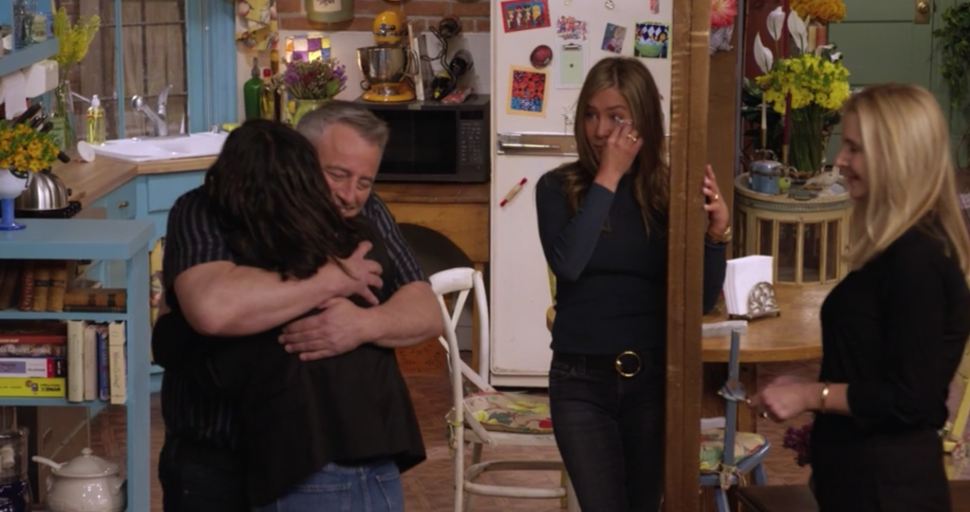 The One With the Opening Credits… and That Dang Fountain

Cutting modern-day shots from the special in with the memorable opening credits footage of the cast frolicking in the Warner Bros. lot fountain — which is also the backdrop of the cast’s sit-down with James Corden — was a sweet idea, but it’s the ending montage of the special, featuring unseen footage from that soaked season 1 romp, that will really thrill fans.

The extended cut — set to an orchestral version of the theme song — showcases some sweet, candid shots of the cast, including what happened at the end, when they were all wrapped in towels and helped out of the chilly water! 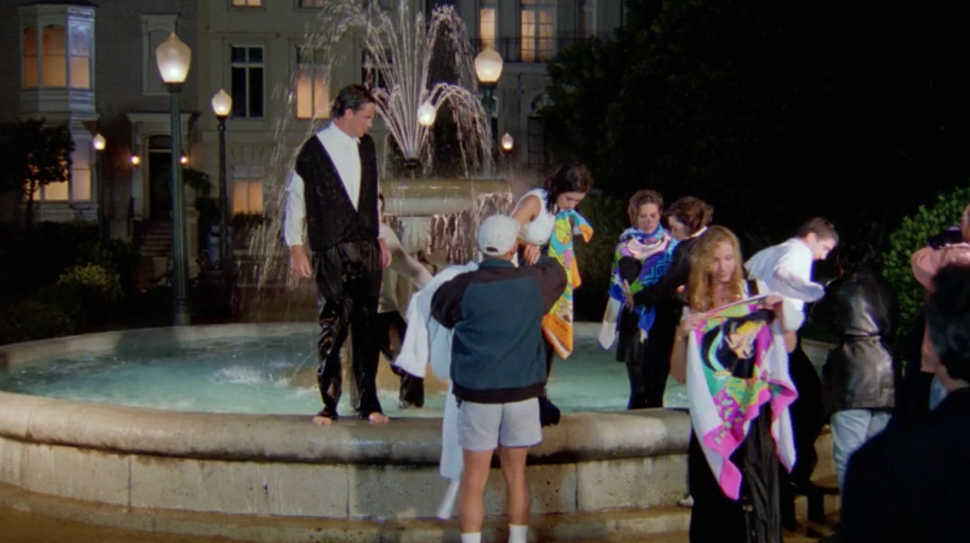 The One Where Matt and Matthew Sit in Their Chairs

Returning to their old apartment, Perry and LeBlanc waste no time recreating one of their silliest physical comedy bits of the entire series, kicking back in their Barcaloungers, with exaggerated groans of satisfaction.

The sweet Chandler and Joey callback seems to be just as exciting for their co-stars, as Kudrow excitedly notices, “They’re sitting in their chairs!” 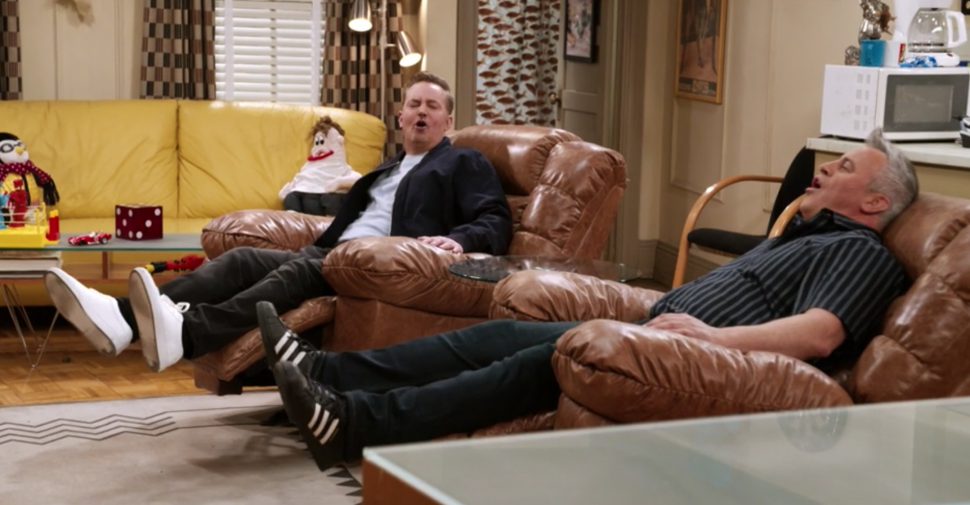 The One Where They Spent Every Day Together

As the old friends tour their dressing rooms and the backstage area of Stage 24, Kudrow confirms that she, Cox and Aniston ate lunch together every day while filming the show. But the cast’s bond went deeper than that, especially in the early seasons.

“The first couple of years, we ate every meal together,” Schwimmer recalls. “Even on the weekends!”

“We also watched every show together,” Aniston adds, and Perry agrees: “We were inseparable.”

The One Where They Recreate the Trivia Game

Fans were thrilled when the Friends: The Reunion trailer previewed the cast replaying the notorious trivia game from the season 4 episode, “The One With the Embryos” — which Cox notes is one of her all-time favorites. And the game is just as enjoyable as you’d hope, with surprise returns from Tom Selleck, who played Monica’s beau, Richard, Larry Hankin as the girls’ grouchy downstairs neighbor, Mr. Heckles, and Thomas Lennon as Joey’s “hand twin.”

What’s really fun is to watch, though, is when the cast’s characters start to bleed through as they play. Aniston incorrectly blurts “transponster!” right on cue, and when Cox repeats a category choice with a touch of Monica’s hyper-competitive energy, her co-star laughs, “Louder, Court!” 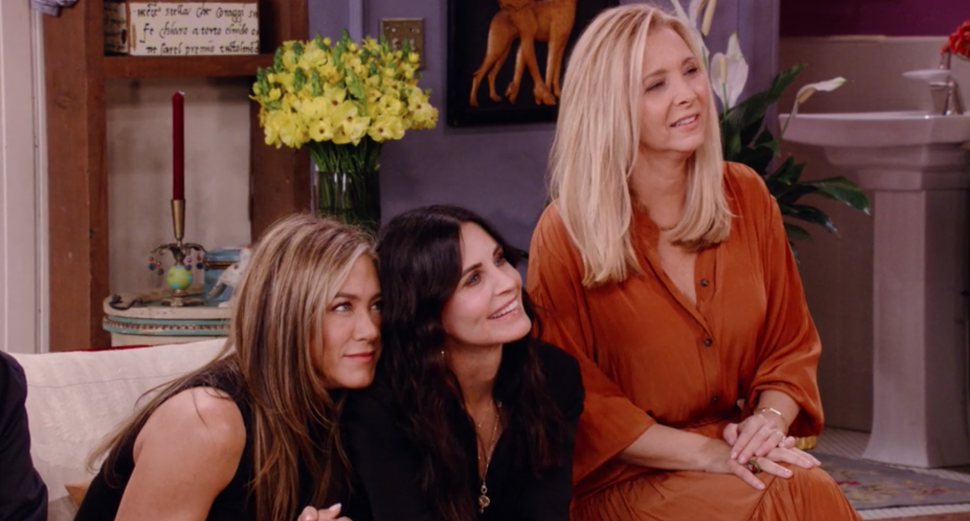 The One With the Table Reads

The most intimate moments of the special come when the cast gathers at a roundtable to read some of the scenes from fans’ favorite episodes. LeBlanc, Cox and Perry get to relive the pitch-perfect comedic timing of the infamous jellyfish reveal, Kudrow brings the house down replaying Phoebe’s freak out from “The One Where Everyone Finds Out,” and Aniston and Schwimmer step back in time to recreate Ross and Rachel’s first kiss scene from “The One Where Ross Finds Out.” 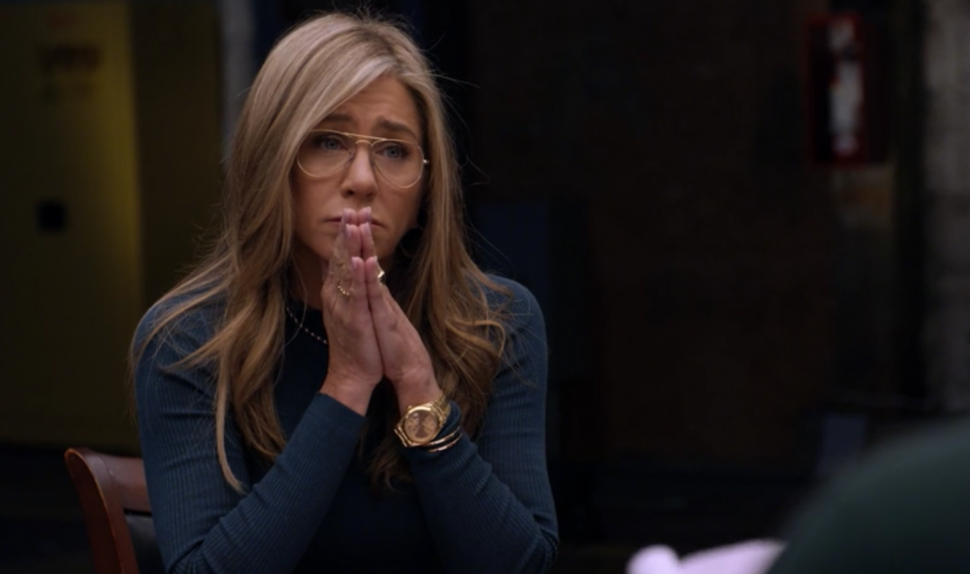 Intercut with clips from the actual episodes, these moments are a lovely way to remember that one of the things that makes the show so beloved and enduring is the comedic chemistry between all six cast members. And speaking of that…

The One Where Ross and Rachel Were Actually in Love (?!!)

In a bombshell that will send some shippers reeling, Aniston and Schwimmer cop to the fact that Rachel and Ross’ romance was bolstered by some real-life feelings between the two during the show’s early seasons.

“At some point, we were both crushing hard on each other,” Schwimmer shares. “But it was like two ships passing, because one of us was always in a relationship. So and we never crossed that boundary. We respected that.”

In fact, it seems the only romantic resolution the pair ever got was onscreen. “We just channeled all of our adoration and love for each other into Ross and Rachel,” Aniston insists.

“I remember saying one time to David, ‘It’s gonna be such a bummer if the first time you and I actually kiss is gonna be on national television,'” she adds. “Sure enough, first time we kissed was in that coffee shop.”

This is the history lesson I didn’t know I needed. 🥺

The One Where Ross and Monica’s Parents Surprise Them

The interview portion of the special with Corden features a handful of questions from the audience, but none is quite so poignant as when the camera cuts to Christina Pickles and Elliott Gould, who played Monica and Ross’ parents, Jack and Judy Geller, throughout the show’s 10-season run. 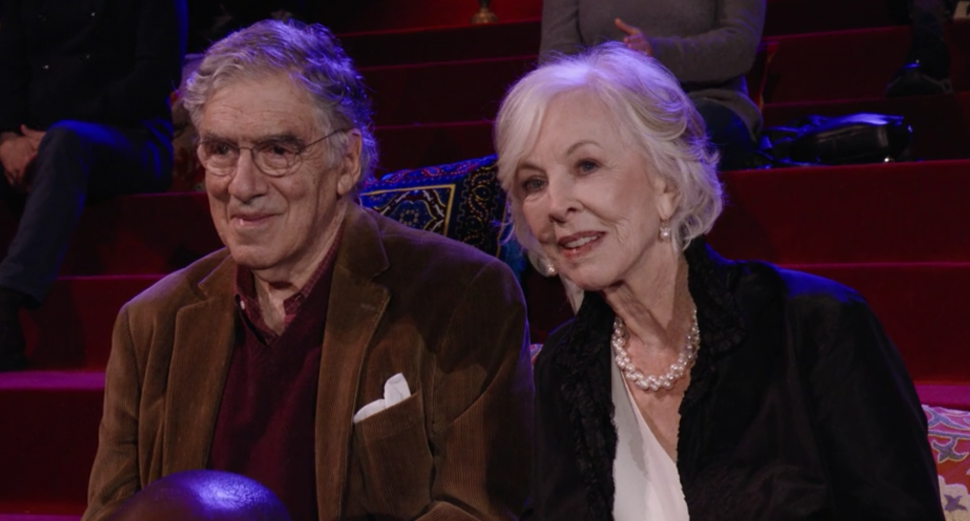 The reveal thrills even the cast, who emotionally applaud the acting icons as they share their memories of working with the six “down to earth” stars.

“They were awfully nice to us, ” Pickles sweetly recalls. “One day, we came to work and they said, ‘The parents are here!’ and it was so moving, We really did feel like their parents and in fact, we used to worry about them quite a lot. Elliott said, ‘We’re behaving like we’re really their parents.’ And we did. They were so sweet.”

The One With the Huddle

One of the rituals the cast had every week while the show was in production was a last-minute huddle, where they came together for one last moment before filming began. It became something of a superstition among the six, especially after the one episode they didn’t do it — during the filming of the iconic bottle episode “The One Where No One’s Ready” — ended in disaster, with Matt LeBlanc dislocating his shoulder as he jumped over the coffee table to get away from Chandler.

“It was early on,” Kudrow remembers as the group calls back the day, rewatching the gruesome footage of the injury and expressing their disbelief that they didn’t huddle up that day. 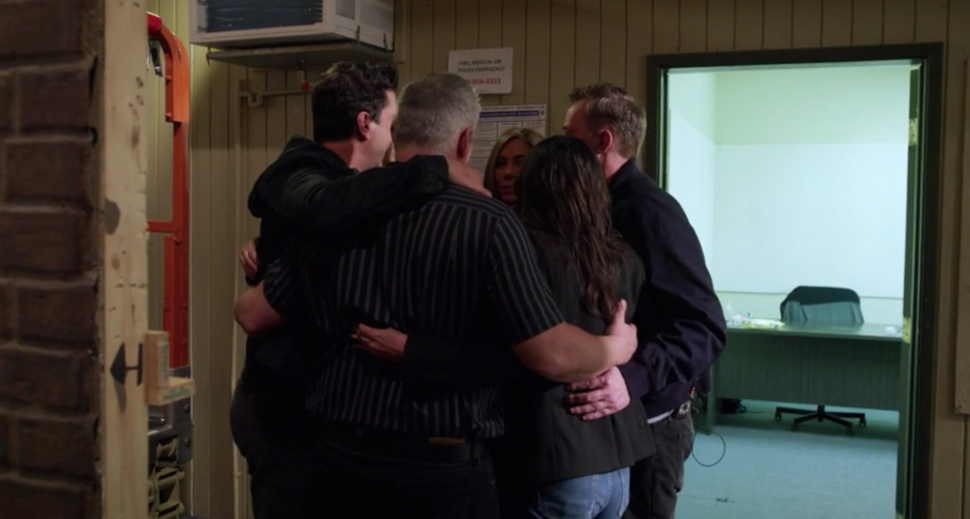 “And then after that, we were like, ‘Do we need to do the huddle?’ and [Matt] would say, ‘Yeah, ’cause I don’t want anything else falling off!” she adds.

“Yeah, we do need to do the huddle!” LeBlanc confirms with a laugh.

“After that, we always did it,” Kudrow notes, with her co-stars in agreement. The group even visits the spot where they used to share their pre-show moment, and comes together for one last backstage huddle.

The One Where They All Watch the Bloopers

Die-hard Friends fans have seen the seasons’ gag reels countless times, but watching the cast watch some of the most hilarious flubs of the series adds a brand new level of enjoyment — especially when they all gleefully celebrate Kudrow’s “most infectious laugh.” 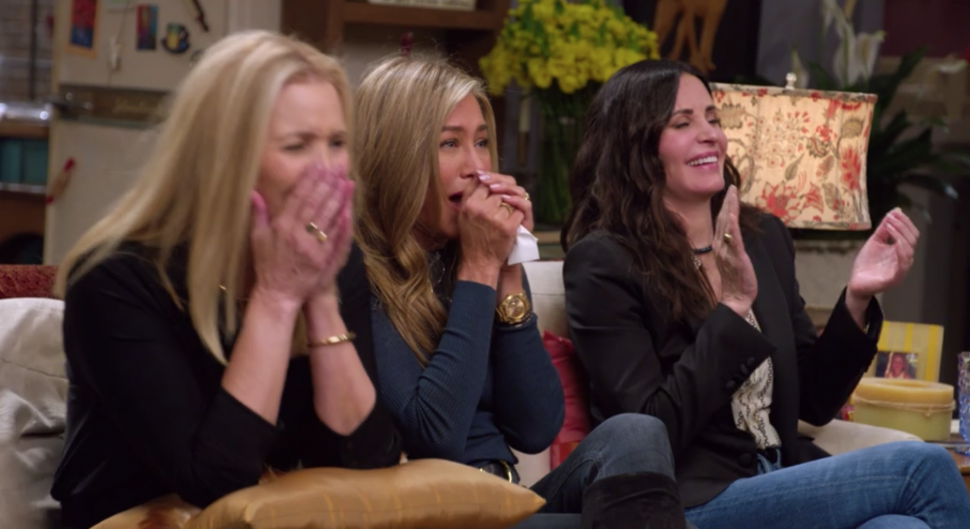 The One Where They Say Goodbye Again

As the cast and producers recall the final days of shooting on the series, fans get a peek behind the scenes with some sweet extended shots of the on-set final goodbyes. There’s a heartwarming extra-long shot of Aniston and Schwimmer holding each other after director Kevin Bright called “cut” on Ross and Rachel’s “got off the plane” reunion, and tear-jerking moments of the cast barely keeping it together during the very last scene of the series, where they all exit the apartment for one last time.

The final moments of the special return the core six back to that apartment, reminiscing once again about the unique friendship they found throughout the show’s 236 episodes. 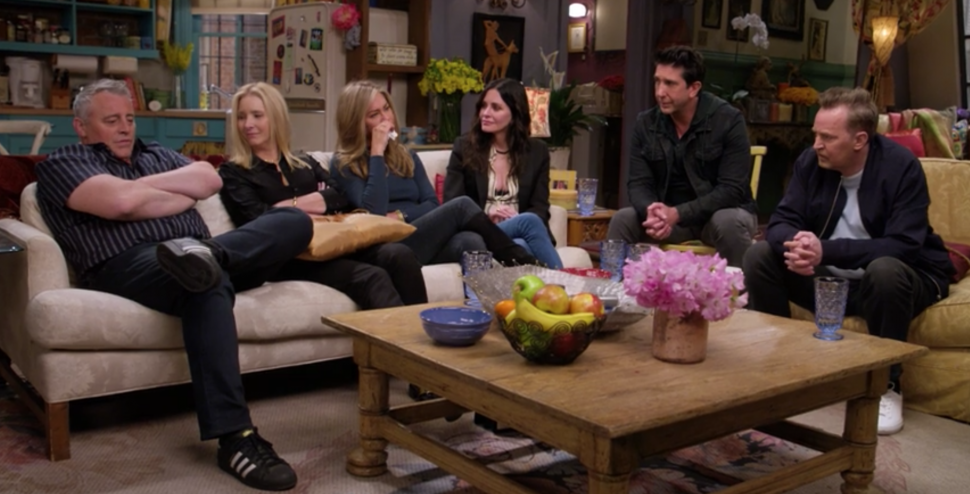 “The best way that I could describe it is, after the show was over, at a party or any kind of social gathering, if one of us bumped into each other, that was it,” Perry shares. “That was the end of the night. You just sat with that person all night long.”

“It was an incredible time,” Cox agrees. “Everything came together. We became best friends, the chemistry, the whole thing. It was life-changing and it forever will be — not just for us but for people who watch it. That’s just such a great feeling to carry forever. I’m so grateful, and I love you guys so much.”

And, as the cast gathers for one final nostalgic moment, checking out the spots where they signed pieces of the set as it was being torn down, LeBlanc gets in one more laugh. His signature simply reads, “I sh*t here.”

Friends: The Reunion is streaming now on HBO Max. See more in the video below.