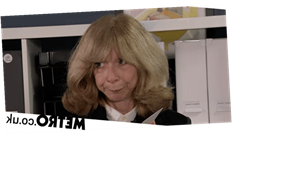 Gail Rodwell (Helen Worth) was left perplexed in Coronation Street as she discovered there was a Fanny in the family.

The matriarch was returning some old boxes of photographs from the factory to No.8, when she came across a picture of a woman named Fanny.

If you’re having a little giggle to yourself, then you weren’t the only one, as Michael Bailey (Ryan Russell) found the whole thing rather amusing.

‘I’ve never heard of any Fannys in the family,’ Gail exclaimed, much to Michael’s delight.

‘You’re as bad as David!’ she scolded, as she set off to do some investigating into the mysterious Fanny.

‘I’ll give my mum a ring, see if she knows. I wonder where Fanny fitted in?’

You’re not the only one, Gail! We’re all intrigued to know the outcome of the Fanny mystery.

Sally Metcalfe (Sally Dynevor) overheard the soap legend talking to herself, and it’s safe to say she was left in shock.

Gail racked her brains — adamant that she’s never heard of any Fannys.