Gary Numan’s appearance distracts This Morning viewers: ‘Has he done that?’

This Morning: Spin to Win contestant says to ‘call back’

Gary, 63, joined This Morning hosts Phillip Schofield, 59, and Holly Willoughby, 40, to talk about his new album, Intruder. As the show is now allowed to have guests in the studio, the musician was able to sit with the presenters, albeit two metres apart. However, viewers seemed to be more distracted by the singer’s appearance, rather than what he was actually talking about on the ITV programme. 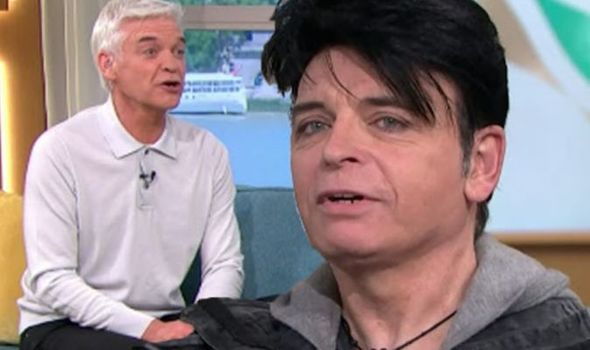 The musician sported a black coloured hairstyle and wore a dark coloured ensemble of clothing as he joined the hosts.

Taking to Twitter, one viewer wrote: “Has Gary Numan been using Just for Men – or a tin of black paint and a brush? #ThisMorning.”

Another added: “#thismorning I wonder if Gary dyes his hair?” with a third commenting: “Going out on a limb here…I reckon he might dye his hair…#thismorning.”

A fourth stated: “Gary Numan dyes his lashes, brows and hair? #thismorning,” with a fifth joking: “#thismorning That is some impressive wig, there.”

“Gary Newman is getting on a bit isn’t he #ThisMorning,” a sixth remarked as they joined the flurry of opinions about the 63-year-old.