My first thought while watching the proudly weird, thoroughly charming new comedy Ghosts was: How is this on CBS?

To be fair, the Eye network has moved past the days of “fat guy with a hot wife” sitcoms lately with a host of more thoughtful and bittersweet comedies like the recently departed Mom. But still, nothing on their primetime slate is nearly as odd or as ambitious as Ghosts (premiering this Thursday, Oct. 7 at 9/8c; I’ve seen the premiere, with advance looks at two more episodes). It doesn’t fit their comedy mold at all… but that just makes it all the more of a wonderful surprise.

An adaptation of a UK series from New Girl alums Joe Port and Joe Wiseman, Ghosts stars iZombie alum Rose McIver as Sam, who learns she just inherited a grand country estate from a great-aunt she never knew. Her chef husband Jay (Never Have I Ever‘s Utkarsh Ambudkar) is hesitant to move out of the city, but Sam has visions of turning the mansion into a cute bed and breakfast. And hey, it’s a free house, right? In this real estate market! What’s the catch? Well… 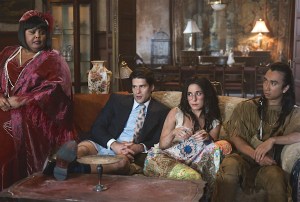 Turns out the estate is also home to an eclectic gaggle of colorful spirits who died on the property over the years, including a haughty jazz singer (Danielle Pinnock), a hippie named Flower (Sheila Carrasco) who died while trying to befriend a bear (“Drugs were involved”), a chipper Boy Scout leader (Richie Moriarty) who caught an errant arrow in the throat that’s still stuck there, and a cocky Wall Street broker (Asher Grodman) who died without pants on and bores the other ghosts with tales of his hard-partying ways. (“Tara Reid’s birthday. Enough said.”)

The ghosts don’t want Sam and Jay opening up a B&B and crowding their home with thoughtless guests, so they decide to haunt the young couple out — easier said than done, since their ability to interact with the living world is limited. (It takes a great deal of concentration just to knock a cup off a table.) But they catch a break when Sam takes a tumble down the stairs… and now she can see and hear the ghosts when no one else can. The result is an inspired mix of Beetlejuice and The Money Pit, with a spooky, goofy energy that isn’t remotely like anything else on broadcast TV. 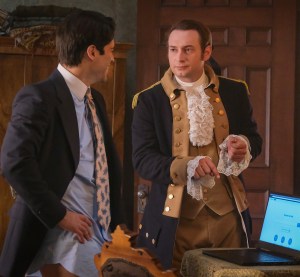 The chorus of ghosts is a comedic masterstroke: They’re a mismatched group of oddball personalities who don’t exactly love each other but are stuck together for eternity, like reluctant coworkers. (They don’t even share the same cultural references, since they died centuries apart.) It’s a superb cast full of fresh faces dropping quotable one-liners left and right. Every viewer will have a different favorite ghost, and there are no wrong answers here, but Brandon Scott Jones — so great on The Good Place and The Other Two — is an early standout as colonial dandy Isaac, who resents Alexander Hamilton’s fame and takes a not-so-secret liking to Jay.

Ghosts also shares a bit of What We Do in the Shadows‘ silly, supernatural sense of humor. (When Sam attempts to cleanse the space with sage to ward off evil spirits, the ghosts kind of like it: “It’s actually delightful!”) McIver is bubbly and appealing as Sam, and her newly acquired sixth sense sets up all kinds of storytelling possibilities going forward. But let’s be real: How much “going forward” does Ghosts actually have? I mean, I hope a comedy like this can find enough of an audience to survive past a single season on CBS… but I don’t have a lot of faith that it will. Maybe if we’re lucky, Paramount+ will pick it up for future seasons, and it can be as weird as it wants to be. But while it’s here, let’s at least appreciate it while we can. After all, as the ghosts would tell you, even the best things don’t last forever.

THE TVLINE BOTTOM LINE: Ghosts is probably too weird to survive on CBS, so enjoy this supernatural oddball before the cancellation axe falls.