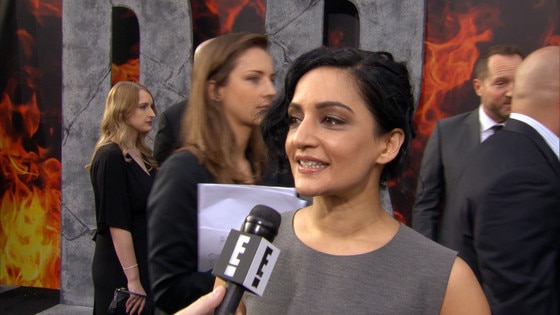 It’s been years since she left The Good Wife and Archie Panjabi is still getting asked about her rumored feud with Julianna Margulies. But she’s not talking.

When asked about the rumored behind-the-scenes tensions in an interview with The New York Times, Panjabi wouldn’t play ball. “You’re very naughty, Jessica,” she told the interviewer.

During season four of The Good Wife, Panjabi and Margulies stopped sharing scenes together. Their characters, Kalinda Sharma and Alicia Florrick, were friends up until the end of season two when Alicia learned Kalinda previously slept with her husband before the two knew each other. The tension on screen defrosted, but what went on behind the scenes remains a secret. And will remain a secret as far as Panjabi is concerned.

“Let’s put it this way. We are living in a world where everybody wants to know everything. I completely understand why everyone asks about it. Everybody I meet asks me about it, in some roundabout way. I just feel like, I’m doing work because of that character. Before Kalinda, I was always coming in for a few lines and it was hard to get roles. If people always want to know what happened, OK, it’s a small price to pay for all the wonderful things that show has given me. It sounds diplomatic, but it’s how I feel,” Panjabi said when asked if she was surprised people are still interested in knowing what happened.

In Panjabi’s final episode, she appeared to film a scene with Margulies—appeared being the key word. They shot it separately and it was put together with CGI. Panjabi said feels “the Alicia and Kalinda scenes were one of the highlights of the show,” and she is “very proud of them.” But that’s all she’s saying about what happened behind the scenes. “I’ve said what I’m going to say,” she told The New York Times.

Margulies addressed the rumored feud in 2015.

“Right, I’ve heard about [the feud]. Who says that? It’s totally gossip,” Margulies said at The New Yorker Festival, according to Vulture. “I heard that question had been asked to [co-creator] Robert King. There’s no story there, sorry … I actually had heard [that rumor] and I feel that it has been talked about and answered. I feel people just like to have gossip or make something into something that isn’t there. There’s no animosity on my part. It’s a shame, because I wonder if it was two men, when one finds out that he f–ked his best friend’s wife, if it would get that same attention, you know what I mean?”

The Good Wife ran for seven seasons from 2009-2016 on CBS. Panjabi left the show at the end of season six. The Good Fight, a spinoff starring Christine Baranski and Cush Jumbo, is in its fourth season on CBS All Access, but don’t expect to see Panjabi on there.

“I still get a lot of love for her, but she came in as a mystery and she left as a mystery. I don’t know if bringing back a character like that feels right,” she said.