Good Morning Britain got very chaotic this morning as an angry guest announced he was going to “show [his] balls”.

Hosts Kate Garraway and Ranvir Singh were leading a debate about whether Father’s Day should be scrapped, featuring Fathers 4 Justice campaigner Matt O’Connor.

And there was shock in the studio when Matt suddenly leapt out of his chair and unleashed an odd tirade about his alleged treatment behind-the-scenes on the breakfast show.

“I’ve just got to say one important thing here,” he said. “I was treated like an outcast today in the studio, I was put – not in the green room with Ollwyn – but dumped outside.

“I’ve got to say one thing, I’m going to show you my balls.” 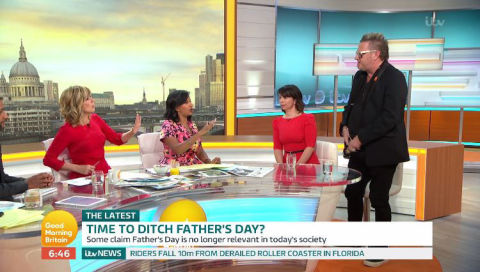 He then proceeded to undo his belt and trousers, with a horrified Kate and Ranvir shouting “No!” and holding up their hands.

Thankfully, Matt then pulled out some pink balloons from his jeans and started throwing them, while shouting: “Balls. Balls to a fatherless Father’s Day.”

Ranvir attempted to calm the situation by apologising to Matt if he had been upset by anything while on the show, as Kate explained: “That will be a technical reason. It’s how we conduct our debates. We always separate guests that are going to be part of the debate.”

However, he wasn’t backing down, adding: “I have been coming here for 20 years and I have never been treated like that.” 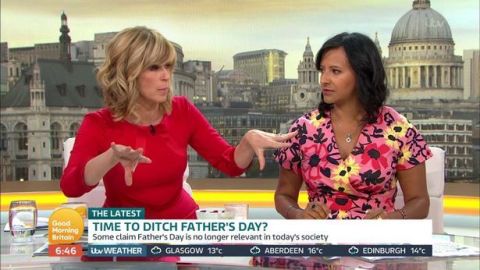 Kate’s sympathy was very limited, however, as she told him: “I think you’ve slightly let dads down there.”

A spokesperson for Good Morning Britain told Digital Spy of the campaigner’s claims: “Matt O’Connor was invited on to GMB this morning to debate the role of Father’s Day in today’s society. Rather than engage properly in the debate he decided to pull an obviously pre-planned publicity ‘stunt’.

“His unfounded claims on ‘being treated so badly’ were seemingly part of this pre-planned ‘stunt’. As Kate said, it is the norm to separate guests before taking part in a debate on the programme, and as Ranvir said on air, we have never had any such comments previously and pride ourselves on treating all of our guests equally well.”

Viewers were left almost choking on their morning toast:

And a production source didn’t seem all that impressed with Matt either, telling DS that they thought “pulling his trousers down on live breakfast TV when children could be watching was ill-judged and embarrassing”.

Good Morning Britain airs on weekdays from 6am on ITV.