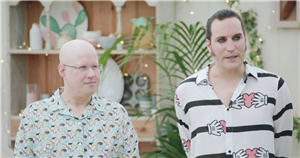 Fans of The Great British Bake Off were left fuming on Tuesday night, as the hit Channel 4 cooking show was 'ruined' by an abundance of technical issues.

As the bakers took to the tent for their second week of baking to impress the judges, fans first spotted their tellies had stuck on an advert for the National Dog Survey.

When the show finally did air, many viewers were experiencing audio problems that rendered them unable to properly hear what was going on with the bakers, judges and presenters as they moved around the tent.

And, to make matters even worse – the subtitles also weren't working.

Taking to Twitter to vent their frustrations, one fan wrote: "No subtitles during #GBBO! Thanks @Channel4 now I got to rely on raw talent – the talent that is listening to what other people have to say instead of looking at the words on the bottom of my screen!"

Someone else moaned: "What's going on with sound on the voice-over tonight? Really annoying, can barely hear it! #GBBO."

And a third fan tweeted: "The absolute panic that went through me when the TV froze just before #GBBO was not normal!"

Another viewer had posted a screenshot of the – quite frankly, adorable – dog advert, writing: "TBF If the TV froze like this for 90 mins we wouldn't complain! #GBBO."

"I thought it was my TV but then checked Twitter and saw it's affecting everyone! #GBBO is one of my fave programmes – it's not quite the same missing out on the dialogue and banter! So many people affected, not sure why it hasn't been fixed by now?" someone else mused.

While another fan couldn't help but quip: "BREAKING: Army sent in to sort Channel 4 out! #GBBO."

However, fans were soon cheered up as they delved deeper into Biscuit Week, and watched the bakers do their best to recreate the classic Jammie Dodger.

But with them renamed 'Jammie biscuits' for the show, some fans couldn't help but point out that the 'cringe' nickname felt like a "swearword".

"Jammie biscuits feels like a polite replacement for a swearword!" someone penned on Twitter, as another giggled: "'Sandwiched jammie biscuits' aka we can't say Jammie Dodgers!"

Someone else moaned: "'Jam biscuit'. Just call it what it is. We all know!"

Earlier in the show, one of the contestants wasn't allowed to refer to McDonalds as she attempted to describe a deep fried apple pie from a popular fast food joint.

The move had the audience at home in hysterics, with one giggling: "Just say McDonalds!"

Another followed up: "Jammie Dodgers, Nutella and McDonalds apple pie. Just say what you're on about! We all know!!"

The Great British Bake Off continues next Tuesday at 8pm on Channel 4.