Charlie Pickering, what a disappointment! Your interview with Richard Dawkins on ABC's The Weekly was so deferential. Perhaps you should have let Tom Gleeson loose on him? It would have been good practice for the day that Richard – if wrong – finds himself face to face with the god he cannot allow to exist. Deirdre Baker, Thornbury 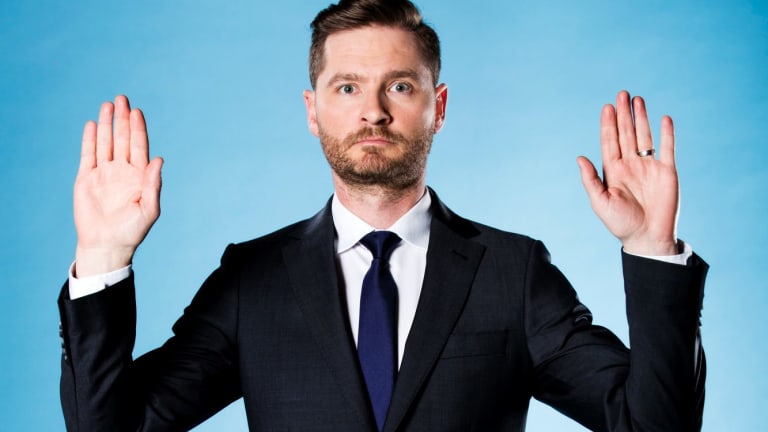 Charlie Pickering, host of The Weekly on ABC.

I watched Channel Nine's 60 Minutes special, which promised "revelations" about the disappearance of Flight MH370. All I learnt is that the program was basically an ad for a new book on the topic.

It's bad enough that ABC's Gardening Australia continues to employ the untidy and overacting Costa Georgiadis, but in the latest episode they showcased an "up-speaking" doctor. (Like schoolchildren, each sentence sounds like a question.) The segment was interesting, but the upward inflections were hard to take. It seems this unstoppable and unsettling habit is gaining older devotees.

The ABC will need to tighten the purse strings. May I respectfully suggest that cutting the two morning presenters on ABC Radio down to a sensible one would be a good start?

Red sails in the sunset

Michelle Guthrie reportedly claims that 80 per cent of Australians value the ABC. She's dreaming. With the Trotskyites on ABC's board having keelhauled Red, how can they expect us to get up at 5.30am now?

All those people not enjoying Jacinta Parsons and Sami Shah on ABC Radio should switch to Radio National. I did, when the wonderful Lynne Haultain was replaced. I've never looked back.

Thank goodness Eleanor Kite (Letters, 10/5) wrote to comment on the poorly fitting trousers of ABC News Breakfast weatherman Nate Byrne. I thought it was just me thinking he'd stuffed his footy socks down there! He's a great weather presenter, but it's time he visited the tailor.

On a recent episode of ABC's The Drum, during a panel discussion about assisted dying, Dr Kerryn Phelps said that old age was not a terminal illness. It's not an illness – but it certainly is terminal.

One way ABC could appeal more to younger (and some older!) viewers would be to can its various repeats on Friday nights and start showing Rage earlier. I've just wasted an hour-and-a-half hour on stuff I've already watched.

Congratulations to SBS for the superb investigative journalism on Dateline. If readers did not see the May 15 episode, I urge you to watch it on SBS on Demand. It showed the real story of the genocide being carried out on the Burmese Rohingya people of Rakhine State in Myanmar. There is unbelievable footage of atrocities and compassionate interviews with the victims. It is not easy viewing, but it is important that people are aware of what is happening. Valerie Campbell, Mornington

So now SBS is trying to adopt the Terry Wogan-style of commentary for Eurovision by grumpy Anglo male comedians and snobby celebrities with inane comments. The diversity of Eurovision should be represented by a diverse panel who aren't so shallow. Where was the acerbic wit of Lee Lin Chin and other SBS stars who understand it's not just about the songs and kitsch, but the emerging identities of LGBTQI communities across Europe and the world?

Has Michelle Guthrie also taken the reins at our beloved SBS? If you're an intelligent host or guest, look out – your days are numbered. Please, Julia Zemiro and Sam Pang: come back to host Eurovision.

Eurovision was nothing more than a cacophony of rhythmic noise without melody and a distasteful lighting extravaganza. Mark Dymiotis, Hampton

The first television series of Margaret Atwood's novel, The Handmaid's Tale, was excellent: a wake-up call to lapsed feminists everywhere. Offred and her sister handmaids' degradation at the hands of a radical male-dominant society was mostly true to the book. The second series has deteriorated to nothing more than a soap opera. Did it need to be made? Dawn Evans, Geelong

What would Myra Fisher suggest Janice Petersen wear on SBS World News? (Letters, 17/5). A twinset with pearls? A mid-length skirt? Flatties? For goodness sake, let the news itself be your focus.

It's good night from him

Now that we have newsreaders dressed casually for the 5pm bulletin, should we expect to see the late-night readers in their pyjamas?

Eric Peterson seeks other viewers' opinions (Letters, 17/5) about background music in documentaries. I often find it impossible to follow dialogue because of the overwhelming music, which I regard as superfluous. Reluctantly, I switch to another channel. Stuart Molony, Mount Martha