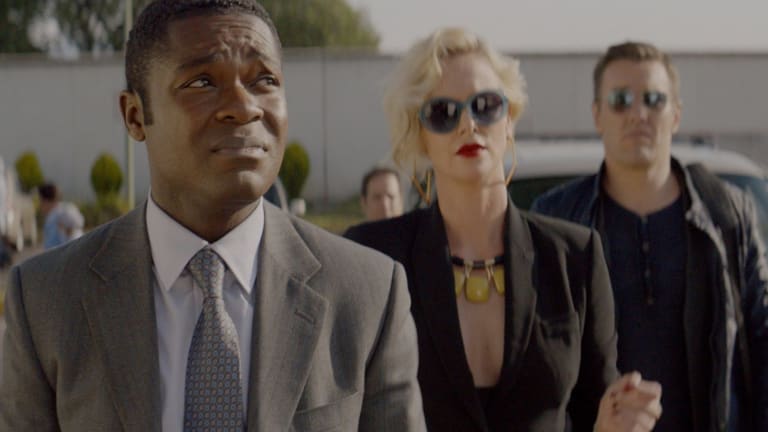 Life may be full of coincidences, but screenplays cannot be. One definition of the perfect thriller might be that everyone does something for a reason, and there are consequences, not coincidences.

If you're introducing comedy, then coincidence can get a look in but audiences won't tolerate many, unless they're laughing too hard to care. O Brother Where Art Thou? has coincidences, but the Coen brothers make sure we know it's an alternate universe, with different rules. Rear Window does not; everything happens for a reason in that most perfect Hitchcock thriller.

Gringo is a comedy thriller made by Australians, written by Americans, funded by Amazon Studios, and set largely in Mexico. It's neither funny nor thrilling, but it does have a truckload of coincidences, a sign of laziness in script and direction.

It also has an astonishing cast, for reasons hard to fathom. The internet tells me that Charlize Theron​ signed on in May 2014, but it was another 18 months before David Oyelowo​, Amanda Seyfried​ and Joel Edgerton came on board, followed a few months later by Thandie Newton. There is a clue in the delays: someone had their doubts. Theron is credited as executive producer and her clout may have attracted the others. Joel Edgerton's brother Nash directs, in his second feature after The Square.

So what went wrong? Let's start with Elaine Markinson​, the character played by Theron. She's the man-eating co-owner of a Chicago pharmaceuticals company that has been selling part of its inventory to a Mexican cartel boss, known as the Black Panther (Carlos Corona). When we first meet her she is being rogered by her co-owner Richard Rusk (Joel Edgerton) in the back room of his plush, high-rise office.

David Oyelowo, with an African accent, is Harold Soyinka, their senior executive, a mild-mannered honest man whose main problem is that his wife (Newton) spends all his money.

The plot kicks off with a frantic phone call from Harold from Mexico: help, I've been kidnapped and they want $5 million. Elaine, a gold-plated harridan, is typically firm: no deal at that price, they'll have to come down a lot. We flash back two days, to when Rusk tells Harold they have to whizz down to Mexico to straighten out a problem at their production lab.

So now we have several deadly sins lined up: lust, greed, pride, with a hint of envy and gluttony. More modern vices pile in behind – betrayal, adultery, drug-trafficking, murder, extortion and cutting off toes with bolt cutters.

At least a dozen support characters come barrelling in, trying to get a piece of the action. It's like an Elmore Leonard crime caper from south of the border – but that brings us to one of the problems. Everyone knows Mexico has a big problem with violent drug cartels and crime, but Gringo would make you think the whole country is a criminal enterprise. That's because the filmmakers demand that everyone Oyelowo meets must be on the take.

So Harold checks in to a fleapit motel but the bartender happens to work for the cartel; funnily enough, the innocent American girl Sunny (Seyfried) that he met on the plane, and her drug-mule British boyfriend (Harry Treadaway​), are staying across the hall; and the two Mexican brothers who run the place (Diego Catano​ and Rodrigo Corea) would sell him to the cartel for 10 bucks. The real Mexico City may hold 20 million people, but they all seem to know each other in this version of reality.

Nash Edgerton does not quite get control of the performances here, starting with Theron, but that might be because she was his boss. She wrecks every scene she's in, straining too hard as sexpot siren.

Joel Edgerton, by contrast, is ever-reliable as a villain. Oyelowo is positively heroic, trying to hold the picture together with his innocence. Sharlto Copley, as a former mercenary trying to reform, is the film's best asset, an authentically entertaining psycho. When he bowed out, my heart sank. I was hoping he'd shoot most of the other characters and put an end to the whole sorry mess.